How much global warming will we get in the future? That largely depends on how much extra carbon-dioxide humans put in the atmosphere. And that — in large part — hinges on how much coal China ends up burning in the years ahead.

how hot will the world get? A lot depends on how much coal china burns

China has been growing rapidly — and with 1.3 billion people, it needs a staggering amount of energy. Currently, 65 percent of that energy comes from coal, the most carbon-intensive of all fossil fuels.

How significant is this? Over the last decade, fully half of the global increase in carbon-dioxide emissions has come from growth in China's coal consumption.

So, understandably, there's a lot of interest in how much coal China will keep using in the years ahead. Greenpeace has just put out an optimistic new report suggesting that China's decade-long coal boom might soon come to a close, due to slowing economic growth and new crackdowns on air pollution. And it's not just Greenpeace. Other analysts, including Citigroup, have been making similar predictions of late.

If China's coal boom really is waning — and that's still a big "if" — it would be a huge deal for climate change. In theory, the end of China's coal boom would make it a lot easier for the world to slow down global warming. But there's a catch: China would still need to deal with all of its existing plants. And that's much more difficult. 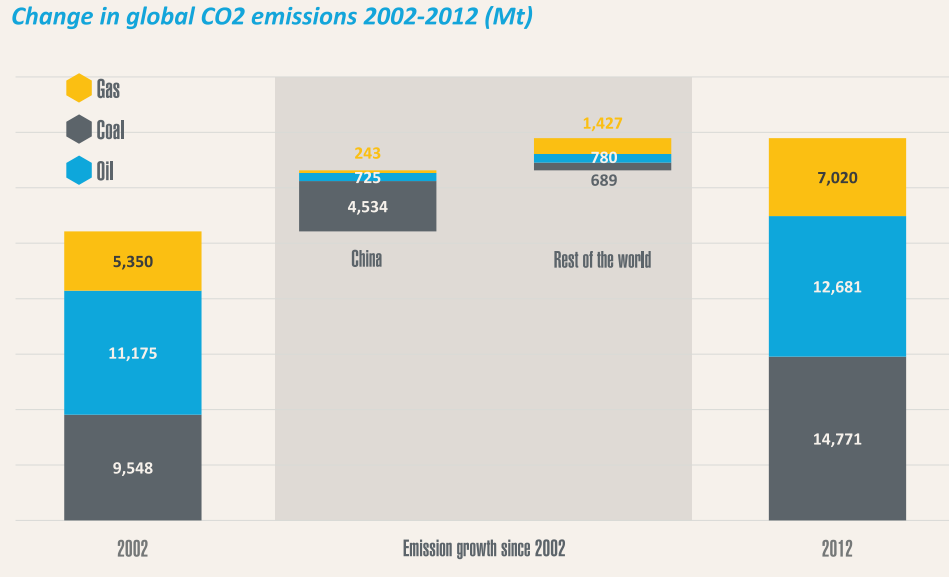 Between 2002 and 2012, the amount of carbon-dioxide emissions that humans emit each year rose by about 8.4 billion tons. More than half of that growth — 4.5 billion tons — came from China's increased coal use.

If these trends continued indefinitely, the world will be on pace for a very destructive 4°C (or 7.2°F) of global warming by the end of the century, according to the Intergovernmental Panel on Climate Change (IPCC). So there's a fair bit of interest in making sure these trends don't continue.

2) But China's coal growth is now starting to slow... 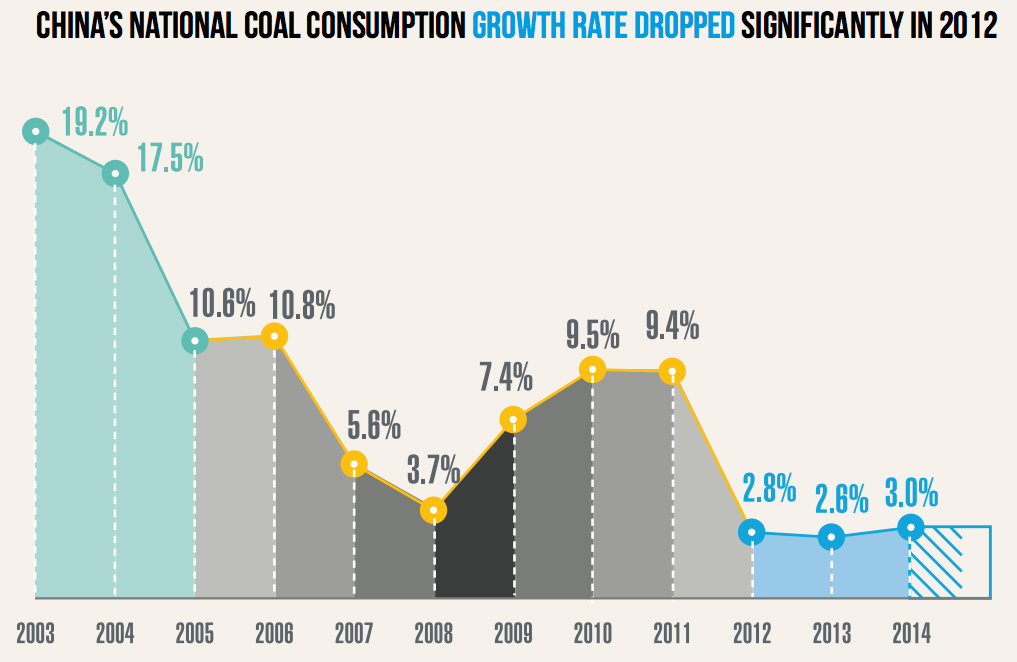 The chart above offers one sign that past trends might not continue. The frenetic increase in China's coal use over the past decade appears to be slowing down. (That is, coal consumption is still rising, but at a much slower pace than before.)

That's partly because China's economy is starting to grow more slowly (not good). But China is also getting more efficient, gradually diversifying away from heavy industry, and building cleaner solar, wind, and hydroelectric plants. And part of this is motivated by an effort to reduce air pollution.

Coal-burning power plants, after all, create smog and plenty of other types of air pollutants besides carbon-dioxide. And many of China's cities have become overwhelmed with dirty air — one study found that coal pollution in northern China is shortening people's lives by 5.5 years, on average. So, in response, some areas are putting new restrictions on coal and promoting cleaner sources of energy.

3) And many provinces are now cracking down on coal 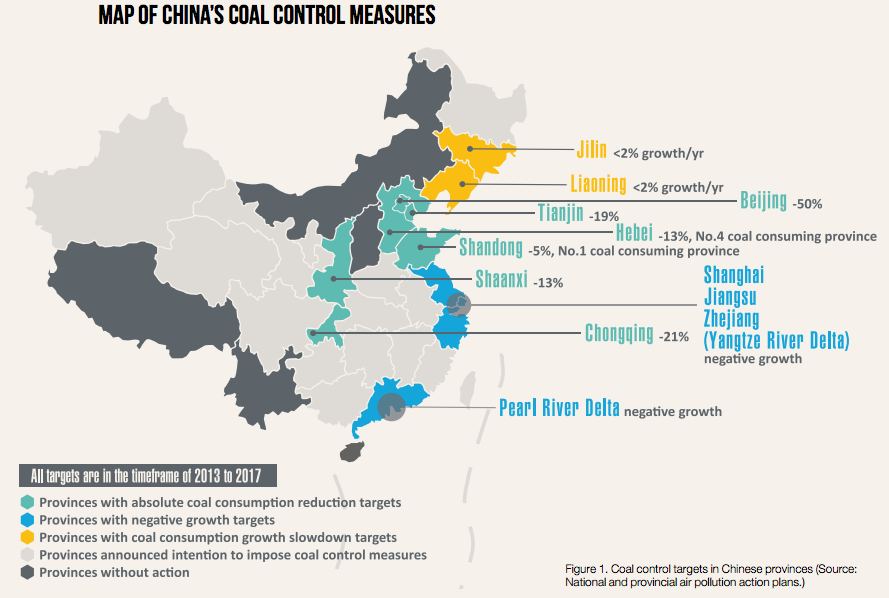 A number of China's provinces have now set various targets for limiting coal consumption between 2013 and 2017. And at least some analysts think these measures could eventually have an impact. Analysts at Citigroup, for one, predict that China's coal use could peak by 2015. BP envisions China's coal use peaking around 2020 or so.

still, there's no guarantee that the limits on coal will actually work

Still, it's worth being cautious about these predictions. There's no guarantee that these targets will actually pan out — enforcement of China's environmental laws can often be spotty.

What's more, China's plans to limit coal use depend on the country being able to ramp up nuclear power and use fracking technology to drill for shale gas. That may not pan out, either: companies are finding that it's not nearly as easy to frack for shale gas in China as it is in the United States — for a variety of geological and regulatory reasons. 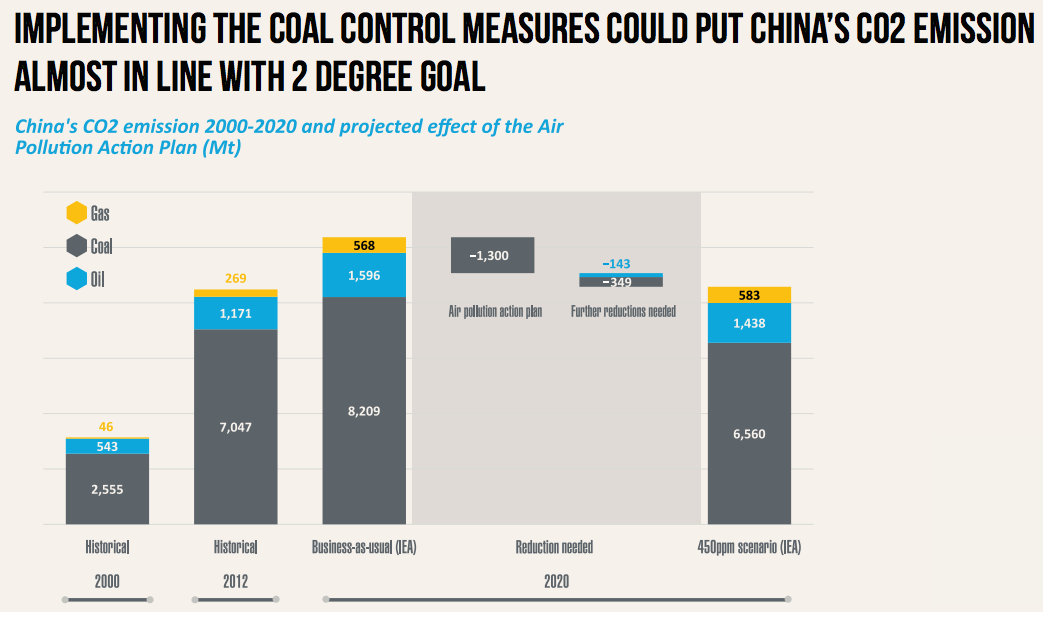 Most of the world's nations have agreed to try to limit global average temperatures from rising more than 2°C above pre-industrial levels. Last week, the IPCC said that it was impossible to do this unless 1) global emissions peaked fairly soon and 2) emissions started declining at a rapid rate.

As the Greenpeace report notes, a global emissions peak looks more likely if China manages to rein in its coal use. In fact, China's curbs on coal consumption could be far more important to global climate policy than anything the United States or Europe is currently doing.

But there's a catch. It's not enough for global emissions (and, by extension, coal consumption) to peak. They also have to start declining rapidly. And right now, China has no clear plan for doing that. 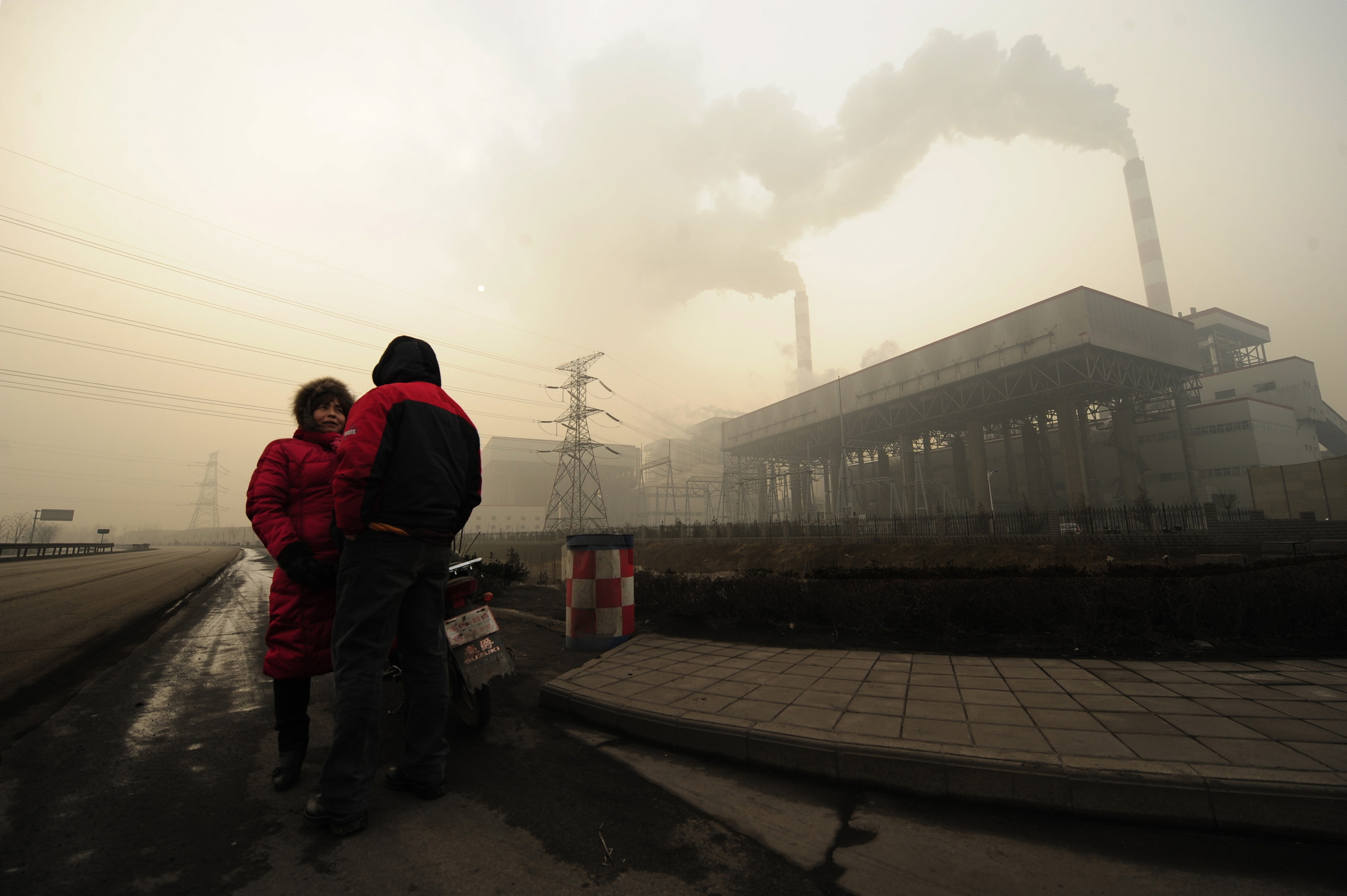 This photo taken on December 8, 2009 shows two people talking outside a coal powered power plant on the outskirts of Linfen, in China's Shanxi province, regarded as one of the cities with the worst air pollution in the world. PETER PARKS/AFP/Getty Images.

Here's the inconvenient news: Even if China does slow down its pace of coal consumption, as Greenpeace predicts, the power plants that have already been built are going to stick around for many decades, continuing to pump carbon-dioxide into the atmosphere. (The majority of China's plants have been built since 2000, and they can operate for 30 to 50 years.)

Last July, Armond Cohen of the Clean Air Task Force argued that China was less likely to see "peak coal" than a "long, high plateau" for coal. That's why, he notes, tackling climate change will require "directly address[ing] the multi-decade carbon emissions from China's coal fleet as it exists today and as it will exist in 2020 and 2030."

One possibility is that China could start using technology to capture carbon emissions from its existing power plants and burying the carbon underground. But this "carbon capture and sequestration" technology is still in the early stages, and it's not clear whether it will be feasible on a massive scale.

Add it all up, and even with the coal slowdown, many experts think Chinese carbon-dioxide emissions won't start declining until the 2025 or 2030. See this interview with Chinese scientist Ye Qi for more on that.

It's also worth noting that other projections have India and other developing countries supplanting China's coal use in the decades ahead. See p. 68 of BP's most recent Energy Outlook. So even though China is the biggest coal and climate story today, that may not be true in the decades ahead.

Short version: The apparent slowdown in China's coal consumption is relatively good news for those hoping we can avoid drastic global warming. But it's not nearly enough.