No, this study doesn't show marijuana wrecks your brain

Share All sharing options for: No, this study doesn't show marijuana wrecks your brain

A new study found casual marijuana use correlates with differences in a person's brain structure, but contrary to some of the internet's more overwrought reactions, the findings don't show the drug will wreck your brain.

The study published Tuesday in the Journal of Neuroscience found using marijuana just once a week correlates with differences in the brain.

"As a general rule, people tend to think of marijuana as a safe drug or less risky as other drugs out there," says Anne Blood, one of the researchers involved in the study. "That was one of the reasons we did this study."

The findings don't mean that marijuana leads to behavioral changes. Researchers only found that casual marijuana use correlates with differences in the brain at some level, and they didn't extrapolate beyond those findings.

"Whenever you change the brain there’s going to be some impact. Whether or not it changes your life is an open question."

Blood, in fact, says she can't comment on how the detected differences could affect a casual marijuana user. That's an issue for future study, she insists.

"We don't know for sure what this means from a behavioral perspective," Blood says. "Whenever you change the brain there's going to be some impact. Whether or not it changes your life is an open question."

Blood does, however, suggest the differences are meaningful.

"Because these structures are so important, … a change in the way they're processing information is really worrisome in terms of where this might go down the road," she says. 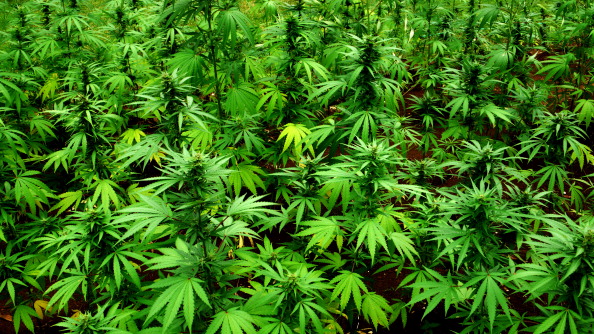 Those plants might not cause the differences. Kevin Cummins / Hulton Archive

Two issues the study didn't clear up: whether the differences are permanent or even caused by marijuana.

For the study, researchers asked participants between the ages of 18 and 25 to estimate their marijuana use for the past three months. Those placed in the group of marijuana users reported using marijuana at least once a week during the three-month time span. The other group claimed to be marijuana-free for at least one year and reportedly used marijuana less than five times in their lifetime. Both groups had their brains scanned, and the images were analyzed by researchers.

Because the study ended there, researchers never analyzed if the detected differences persisted over time. Blood acknowledges the issue as one of the study's limitations, but she cautions that it's rare the brain fully reverses major changes.

The study also didn't identify whether marijuana caused the detected differences. It's possible, for example, that people with different brain structures are more likely to use marijuana. But because the amount of marijuana use correlated with more variations in brain structure, Blood says she's fairly confident the two factors are linked.

Still, Blood acknowledges the issue is sensitive as states, particularly Colorado and Washington, and advocates ramp up their legalization efforts.

"If we were in the middle of alcohol prohibition, I think people would get as defensive about a similar study for alcohol," she claims.

Instead of shaping the policy debate, Blood hopes the research will allow her team to obtain funds for a bigger study. That will let researchers make improvements to some of the current study's limitations — the sample size and time span, for example — and find out what, exactly, these type of differences in the brain could mean for current and former marijuana users.