Share All sharing options for: Scientists found a planet 500 light-years away that could be just right for life

On April 17, an international team of astronomers announced big news: the first discovery of a distant planet that's roughly earth-sized and might be the correct temperature to allow for liquid water.

The planet, named Kepler-186f, is one of at least five planets orbiting a star about 500 light-years away. But unlike the other four planets, Kepler-186f is far enough away from the star that water could persist in a liquid state — instead of boiling off as a vapor. That raises the exciting possibility that life could evolve on the planet's surface.

Here's a look into the science of exoplanets, how astronomers found this one, and why it's such a big deal.

What is an exoplanet?

An exoplanet is any planet that orbits a star other than the sun. For most of modern history, it was uncertain whether planets even existed in other solar systems, but as our technology has improved, we've learned that they're quite plentiful.

Since the first one was discovered in 1988, astronomers have found a total of 1,780 planets, with new discoveries happening faster all the time — in February, the existence of 715 previously unknown planets was revealed in a single announcement. 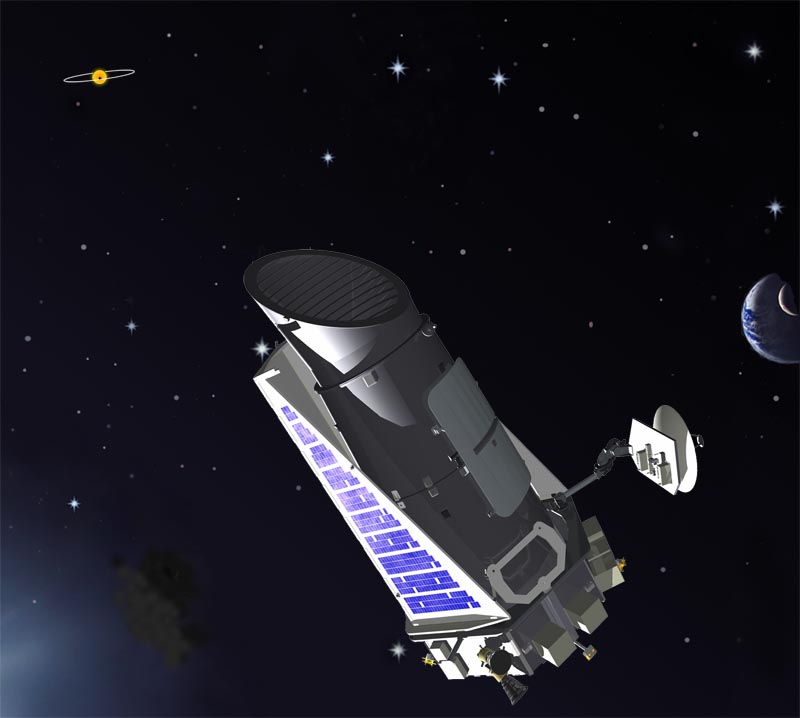 An illustration of the Kepler telescope. NASA

NASA's Kepler space telescope, launched in 2009, is responsible for most of these discoveries. Kepler takes extremely high-resolution images of deep space, and astronomers analyze these images to spot distant planets.

Unfortunately, the telescope was temporarily shut down in May 2013, when a key piece of equipment failed. NASA is currently planning a secondary mission for Kepler that will allow it to keep collecting data despite these limitations.

Additionally, the software used to analyze Kepler's existing images has continued to improve. Around the time Kepler was put out of service, the team of scientists used the software to go back over the data from one particular star — which had already been found to have four close-in planets — and discovered they'd missed one.

How do astronomers find these exoplanets?

There are a few different methods used, but the most straightforward technique is responsible for the vast majority of exoplanet discoveries, including this one.

Imagine staring at a star far away. If there were a planet orbiting that star, it would occasionally pass in front of it, temporarily blocking it from view. Scientists can't actually see the planets doing this blocking, but they can indirectly detect it.

when a planet passes in front of a star, it blocks some of the starlight

"We measure the brightness of a star, and when a planet passes in front of it, it blocks out some of the starlight for a period of a few hours," says Thomas Barclay, one of the astronomers behind the new discovery. If a star dims by a consistent amount on a predictable schedule, they can figure out that it's due to an exoplanet occasionally blocking some of the light.

In this case, Barclay and others found a solar system with five planets — which means five different predictable dimmings, all happening on routine schedules. In this graphic, each of the five planets orbits the yellow star in the middle, with a graph of the amount of light from that star reaching Kepler below.

What makes this new exoplanet so exciting?

The primary goal underlying the search for exoplanets is our hope of finding extraterrestrial life. Nearly all the planets we've found so far, though, don't appear to have the right conditions for the evolution of life, at least if it looks anything like life on earth. Most are either too close in to their stars (which would cause all water to boil away, like on Venus) or too far away (which would freeze all water, like on Mars).

Kepler-186f is exciting because it's the most similar exoplanet to earth discovered so far. One reason is that it seems to be in its star's habitable zone — often called the Goldilocks zone, because it's not too hot and not too cold. Though the planet is towards the outer, colder edge of this habitable zone, it's possible that liquid water — which we believe to be necessary for life — could persist on its surface. "It doesn't receive quite as much sunlight as earth, but close," Barclay says. "Midday on this planet would be about as bright as about an hour before sunset on earth." 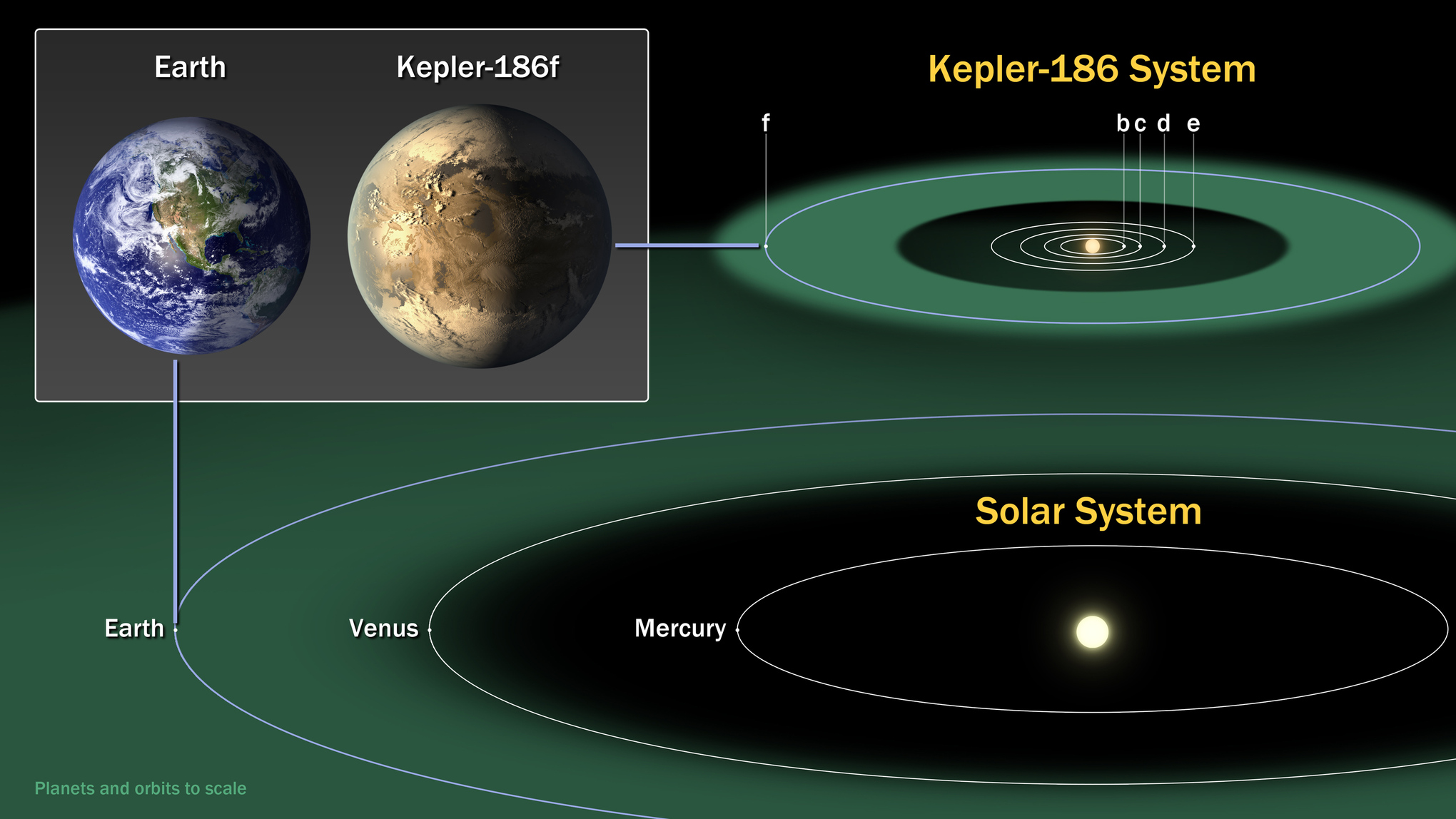 Kepler-186f orbits as closely in to its star as Mercury does to the sun, but because the star is much dimmer, it's within the star's habitable zone (shown in green). NASA Ames/SETI Institute/JPL-CalTech

We've previously found other exoplanets in their stars' habitable zones, but all of them were larger than earth, and would probably be made up largely of gas — like our solar system's gas giants, Jupiter and Saturn — instead of rock.

Kepler-186f has a diameter that's just 10 percent bigger than earth's, so like our planet, it's probably made up of rock, iron, ice, and water — the sort of environment we believe is most conducive to the evolution of life.

Could there be life there?

Possibly, but there's at least one major hangup: even though Kepler-186f seems to be within its star's habitable zone, it might still be too chilly for liquid water to form. But if the planet has atmosphere, like earth's, it would trap some heat through the greenhouse effect, potentially making the planet warm enough. Unfortunately, the planet is too far away for us to be able to tell if it has an atmosphere or not.

There are also a few other obstacles that could prevent life from forming on Kepler-186f. Because it orbits a red dwarf (a relatively dim star, compared to our sun), it needs to be pretty close in to fall within the habitable zone. This could leave any life on its surface especially vulnerable to harmful radiation from solar flares.

The planet still might be too chilly for water to form, unless it has an atmosphere

Additionally, the planet might be tidally locked — meaning that the same side of it always faces in to its sun — which is believed to make life less likely, because there'd be no night and day. One side of the planet would be always be frozen, and the other side too hot for life.

Even if all the conditions on Kepler-186f were right for life, that's no guarantee it'd actually evolve — on earth, it took about a billion years for single-celled organisms to evolve after the planet was fully formed. One aspect of the planet that might make it more likely, though, is that red dwarves age more slowly than stars like the sun, so its star's extended lifespan could provide billions of extra years for life to potentially evolve. 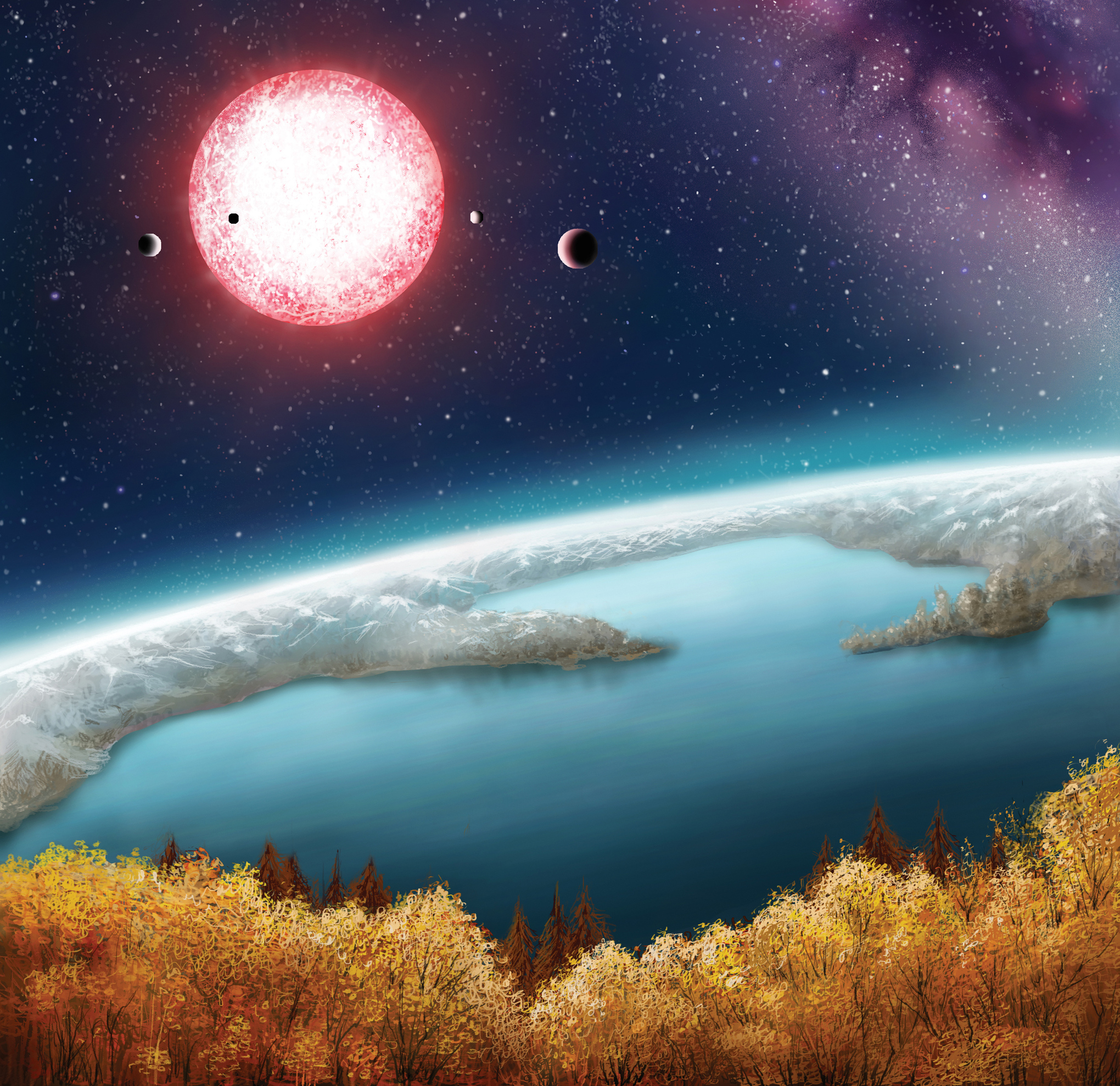 An artist's illustration of what the surface of Kepler-186f might look like if it has an atmosphere. Danielle Futselaar

Can we go visit it?

So what are scientists going to do next?

This is more of a stepping stone in the search for earth-like planets and extraterrestrial life than a destination. Because the star is so far away, we can't really tell if it has an atmosphere or learn much more about it, and definitely can't visit it.

So astronomers like Barclay and the hundreds of others looking for exoplanets will use this as evidence that earth-sized planets can form in their star's habitable zones, and search for others closer to us. The discovery is particularly exciting because the majority of stars in our galaxy are red dwarves like Kepler-186, so there may be many more exoplanets similar to this one out there.

Although the Kepler telescope is no more, there are several telescopes in development that will help us find more exoplanets — such as NASA's James Webb Space Telescope, set to launch in 2018, and the Giant Magellan Telescope, a land-based instrument in Chile that will be finished in 2020. You can expect to hear of many new exoplanet discoveries in coming years — both from these new telescopes and old Kepler data — and hopefully some will be of earth-sized planets close enough for us to learn more about.

Why does this new planet have such a boring name?

Unfortunately, the naming of exoplanets (along with all astronomical objects that are far away) follows a set of conventions that don't readily lend themselves to public excitement.

In this case, the the planet's name is simply the star (Kepler-186, the 186th star found by the Kepler telescope that has a planet orbiting it) and a letter denoting how far out the planet is from the star (there's never an "a," so the inner four planets in this system are "b," "c," "d," and "e").

Correction: This post originally stated that the Kepler telescope was permanently shut down, and did not mention the possibility of its secondary mission.