Study: On economics, Obama's judges are the most liberal in 50 years

Share All sharing options for: Study: On economics, Obama's judges are the most liberal in 50 years

How liberal are President Obama's judges? A new study by two political scientists tries to answer that question. Robert Carp and Kenneth Manning examine about 50,000 federal judicial opinions between 1932 and 2013, including 683 by Obama's district court appointees, and code each opinion as liberal or conservative.

Overall, Obama's judges basically resemble nominees of other Democratic presidents — except on decisions about economic or labor regulation. There, Obama's judges are the most liberal of any president studied (going back to John F. Kennedy). Note that the study only includes district court judges, not Supreme Court judges: 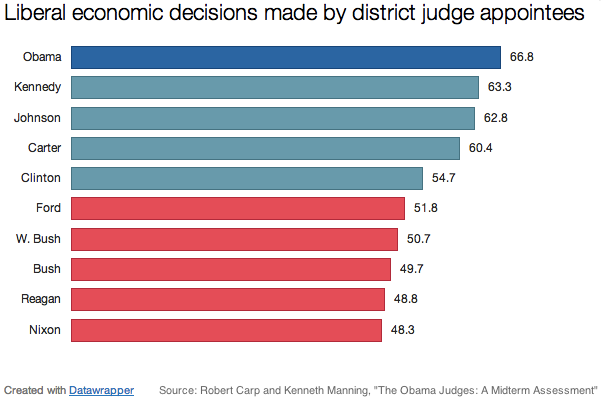 Note particularly the difference between Obama and Clinton's judges — Obama's made 66 percent liberal decisions, compared to 54 percent for Clinton's. (Throughout most of Clinton's presidency, he had to get his nominees confirmed by a Republican Senate, so it makes sense that they're somewhat less liberal.)

Carp and Manning code these opinions based on whether the judges sided with businesses. "In the area of government regulation of the economy, liberal judges would probably uphold legislation that benefited working people or the underdog," they write. "A typical case might be a dispute between a labor union and a company — a worker alleging a violation of the Fair Labor Standards Act, or a petitioner challenging the right of a government regulator to circumscribe his activity."

The authors admit they're not sure why Obama's judges are more liberal on economics. They speculate that it could have something to do with the aftermath of the financial crisis. But they write, "These numbers must be reckoned as countering suggestions by the political left Obama may be too cozy with wealthy business interests. He may or may not be, but at this point, his judges clearly are not."