Share All sharing options for: Are rich women really not marriage material?

Phyllis Schlafly is back, with another op-ed that seems designed to inspire the Jezebels of the world to respond with indignant rage.

In an op-ed for the Christian Post, the lawyer and conservative activist makes two key arguments: A) the commonly cited wage gap figure, that women make 77 cents for every dollar men make, is incorrect. And B) as a result, broadening the wage gap and boosting men's pay may in fact be good for everyone, men and women alike. The phenomenon of higher-earning women, she adds, has made everyone marry later and less.

Many have dismissed Schlafly's argument outright, but it's important to look at the facts behind it. She doesn't cite any studies and only gives a few (unsourced) statistics, so Vox went digging on a few of her key claims. And on some of those, the data do support her. But it depends heavily on how you look at it (and it also, as a fair warning, requires taking a heteronormative point of view). Here are three things she says:

schlafly argues that widening the wage gap may in fact be good for everyone, men and women alike.

Schlafly is here making the argument that Republicans tend to make against the claim that women make 77 cents for every dollar that men make. This is the figure the Obama Administration cites in its arguments for the Paycheck Fairness Act, and what it means is that full-time, year-round working women earned roughly 77 percent of what men did over the course of 2013.

Schlafly says this figure "is not based on equal work," and she's right. Numerous studies have attempted to control for factors that feed into this gap — hours worked, taking breaks for childbearing — and have come up with a much smaller gap. For example, the a 2009 study prepared for the Labor Department found an adjusted gap of roughly 5 to 7 percent. Another 2012 study found that recent college graduates had a 6.6 percent wage gap when adjusting for factors like field of study and occupation.

She's framing this in a very particular way (do men prefer to HAVE a lower-earning partner? Do women really prefer to BE the lower-earning partner?), but the fact is there's science to back this up. A 2013 study found that marriage rates decline in a marriage market where women grow more likely to earn more than men. In addition, the study found couples in which women make more than the men are more likely to divorce than those for whom the reverse is true.

This doesn't exactly say that women stated a preference for richer men, nor that men said they preferred poorer women. But it does suggest that marriages are less likely to happen (and stick) when women earn more.

3. In populations with smaller gender wage gaps, the marriage rate is going down.

Millennials are one group that Schlafly points to here, and they are a prime example of lower marriage rates and higher pay. It's true that Millennials are far less likely to be married at ages 18 to 32 than older cohorts, as the Pew Research Center reported in March. 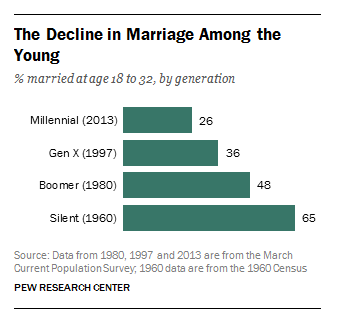 And among young women, the wage gap is also smaller than it is for all women together, as Pew also found in December. 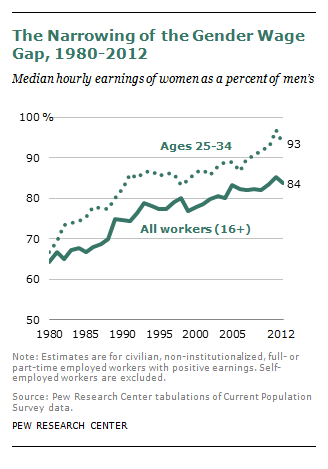 Schlafly gets these two phenomena right, though she then draws the conclusion — much more difficult to prove — that one causes the other.

So there's data to back up many of Schlafly's points, but there's also plenty of evidence to refute her arguments.

If you insist on controlling for all sorts of factors, then you are left with a much smaller gender wage gap. But to insist on those controls is to insist on removing factors in which unfairness manifests itself, as Vox's Matt Yglesias wrote last week.

2a. Men prefer to earn more than their wives...for now.

schlafly frames the preponderance of men breadwinners as the natural order of things.

While Schlafly frames the dominance of men breadwinners as the natural order of things — the sky is blue, the grass is green, high-earning women are repulsive potential spouses — the data suggest that this isn't as ingrained a preference as she says.

While women are the main breadwinners in only around 29 percent of married couples in which both spouses work, the share of couples in which the woman earns more has grown over time, according to Labor Department data. It's hard to imagine that all of those new couples are begrudgingly saying "I do." 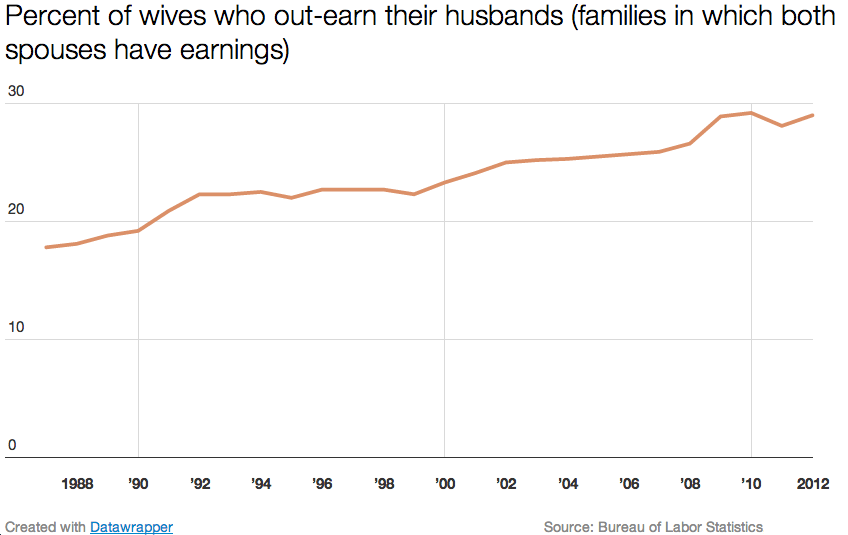 If the pay gap were magically eliminated, Schlafly says, "simple arithmetic suggests that half of women would be unable to find what they regard as a suitable mate." But humans clearly have the capacity to change their attitudes.

If it is indeed true that women "prefer" higher-earning men (and vice versa), it may be that we've all grown accustomed to this state of affairs; men aren't used to considering higher-earning women as marriage material simply because there aren't that many higher-earning women to pick from. And if that's true, that may mean society has conditioned men to act against their own economic best interests: you could argue it makes sense for a woman to want to boost her household income by as much as possible by marrying up. Why would men decide to marry less money than more money?

The authors of the NBER study themselves don't appear to believe they've found an innate desire for a particular spousal earning level. Rather, they frame their study in terms of gender constructs: "gender identity norms, and in particular the norm that 'a man should earn more than his wife,' impact a wide range of social and economic outcomes," they write in their conclusion.

2b. Women choose to have children, which happens to mean less money.

Because all you hear these days is women being really happy about the motherhood penalty. Chicks love that.

OK, but seriously. Motherhood can decrease women's wages significantly, as many studies have shown. One 2007 study, in fact, found that participants evaluated mothers as less competent and committed than their childless peers. Women may choose to have kids, but it's hard to imagine women choosing to be taken less seriously.

Are more working women dragging down the marriage rate? That's tougher to parse out. There is an economic argument that this might be true: a woman who can earn more money on her own may well see less need to start a household with a man. But that's at best a theory.