Could you pass the new SAT? Try these 4 sample questions

Share All sharing options for: Could you pass the new SAT? Try these 4 sample questions

Students taking the SAT in 2016 will spend more time reading and backing up their answers with evidence. They'll use math they learned in the classroom. And they won't have to study flash cards for the obscure vocabulary words long seen as crucial to success on the college entrance exam.

The College Board announced an overhaul of the SAT along these lines in March. Today, the organization released some sample questions. These questions might not actually be on the test — they're intended to be revised and studied over the next two years — but they give a clearer idea of what the test will actually look like come 2016.

The math questions will focus on three areas: linear equations, data analysis, and more complex systems and functions. (Other areas, such as geometry, will have a smaller role, making up at most 10 percent of the test.) The current version of the SAT focused on problem-solving questions students might not have encountered in the classroom. The new SAT hopes to align better with what students are learning at school.

Here's what a sample question on linear equations looks like. Answers are at the end: 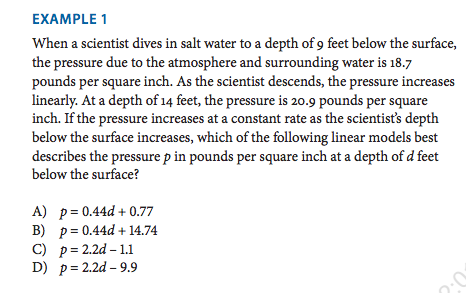 Here's another. Geometry will still be part of the new SAT: 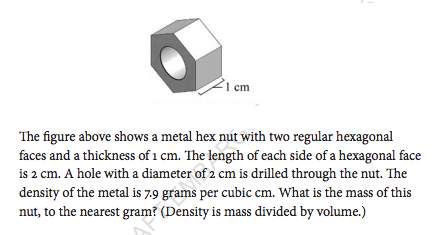 Know not just what, but why

Reading questions will sometimes ask test-takers to choose evidence from the passages to support their answers. The emphasis is on understanding and using evidence correctly — other questions will ask students to correct sentences that misinterpret charts.

Remember "SAT words?" They were polysyllabic, probably derived from Latin or Greek, and rarely used outside the exam. Those words are out on the new version of the test.

Vocabulary questions will focus instead on more commonly used words whose meanings change as they're used in different contexts. Here's an example from the sample questions. All of the multiple choice answers are valid definitions of the word "intense," but they're not all correct in context. 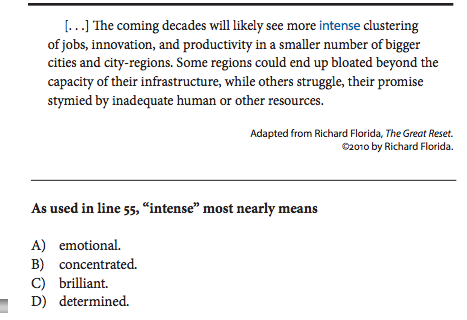 The old SAT already asked some questions like this, but they'll be more common on the new test.

Watch out for the Federalist Papers...

Or the US Constitution, the Bill of Rights, or other arguments about human dignity and freedom that build on the American founding documents. The SAT will now incorporate at least one of those texts in the reading section.

The sample question asks students to read Rep. Barbara Jordan's speech statement on the articles of impeachment against President Richard Nixon, which quotes from the Federalist Papers. (The passage also shows up in other sample questions about using evidence to support arguments.) Other possible sources include Edmund Burke, Gandhi, and Martin Luther King, Jr.

...and watch out for charts and graphs

Test-takers will have to interpret charts and graphs in both the reading and math sections. Here's a chart from the reading section's sample questions: 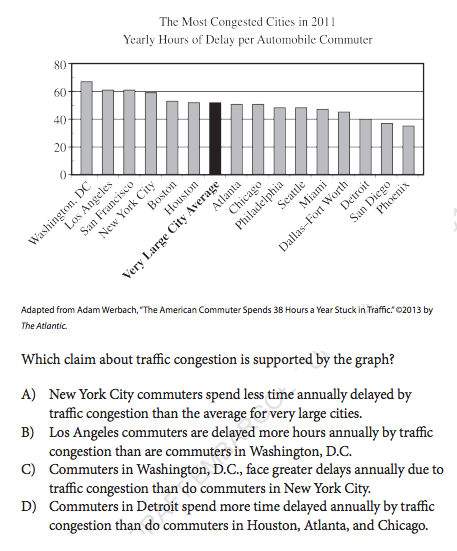 The test might be shorter (but is probably actually longer)

Technically, the new SAT is shorter, because the essay portion is now optional. But if students continue to write the essay anyway — and college admissions officers expect that most will — the new SAT is five minutes longer than the old version.

Students can go ahead and guess

The old SAT used to deduct a fraction of a point for wrong answers, but there was no penalty for leaving a question blank. The new SAT gets rid of that penalty, so it's scored more like standardized tests that students are used to.

And here are the answers