Share All sharing options for: This map of the world's most religiously diverse countries may surprise you

The world's most and least religiously diverse countries may not be quite what you think, judging by an extensive report by Pew, from April 2014, that scores and ranks countries on religious diversity by indexing survey data with a mathematical model. The results, to be honest, really surprised me.

Here's the data mapped out, with the most religiously diverse countries in blue and the least diverse in yellow:

But those are just a couple of the many, many interesting trends and datapoints in this data, all of which you can see on the map above and many of which shed a fascinating light on religion in the world today. What follows is a quick look a those trends.

A quick note on methodology: while every religion has internal sects and divisions, and while those can be very important, for the sake of workably comparing across countries and religions, Pew's data simply divides people into one of eight groups: Christian, Muslim, Hindu, Buddhist, Jewish, folk religion, other religion, and unaffiliated. That last category means that non-religious people count toward a country's religious diversity score.

The US is not as religiously diverse as you might think

It's a common refrain of conservative Christian Americans that "the US is a Christian country." And while they're legally and constitutionally wrong, the data shows that, demographically speaking, they're a little bit less wrong. That comes through in the US's metrics on religious diversity, which by Pew's measurement is lower than most Western European countries and 68th in the world overall. Here's a chart Pew put together comparing the US to France, which is more diverse, as well as to Singapore, the world's most religiously diverse country, and to Iran, one of the least diverse: 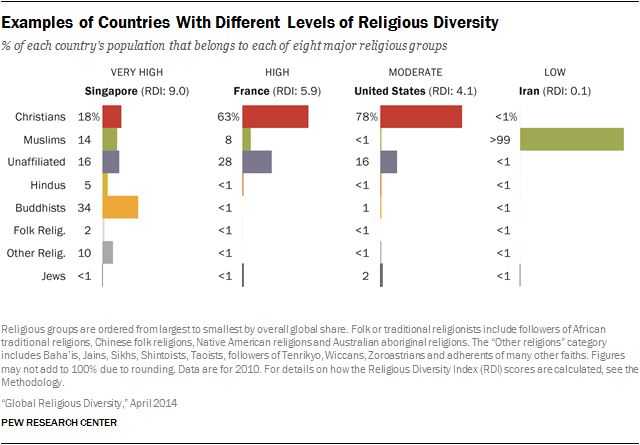 Maybe the most surprising thing here is that most of the US's religious diversity comes not from religious minorities, who in total are only 5.3 percent of the population, but from the 16 percent of Americans who are unaffiliated.

Part of that has to do with the fact that, for all of the US's racial diversity, many of those racial minority groups tend to be Christian: most African-Americans, certainly most Latinos, and a significant share of Asian-Americans.

Now compare the US to France and you'll see two things: that France has almost twice as many unaffiliateds as a share of population overall population, and eight times as many Muslims. This comparison also gets to a shortcoming in Pew's metric, though. Something this data does not show is intra-Christian diversity: the US has lots of different Christian groups, whereas French Christians are overwhelmingly Catholic. Diversity between Catholics and Protestants alone has been hugely important for US religious history.

East Asia is the world's most religiously diverse region

The diversity of faiths across much of East Asia is just astounding. You can see it in Singapore, for example, in the above chart. But Singapore is unusual: it's the size of a small city and has lots of first, second, third generation immigrants from China (many of them Buddhist or unaffiliated), Malaysia (many of them Muslim), India (Hindu), and Christians from the around southeast Asia and from Europe.

What's really interesting to look at is China, which Pew ranks at the ninth most religiously diverse country in the world. Though it's widely perceived as an atheistic country, given the avowed areligiosity of the Communist Party, it turns out to have hundreds of millions of faithful. Here's a chart of China's religious breakdown, alongside Taiwan, which is ranked second and was a part of China until 1949, and Hong Kong, which is ranked tenth and is a Chinese special autonomous region that spent 150 years under British rule. 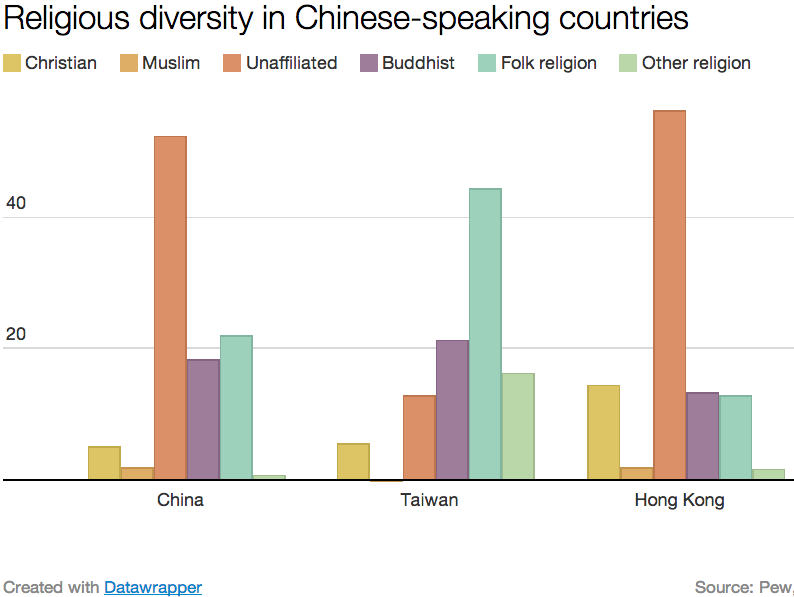 Yes, the largest group in China (and in Hong Kong) is of the unaffiliated, who are presumably mostly faithless as designed by Communist Party rule. China also turns out to have just massive populations of Buddhists and folk religionists. Christianity is far from freely practiced — it's tightly controlled by the government, which fears it as a possible threat — but it is still popular, with about five percent of Chinese professing to be Christian. Another 1.8 percent are Muslim, which may not sound like much, but that comes out to 23 million people — more Muslims that live in some Middle Eastern countries.

You see somewhat similar trends in Taiwan and Hong Kong: lots of unaffiliated, lots of Buddhists, lots of folk religionists. Taiwan also has a huge Daoist population, which shows up here as "other religions." And Hong Kong, owing to British rule and immigration, has lots of Christians. Keep this chart in mind the next time you hear someone describe China as "an atheist country." It's far from it.

Africa has lots of diversity along the Christian-Muslim divide 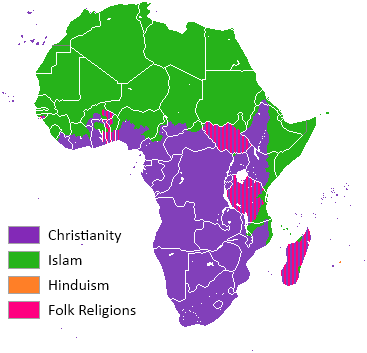 There's a wonderful book by the journalist Eliza Griswold called "The Tenth Parallel," which investigates the latitude line that just happens to run along a part of Africa that is roughly divided between Muslims to the north and Christians to the south. Of course it's more complicated than that — much of Africa's eastern coast is also Muslim — but the point is that a lot African countries overlap with Christian-Muslim divides and this creates heavy religious diversity. You can see that in the map at right.

So, unlike East Asian countries that score as diverse because people are spread out across several religions, in Africa that high diversity score often reflects a proximate and sometimes even divide between Christians and Muslims.

These divides have been a source of some conflict, particularly in West Africa. In Ivory Coast, for example, the heavily Christian south and the heavily Muslim north are also divided between political parties. That sense of division contributed to a civil war that began in 2002, ended in 2007, restarted in 2010 and "ended" the next year with an international intervention.

The Middle East is extremely homogenous — with key exceptions

A large number of the world's least religiously diverse countries are in the Middle East and North Africa. (Also near the bottom of the religious diversity list are a few heavily Catholic countries, such as Poland and Mexico.) These countries tend to be, no surprise, overwhelmingly Muslim. As in 99 percent Muslim or above.

But there are three interesting and very important exceptions, all of them bunched up together in a part of the Middle East geographically described as the Levant: Israel, Lebanon, and Syria. Here's the breakdown: 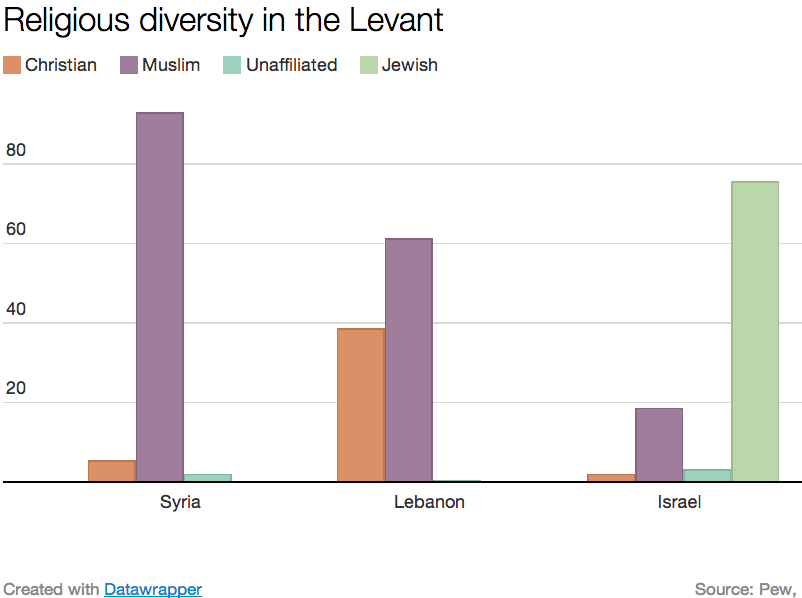 For the Middle East, this is really diverse. (And there's a second, extremely important layer of diversity not shown here: the Sunni-Shia divide within Islam.) In all three cases, that religious diversity has played a major role in some of the Middle East's worst conflicts.

The religious diversity within Syria, as un-diverse as it may look, is a significant part of the Syrian civil war. Roughly speaking, the war that began as about internal politics has become in some ways a religious proxy war between Sunni and Shia — with Christian groups forced alongside the Shia minority that currently holds power. In Lebanon, which has a large Christian population and no majority group, the country's politics fractured along religious lines in the 1970s, which led to a 15-year civil war that devastated the country; its politics remain divided by religion today. Israel, of course, is highly complicated in its own way: founded as a Jewish state on top of land that had belonged to mostly Muslims and some Christians, it's been mired for decades in an Israel-Palestine conflict that is in some ways about reconciling Jews and Muslims.

There's another surprising piece of data in the Middle East: Saudi Arabia is surprisingly diverse. That's only by the low bar of the Middle East — it's about as diverse as Ireland or Thailand — but it's interesting given the country's theocratic Islamic government and its well-earned image as an ultra-conservative Islamic state. Only 7 percent of Saudis are non-Muslim, but that's not nothing. They're divided between Christians, who have ancient roots here, and the Hindus and Buddhists who are mostly migrant workers.