Sheila Dewan of the New York Times partnered up with the real estate site Zillow to do an important calculation and found that there are ninety cities in America where median rents exceed 30 percent of median income. In other words, the country has a huge housing affordability problem.

Unfortunately, the policy analysis that resulted left something to be desired:

But demand has shown no signs of slackening. And as long as there are plenty of upper-income renters looking for apartments, there is little incentive to build anything other than expensive units. As a result, there are in effect two separate rental markets that are so far apart in price that they have little impact on each other. In one extreme case, a glut of new luxury apartments in Washington has pushed high-end rents down, even while midrange rents have continued to rise.

"Increasing the supply is not going to increase the number of affordable units; that is a complete and utter fallacy," said Jaimie Ross, the president of the Florida Housing Coalition. "People say if there really was a great need, the market would provide it; the market would correct itself. Well, the market has never corrected itself and it's only getting worse."

The problem with this kind of skepticism of the value of luxury development is that it forgets to consider the counterfactual. If there had been no new expensive real estate projects in Washington, DC over the past ten years it's not as if the rich people who live in them would vanish. Some of them would be bidding up the price of other units elsewhere in the city, and some of them would be living in some other city bidding up the rents there.

Either way, the basic math of affordability is that you have so many people and so many housing units and when the number of people exceeds the number of units the poor end up losing out. Conversely when you increase the number of units — even if the new units are very expensive — you're making some kind of progress. 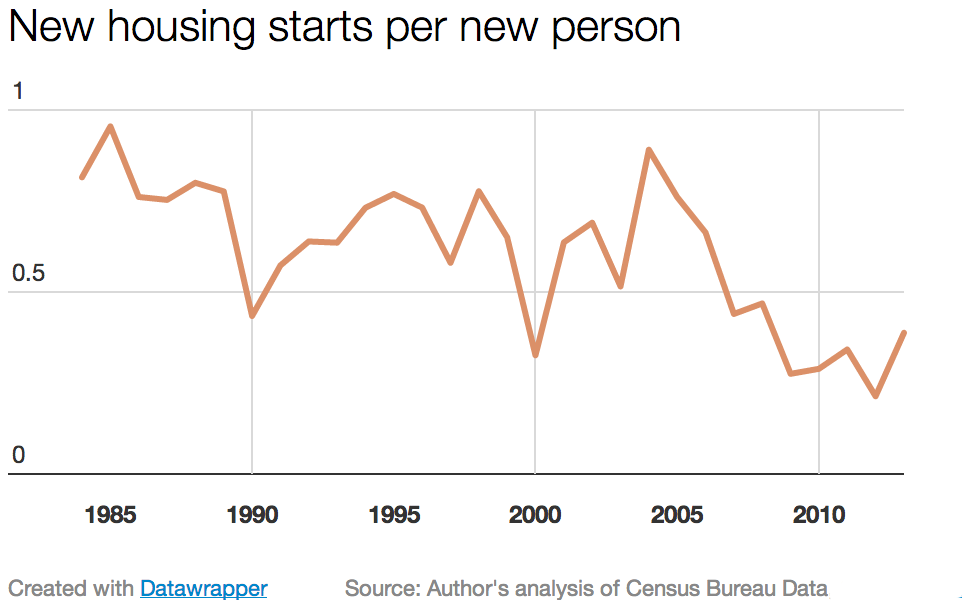 As you can see in the chart above, the real story about construction's role in the affordability crisis is simpler and more boring — the mid-aughts construction boom was a long time ago, and since then the construction of new housing hasn't kept up with the growth in the country's population. More people without more units equals scarcity and high prices.