Here's why your student loans are about to get more expensive

Share All sharing options for: Here's why your student loans are about to get more expensive

Bad news for college students: new federal student loans are getting more expensive.
The Congressional Budget Office estimated Monday that undergraduate student loans issued this fall will have an interest rate of 5.04 percent, up from 3.86 percent for 2013-14.

And the interest rate increases don't stop here. The CBO projects student loans are going to get more expensive every year until at least 2018.
The Consumer Financial Protection Bureau did the math and found next year's interest rate increase will add $3 in monthly payments for every $5,000 borrowed in undergraduate loans.
That's not much on a monthly basis. But the average student who graduated with a bachelor's degree in 2012 and took out loans had $29,400 in debt. Annual interest rate increases could add thousands of dollars to that sum by the time a student graduates after four (or five, or six) years.
Why the increases? Last summer, Congress passed a law tying the interest rate on newly issued student loans to the rate on 10-year Treasury bonds.
The CBO said Monday that those rates are headed in only one direction: up. That's a good sign for the economy. But it's not so great for students, who the CBO projects will be paying interest rates of around 7 percent on undergraduate loans by 2018: 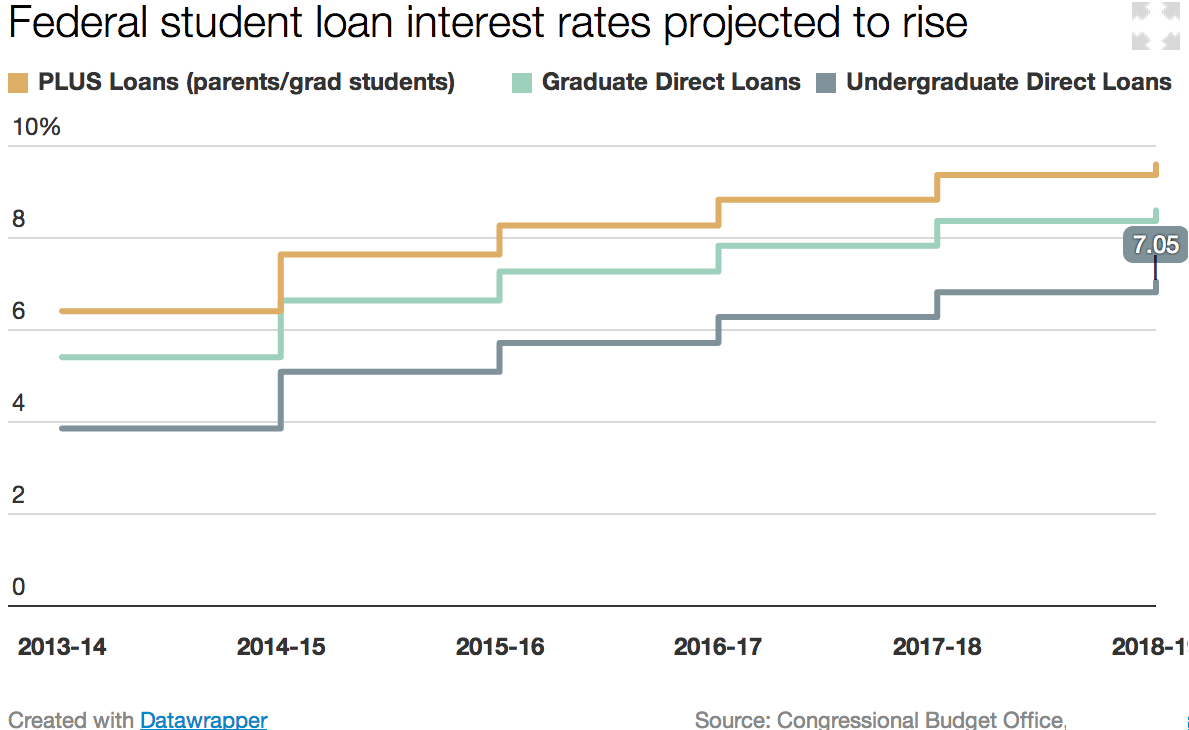 These are still just estimates — rates are finalized after a bond auction this spring. Federal student loan rates are fixed over the life of the loan, so students who borrowed at low rates this year will keep the low rates (and borrowers who took out loans at higher interest rates a few years ago don't get a break).
In the past, the prospect of climbing student loan interest rates led to a political uproar. But it's not clear if that will happen this time around.
In 2012, legislation from 2007 that set low, fixed student loan interest rates was expiring, and the rates on some undergraduate loans would have doubled from 3.4 percent to 6.8 percent.
But Democrats and student advocates pushed back hard with a campaign called "Don't Double My Rate," and President Obama, then on the campaign trail, joined in. Obama even "slow jammed the news" on Jimmy Fallon on student loan interest rates, and Congress gave the low rate a one-year extension.
In summer 2013, as the one-year extension expired, President Obama joined Congressional Republicans to call for a new way of setting interest rates that was more sensitive to market conditions. The result was a law tying interest rates for new loans to the 10-year Treasury note.
The law was passed over objections from more liberal Senate Democrats and some student advocates, who revived the "Don't Double My Rate" campaign.
And sure enough, rates will eventually double from 3.4 percent after all. It's just happening a little more slowly than it would have otherwise. Interest rates on undergraduate loans will pass the 6.8 percent mark in 2017.
There's plenty of time between now and then for Congress to change the law again. The Higher Education Act is up for renewal at the end of this year. But according to the federal government's accounting, the Education Department makes money on student loans — and lowering the interest rates means that, at the very least, they'll make a little less. That might be a tough sell in budget-conscious times.