Nicolas Cage has a new movie out — Joe, directed by Southern gothic art film/stoner comedy auteur David Gordon Green — and it's kind of…good? Metacritic gives it an average rating of 72 by critics so far, and Rotten Tomatoes found 83 percent of critics gave it a positive review. It's enough for some observers to be debating if it's the start of a new, more artistically fruitful period in Cage's career, like the one Matthew McConaughey has been experiencing in recent years.

But are the reviews Cage usually gets really that bad? Just how far does he have to go to get to where, say, McConaughey is (average Rotten Tomatoes score, last five movies: 76.8)?

Pretty far, actually. I pulled reviews for every movie Cage has starred in from Metacritic and Rotten Tomatoes, running from Valley Girl in 1983 to Joe. The data's noisy; December 2002 saw the release of both Adaptation (Metacritic score: 83) and Sonny (31), so just plotting every review doesn't get you anywhere. To smooth things out, I calculated an average score for his five most recent movies throughout his career. For example, his current average scores (51 on Rotten Tomatoes, 49 on Metacritic) come from Joe, The Frozen Ground, The Croods, Stolen, and Seeking Justice. Here's what that looks like over the three decades he's been active: 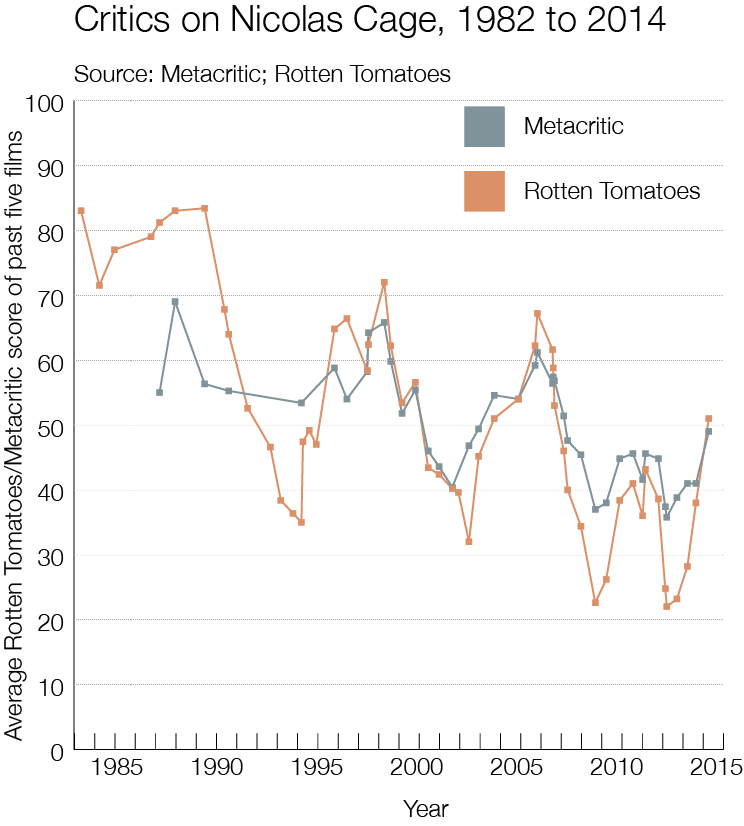 While there are periodic upswings and downswings, overall Cage has been on a steady downward trajectory since the start of his career. It's true that — both due to Joe and to his voiceover work in The Croods — Cage is currently on an upward run. Both of his score averages are at their highest point since the release of Drive Angry 3D three years ago. But "best reviews in three years" doesn't exactly constitute a professional rebirth.

It's worth noting, also, just how sensitive these numbers are to big critical hits. The drop-off after Drive Angry happened not just because his next movie, Trespass, was terribly reviewed, but because his last critically acclaimed movie, Bad Lieutenant: Port of Call New Orleans, fell out of the averaging window. And he doesn't get critical hits like that very often. In the '00s, he only had three movies (Bad Lieutenant, Adaptation, Matchstick Men) top 80 on Rotten Tomatoes, and only one of those (Adaptation) topped 90. By contrast, seven movies of his movies that decade fell below 30, a really impressive level of critical loathing.

In any case, his track record doesn't look like McConaughey's at all: 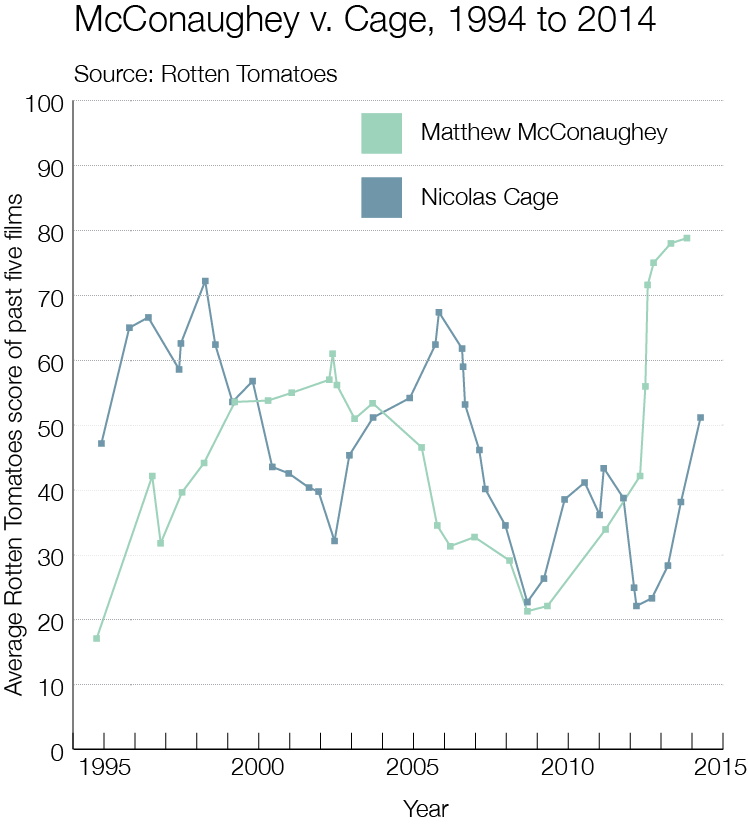 McConaughey had a smooth rise in the late '90s and early '00s, fueled by solidly reviewed movies like U-571, Frailty, and Thirteen Conversations About One Thing, and then a smooth decline due to the likes of Fool's Gold and Sahara, and then a dramatic upswing with The Lincoln Lawyer, Bernie, Magic Mike, Killer Joe, Mud, and Dallas Buyers Club. The horribly reviewed The Paperboy, best known as the movie where Nicole Kidman pees on Zac Efron, snuck in between Killer Joe and Mud, but even that couldn't reverse the trend.

Cage's career, by contrast, is a flat circle. Upswings give rise to declines give rise to upswings, all in a repeating, cyclical pattern.

As mutual funds always tell you, past performance is no guarantee of future results. For all we know, Cage is only doing movies with Kathryn Bigelow, PT Anderson, and Steve McQueen from hereon out, they're all going to be great, and he'll average a perfect 100 on Rotten Tomatoes forevermore. But one good movie every five years or so is totally normal for him, and predicting a turnaround based on Joe is just silly.