CHART: Money isn’t the only way the rich dominate politics

Share All sharing options for: CHART: Money isn’t the only way the rich dominate politics

It's easy to think of the Doom Loop of Oligarchy as driven by political spending. But it's also driven, more mundanely, by political engagement. The more affluent you are, the more likely you are to do, well, anything related to American politics. That includes the most basic political act of all: 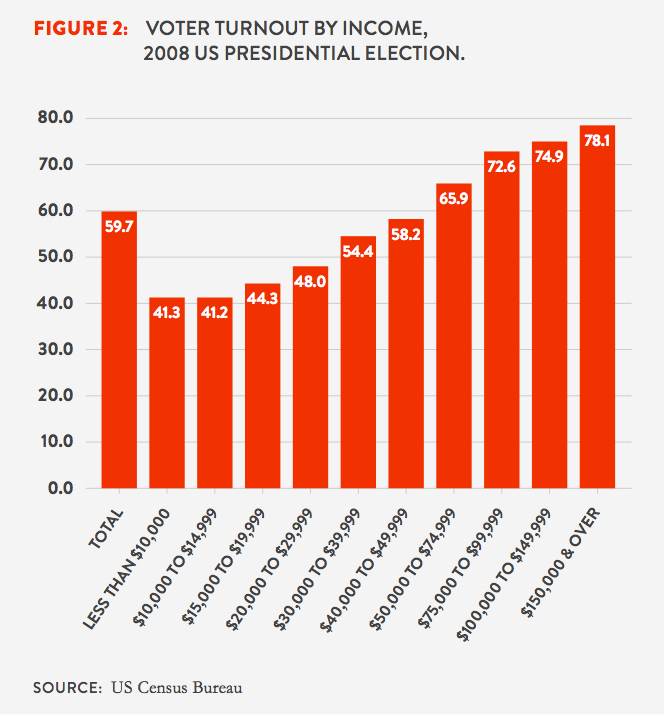 The graph comes from a recent report the think tank Demos did on political inequality. As they note, the gap can be even larger in midterm elections.

A graph like this, of course, tells us more about broad swaths of the American public than about the super rich. But as Demos notes, the political opinions of people making $100,000 or more are still noticeably different from the opinions of those making $30,000 or less. For instance, "A September 2012 survey by the Economist magazine found that respondents making over $100,000 annually were twice as likely to name the budget deficit as the most important issue in deciding how they would vote than middle or lower income respondents."

The Doom Loop of Oligarchy isn't just driven by super-rich Americans spending huge sums to influence politics. It's also driven by working-class Americans disengaging from the political process, which leaves politicians more desperate for the votes and the contributions of the affluent.