Why Passover is such a big deal for American Jews, in one chart

Share All sharing options for: Why Passover is such a big deal for American Jews, in one chart

Passover, which begins tonight at sundown, is not the most important holiday in Judaism, religiously speaking. That would probably be Yom Kippur, the last of the High Holy Days, which tends to fall in September or October. But, in the US at least, it's often Passover that gets the most attention.

This chart, from data gathered by Pew Research in a 2013 report on what religious practices US Jews observe, really drives home how big of a deal Passover is becoming culturally, if not theologically: 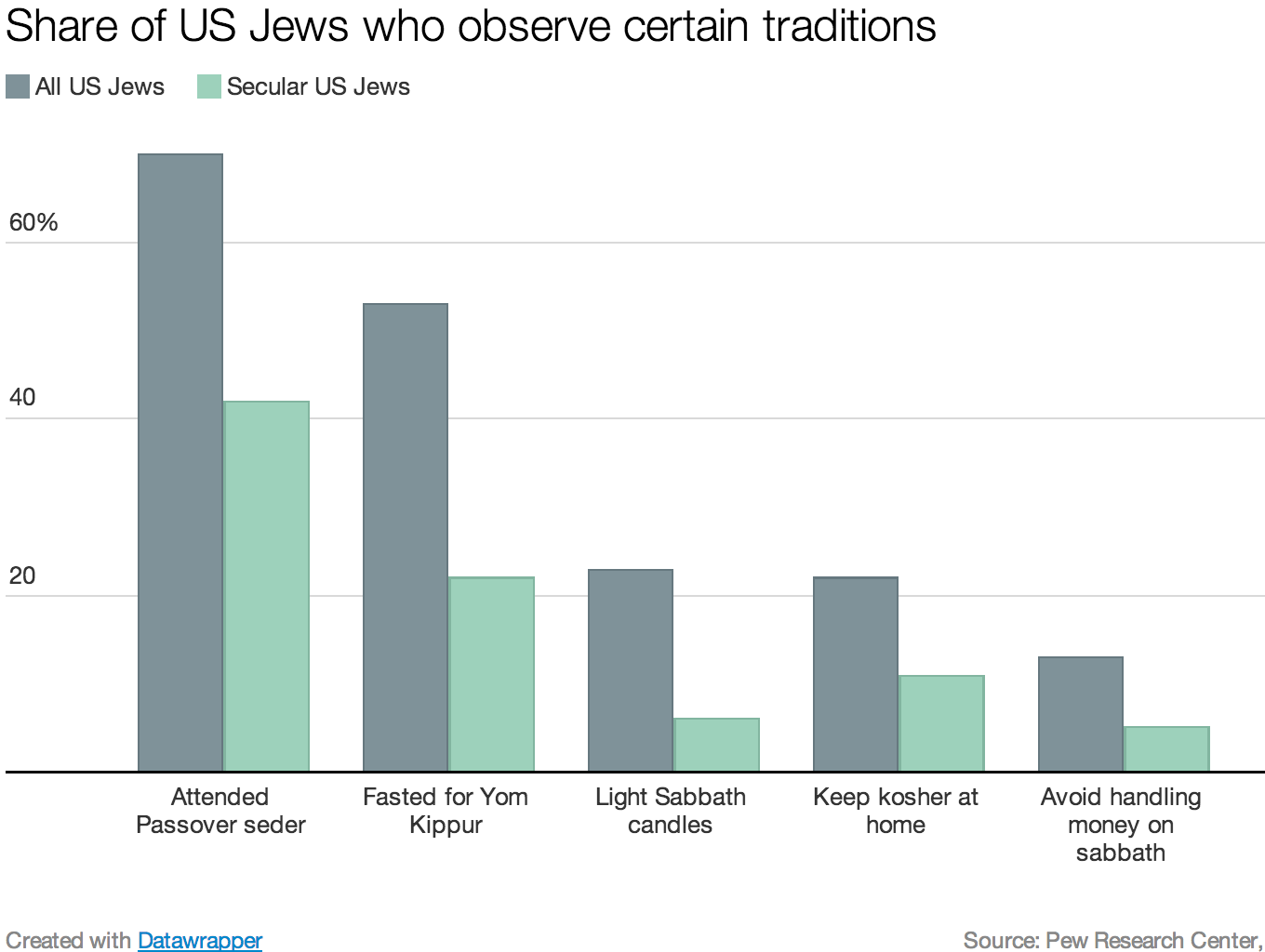 You can see that Passover doesn't just get the most attention from US Jews in general, but from secular Jews as well, almost half of whom observe the holiday.

Passover, which commemorates the ancient Jews' Biblical flight from Egypt to Israel, is celebrated by nearly three out of four US Jews, and 42 percent of secular Jews. If you live in a place with a significant Jewish population, there's a pretty good chance you know someone who's going to a seder — the ritual-heavy dinner that marks Passover — or are going yourself. Among religiously observant Jews, 78 percent attend a seder.

In other words, a secular Jew is about twice as likely to attend a Passover seder as he or she is to fast during Yom Kippur, even though the latter is by far the more important holiday. About 22 percent of US Jews report themselves as secular, so the fact that they are so much more likely to observe Passover is a big deal for its cultural prominence.

This trend holds for the two largest sects of observant Jews: Reform Jews and Jews with no official denomination, who together make up 65 percent of observant Jews and tend to be more liberal in their practices. Among Reform Jews, 76 percent go to a Passover seder but only 56 percent say they fasted for Yom Kippur; among Jews with no denomination, it's 47 and 25 percent, respectively.

In practice, Passover is just more widely practiced. That doesn't make it more important, but it certainly does give the holiday more prominence.

It's not totally clear why US Jews seem so much fonder of Passover seders than of fasting for Yom Kippur, but it's hard to escape the fact that eating a big meal with your family and friends is a lot more enjoyable than fasting. Passover is celebrated entirely at home, so if you're secular or rarely attend a synagogue then you're probably more willing to do it. It's a religious practice that, if you don't spend a lot of time practicing religion, can feel more comfortable.

Given the high rates of secularism among US Jews, and the prominence of more-liberal denominations, it's hardly surprising that Passover would come to play such a significant role. For Jews who might feel more connection to the shared cultural heritage of Judaism than to the religious doctrine, a holiday that so emphasizes bonding with loved ones over a meal at home has obvious attractions.