Sorry, Pew — America is in a class war, not a generational war

Share All sharing options for: Sorry, Pew — America is in a class war, not a generational war

The Pew Center has a genuinely amazing set of interactive charts and graphs up on America's shifting demographics. It's just fantastic work. But if you manage to tear yourself away from the data visualizations, you'll see some slightly odd editorializing in the text.

"At a time when young and old don't look alike, think alike or vote alike, how will America modernize its entitlement programs so they're in sync with its new demographics?" they ask.

Another section strongly implies that Social Security cuts are needed: "we'll have just two workers per beneficiary — down from three-to-one now, five-to-one in 1960 and more than forty-to-one in 1945, shortly after Social Security first started supporting beneficiaries" so today's people "have no realistic chance of receiving [full Social Security benefits] when they become old."

The striking thing is that Pew's data is so good that it thoroughly debunks this portrait of a country riven by generational conflict. It is true that younger Americans and older Americans have very different political views, but few people perceive American politics as driven by age-related conflicts: 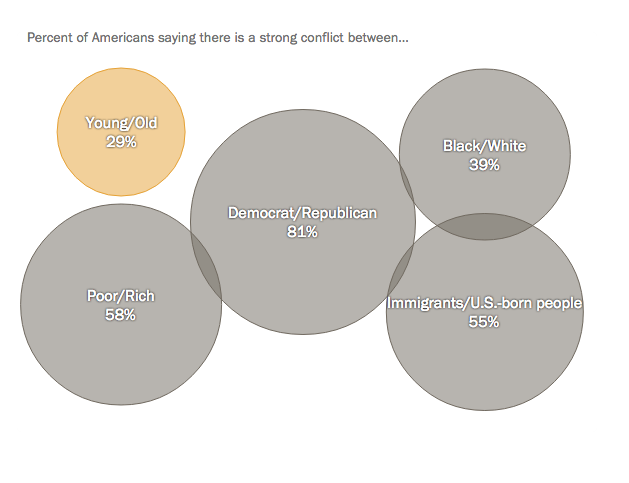 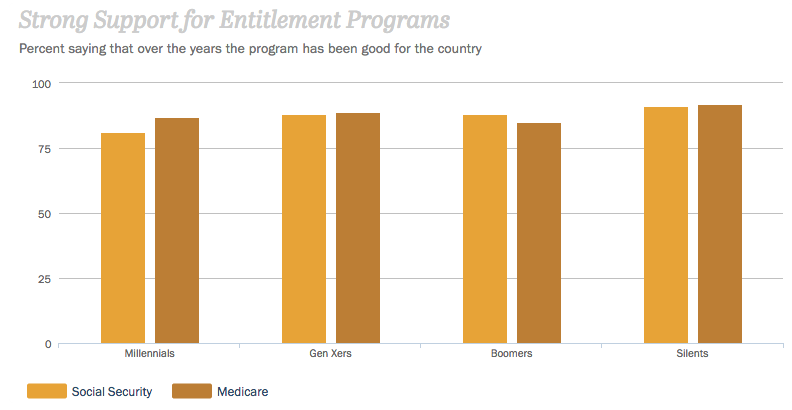 That, again, is not to deny that the young and the old have different political opinions. As Pew writes, the youngest cohort "hold liberal attitudes on most social and governmental issues, as well as America's approach to foreign policy" and in particular millennials "are strong supporters of a more activist government."

All of which is to say that the generation gap in American politics isn't about age per se, and it certainly isn't about retirement programs. It's about class. Congress is sharply divided between a party that's obsessed with raising taxes on the rich and a party that's fanatically opposed to doing so. Young people largely back the Democrats on this, while old people largely back the GOP. But there simply isn't a scramble between young and old for resources.