It's not just Paris and Copenhagen: anti-Semitic violence is on the rise globally

Share All sharing options for: It's not just Paris and Copenhagen: anti-Semitic violence is on the rise globally

Over the weekend, a Danish man attacked a free speech event and a synagogue hosting a bat mitzvah in Copenhagen, killing two and wounding five before being shot by police. The parallels with the Charlie Hebdo attacks in Paris, which targeted cartoonists who had drawn Muhammed and later a kosher supermarket, are obvious and chilling.

These mass shooters are far from alone in targeting Jews. For the past two decades, anti-Semitic violence has been on the rise worldwide. It's nothing like the 1930s, but the combination of a slow economy and the Arab-Israeli conflict have contributed to a surge in one of the world's oldest hatreds.

Anti-Semitism is on the rise worldwide, though America is a happy exception 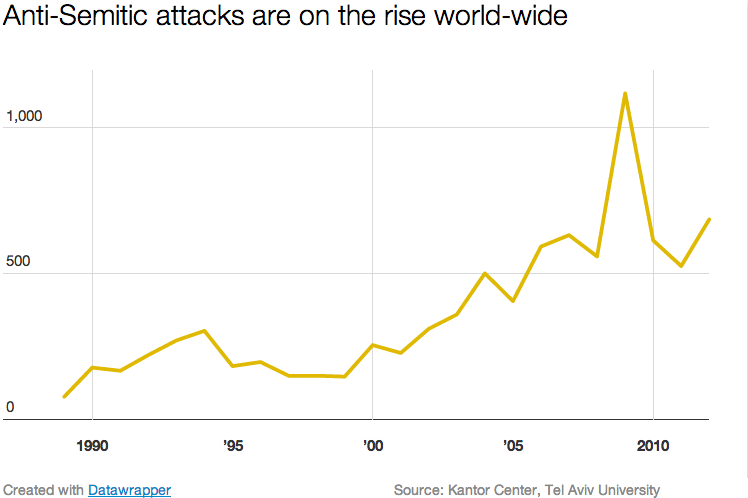 Most of the violence was, unsurprisingly, recorded in places with high Jewish populations. A little over a fifth of the attacks the Kantor Center recorded in 2013, the last year covered by the data, took place in France, which houses the world's third-largest Jewish population after Israel and the United States.

Europe also has large Muslim immigrant populations, many of whom are poor and socially isolated. This "globalization of populations," according to Ohio State sociologist William Brustein, explains the recent upsurge in European anti-Semitic violence.

According to Kantor, this is the reason behind the near-doubling in anti-Semitic activities spike in 2009. Israel's December 2008 incursion into Gaza infuriated Arab and Muslim populations, many of whom turned to anti-Semitic violence in anger. This led to "unprecedented anti-Jewish activity worldwide," in the Kantor researchers' words. We saw reports of a similar upswing in European anti-Semitism during the 2014 Gaza war, so when the Kantor Center data for last year is released, there will likely be another surge in anti-Semitic violence.

So it makes sense that the US, where Muslim and Jewish communities are on much better terms, is a clear exception to the general trend. The Anti-Defamation League, which maintains its own database of domestic anti-Semitic incidents, has found a clear decline in domestic anti-Semitism since a peak in 1994. 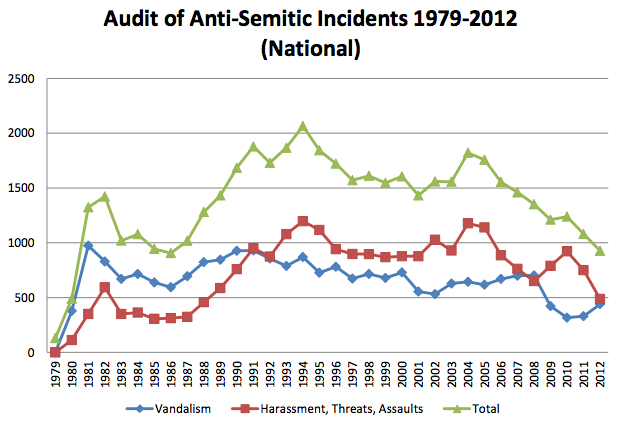 Put together, these two databases tell us several important things about the Paris and Copenhagen shootings.

One important factor explaining the difference in trends between the US and Europe is that anti-Semitism appears to grow on itself. After one anti-Semitic attack, others become more likely. Those in turn inspire their own copycats, creating a vicious spiral.

In 2012, four Jews were murdered at a synagogue in Toulouse, France by an Islamist gunman who also killed three French soldiers. According to the Kantor Center, this triggered a 58 percent rise in anti-Semitic incidents in France over 2011. "It was the most violent year in France since 2004," the Kantor researchers write, "and its impact was felt in other countries as well, notably the UK."

Danish security official Jens Madsen told reporters that they were investigating whether the Copenhagen attack was "inspired by the events in Paris." If so, the Toulouse precedent starts to look even more ominous.

Anti-Semitism is still the 'socialism of fools' 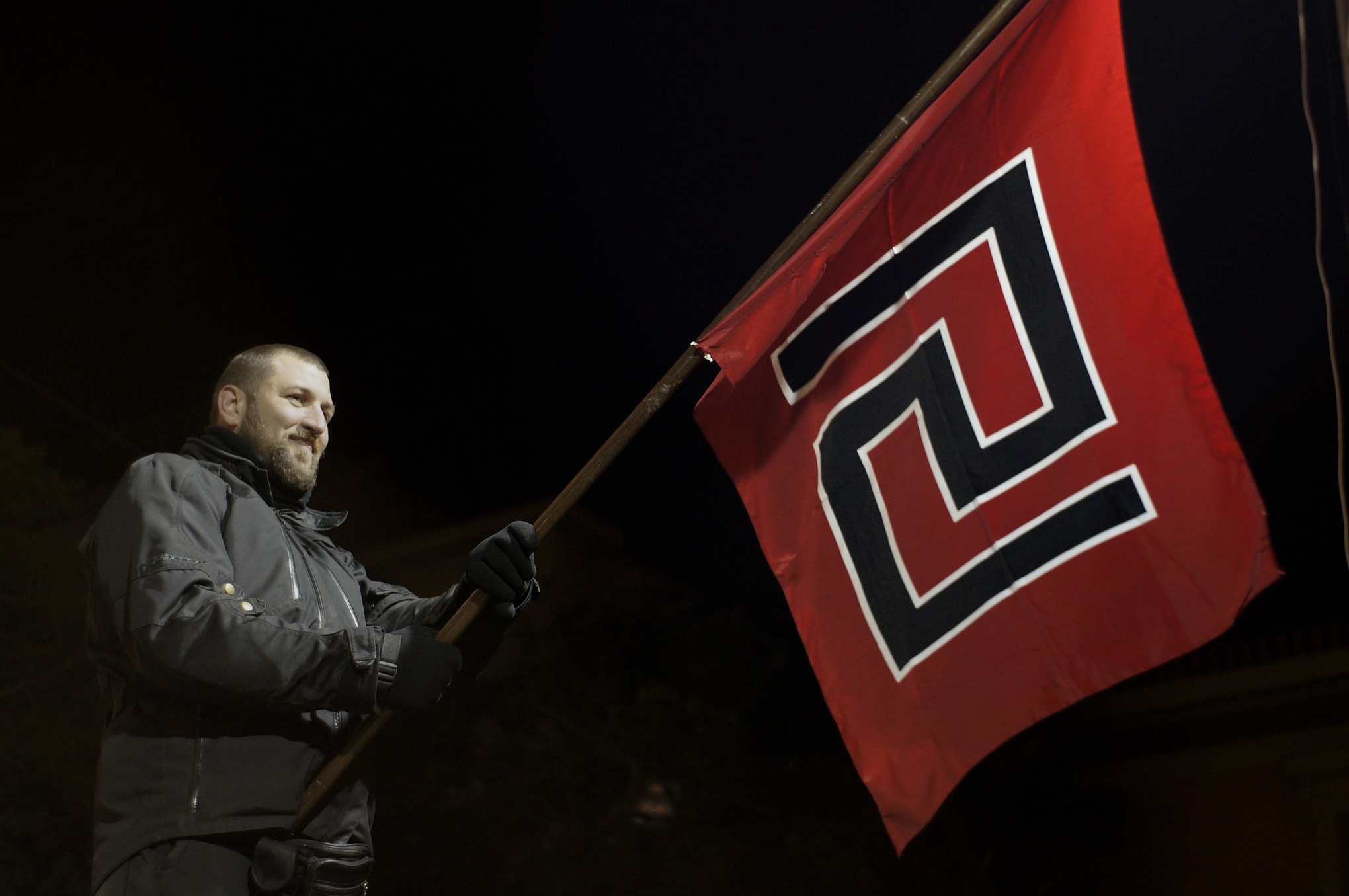 People responsible for anti-Semitic violence often argue that Jews are secretly pulling the strings of the global economy. As a consequence, there's a longstanding theory that anti-Semitism rises when the economy plummets, leading more people to blame the Jews. The 19th century German Marxist August Bebel memorably called this "the socialism of fools." It fuels both anti-Semitic attacks and, equally ominously, anti-Semitic political movements.

Indeed, Europe's economic maladies appear to be coinciding with a rise of anti-Semitic political groups. Greece's Golden Dawn, a neo-Nazi party, won 18 seats in Greece's parliament after its financial crisis. Hungary's Jobbik, another anti-Semitic hard-right party, won 20 percent of the vote in an election last April.

Anti-Semitism isn't going away, but it's nowhere near as powerful as it once was 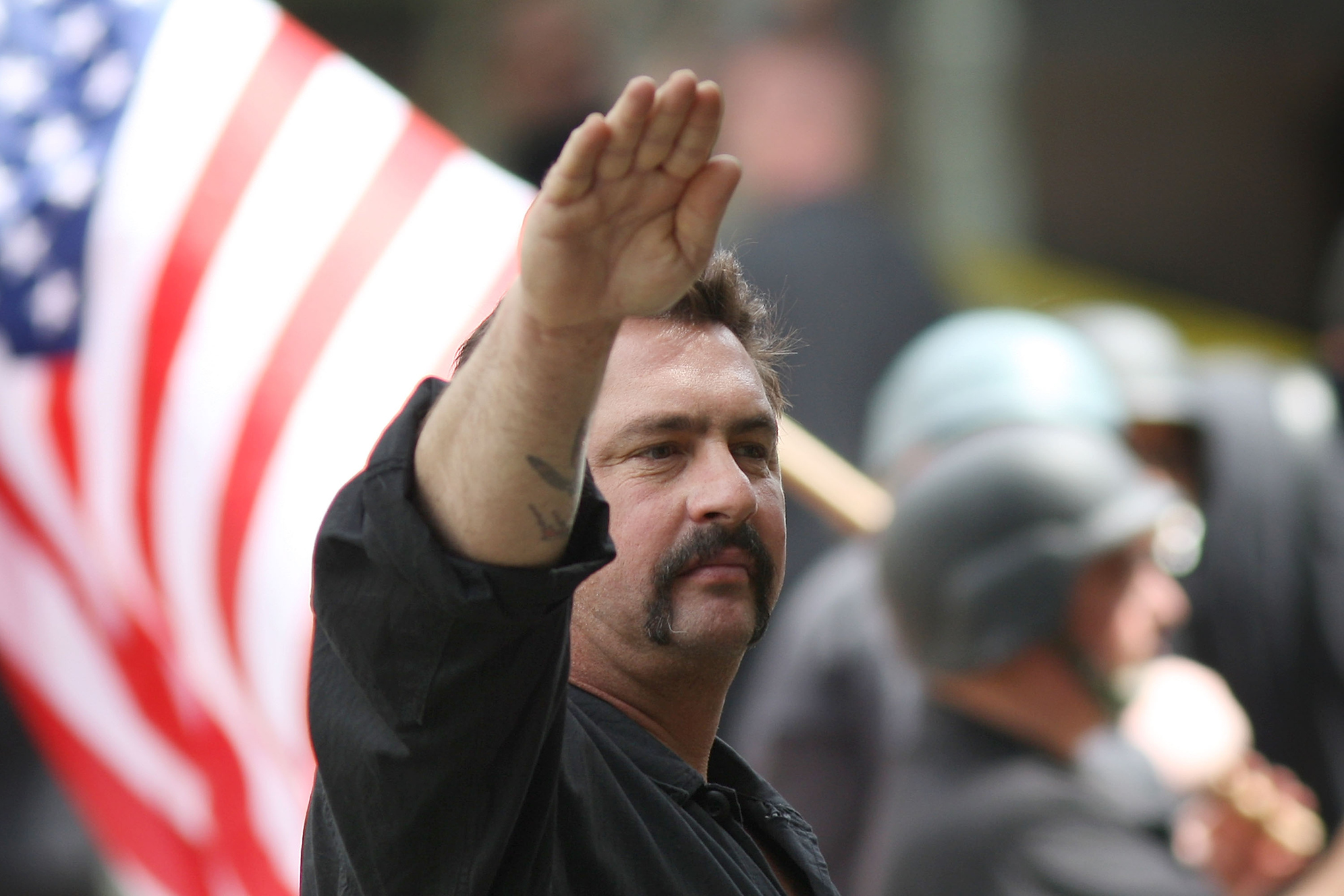 An American neo-Nazi does the Nazi salute at a rally in Los Angeles. David McNew/Getty Images

The clear increase in attacks against Jews worldwide suggests that anti-Semitism is not on the outs. While it's often assumed that anti-Semitic hate was discredited by the Holocaust, the evidence clearly suggests that's not the case. Anti-Semitism has made a comeback, particularly in the past decade. And the results, as we saw in Paris and Copenhagen, can be horrifying.

That being said, we're a long way from a new era of anti-Jewish persecution. According to Ohio State's Brustein, "The underlying roots and motivators [of anti-Semitism] have been eliminated or declined." Mainstream Christian doctrine is no longer anti-Semitic, fewer people believe anti-Semitic conspiracy theories, and Nazi-style racial hatred is no longer in power.

So, given the decline in the classical sources of anti-Semitism, Brustein doesn't "see what happened in the Overland Park area [a shooting that killed three at a Kansas City Jewish community center and retirement home in April 2014] as the beginnings of something bigger."

"It's always important to be vigilant," he says, "but let's keep the right perspective on all of this."

This piece was originally published in April 2014, after the Kansas City shooting. It's been updated to reflect recent events and new data.