Where your tax dollars go, in one chart

Share All sharing options for: Where your tax dollars go, in one chart

I was doing some last minute tax preparation over the weekend (and lamenting the facts in this video) and I probably wasn't the only one. Tax filing season is always a good opportunity to revisit this graphic from the Center on Budget and Policy Priorities that highlights what it is the federal government is spending your money on. 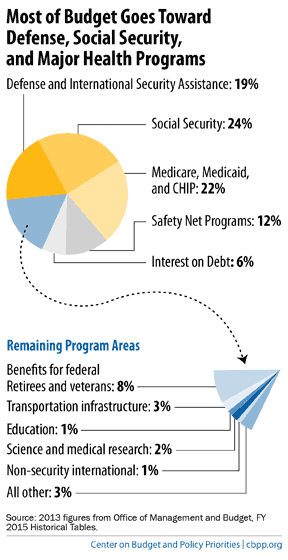 Even though the government runs a somewhat bewildering array of programs, you can see here that just a few of them combine to account for the bulk of the money.

These are the big program areas you would have to cut if you wanted to downside the federal government in a major way. As the saying goes, the government is an insurance company with an army — it takes care of the elderly and the sick, and it projects force abroad.

The important thing to know about this politically is that these big programs — and especially the two biggest, Social Security and the military — tend to be the least politically contentious. In practice we see a lot of very heated very ideological arguments that are mostly focused on a relatively small slice of the budget.

As a substantive matter, the striking thing about this budget breakdown is that education, scientific research, and infrastructure combine for remarkably modest 6 percent of the federal budget. That's our "investment in the future" portfolio and it's pretty meager.