This year, at least 100 people connected to the Archdiocese of Portland got a nasty surprise when they tried to file their taxes. Someone had already used their Social Security numbers to file fraudulent tax returns in order to steal their tax refunds.

These Portland-area Catholics are just a few of the hundreds of thousands of Americans every year whose identities are used for tax fraud. It's a lucrative crime because criminals can get thousands of dollars from a single fraudulent tax return. The problem has cost the government billions of dollars, and it can be a huge headache for the people whose identities are stolen.

Last year, the IRS had more than 3,000 employees working on the issue. The agency says it has stopped billions of dollars in fraudulent refunds in recent years. But tax-related identity theft is still a major problem, thanks in part to America's embarrassingly outdated system for handling income tax returns. A modern tax system would make it a lot easier for the IRS to prevent most identity thefts before they happen.

Criminals obtain fraudulent tax refunds by impersonating real taxpayers. They can obtain a taxpayer's name, Social Security, and other data by gaining unauthorized access to employment records, hospital records, and so forth.

They then use this information to file fraudulent tax returns claiming that the taxpayer is eligible for a tax refund and directing the cash to a bank account controlled by the criminal.

"Usually in the more sophisticated cases the tax returns are filed electronically," says Justin Gelfand, a St. Louis attorney who recently ended a stint at the Justice Department prosecuting tax-related identity theft cases. "If the tax return passes the IRS's filters, then the IRS will make a payment." In many cases, the money is deposited onto a pre-paid debit card. Less frequently, the criminal will ask for a paper check to be sent to a mailbox where the criminal has the opportunity to pick it up.

The scale of tax refund fraud schemes varies. "I prosecuted cases at the Justice Department where a single person perpetrated the scheme, and I prosecuted cases where ten to fifteen people were involved in one scheme," Gelfand says. Some schemes generated millions of dollars in a single tax-filing season.

What will happen if my identity is stolen?

If you discover that someone has filed a fraudulent return in your name — most likely after the IRS refuses to accept your own return — you can fill out an identity theft affidavit notifying the IRS to the problem.

After you convince the IRS that you are the legitimate taxpayer and not the fraudster, you should eventually get your refund. But getting things cleared up can be a huge hassle and require you to talk to multiple IRS departments. And it can take months. Gelfand says it's not uncommon for victims to wait six months to get their refunds. 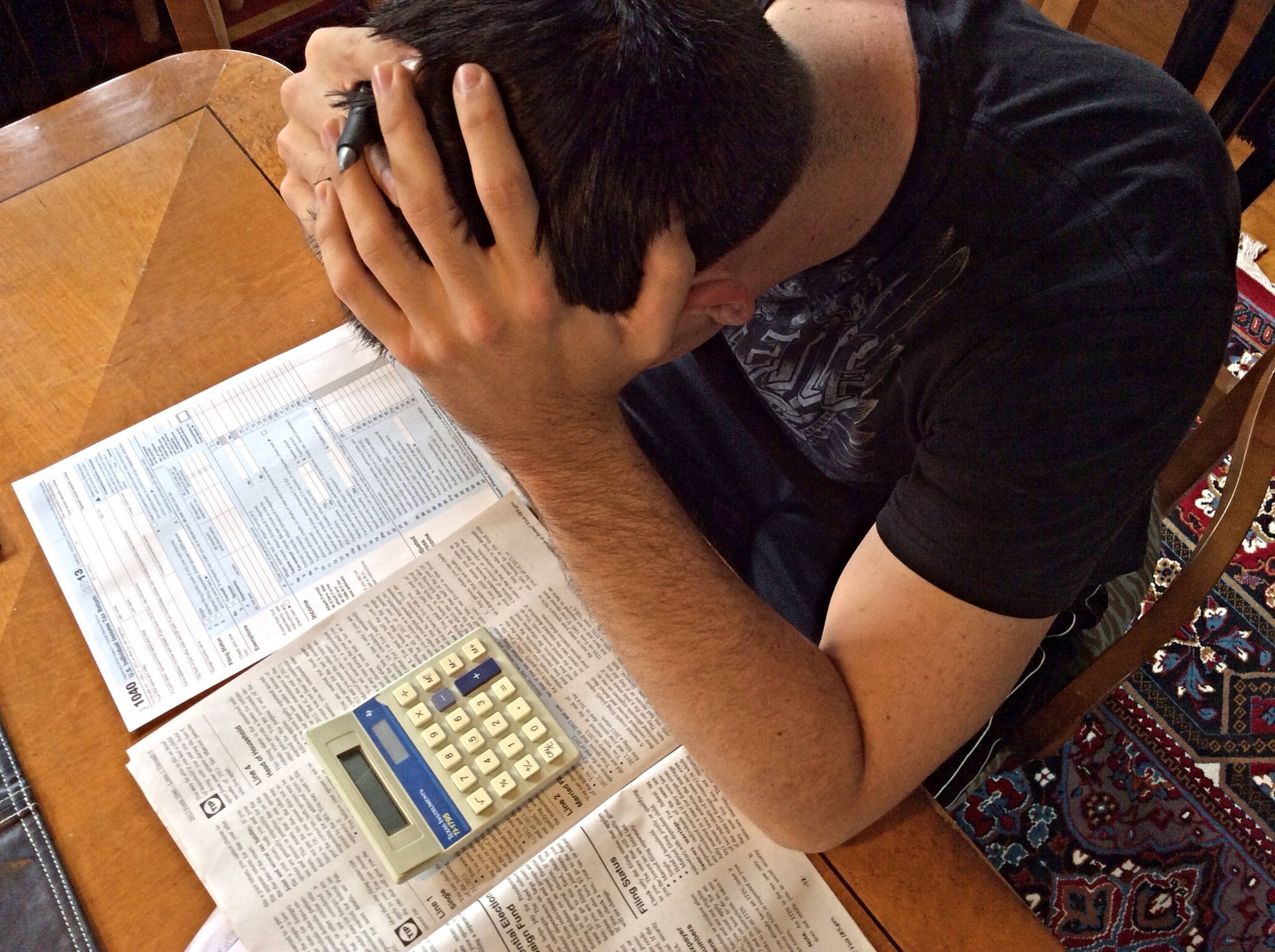 What is the IRS doing to combat the problem?

The IRS has been under a lot of pressure to crack down on identity theft and described its anti-fraud efforts in congressional testimony last year. The agency spent $328 million on the problem in its 2012 fiscal year, with more than 3,000 people working on it. The IRS says it blocked 350,000 fraudulent returns in 2012, preventing $2.5 billion in fraudulent payments.

The IRS has made some progress, but it still has a lot of work to do

The IRS has been developing an increasingly elaborate suite of automated filters designed to detect fraudulent returns. If a return is flagged as potentially fraudulent, it's set aside for further investigation by an IRS agent.

The IRS has been trying to improve its filters by cross-referencing the information in tax returns with information the agency obtains from other sources. The Social Security Administration provides two important types of information: wage data and data on when taxpayers die. If the data in a tax return doesn't match the SSA's wage data, or someone tries to claim a refund for a long-deceased taxpayer, the IRS can investigate.

The IRS is also trying to combat fraud at the time refunds are paid. They have enlisted banks to monitor their customers' transactions in an effort to identify questionable activity — such as a single customer receiving many refunds.

When fraudulent returns are identified, the people responsible for them can be referred to the Justice Department for criminal prosecution.

Have those anti-fraud efforts worked?

The IRS has made some progress, but it still has a lot of work to do.

A September 2013 report by the Treasury Department's Inspector General found that in the 2012 tax-filing season (for 2011 income) the IRS had approved 1.1 million tax returns that resulted in the payment of "potentially fraudulent tax refunds" that were worth $3.6 billion. That was down from the $5.2 billion the watchdog agency had found in an audit from the previous year. But it's still a huge number.

Another indicator comes from Nina Olson, the IRS's official taxpayer advocate. Earlier this year she reported showing that the number of taxpayers complaining to her office about identity theft grew slightly from about 54,000 in 2012 to 57,000 in 2013.

There are also signs that the increasingly aggressive use of fraud filters have inconvenienced legitimate taxpayers. Olson noted in Congressional testimony last year that, based on preliminary analysis, 89 percent of tax returns that got flagged by the IRS's anti-fraud filters were eventually deemed legitimate.

Rising prosecutions could have a downside too. "I'm concerned that public pressure to prosecute these crimes quickly will lead to sloppy investigations," Gelfand says. That could put lead to some innocent taxpayers facing criminal prosecution.

How could the IRS do a better job of combatting identity theft?

Employers send the feds the same W-2 wage data that they send to employees. So it should be possible for the IRS to compare the data they get from employers to the figures employees report on their returns.

But the IRS doesn't do this. One reason is that the deadline for sending W-2 data to the government is 2 months later than the deadline for supplying data to employees. And employers with fewer than 250 employees still have the option to file these forms on paper.

So the IRS often receives a taxpayer's return long before it has received and processed the associated W-2s from employers. Rather than wait until W-2 data is ready, potentially delaying refunds by months, the IRS sends out checks without checking to see if the wage and withholding data on W-2 forms matches the data on tax returns.

Nina Olson, the IRS's official public advocate, has been calling for this system to be overhauled for years. But the IRS can't require employers to file earlier on its own, nor can it require all employers to file electronically. Only Congress can do that.

How else could tax-related identity theft be reduced?

A fundamental problem with our current system for filing tax returns is that the IRS never tries to directly confirm the identity of the person submitting a tax return. If you file a return claiming to be John Smith using John Smith's Social Security number, the IRS just takes your word for it unless it finds some reason to think you're lying.

Credit reporting agencies verify consumers' identities with questions like this one.

But in the age of the Internet, the IRS should be able to actually identify taxpayers. For example, when consumers request a copy of their credit report from the government-sponsored AnnualCreditReport.com, the site asks them a series of questions about the names of old employers, streets they used to live on, and so forth, to verify their identity. A similar approach could work for the IRS.

The IRS could ask taxpayers to provide a phone number and email address on each year's return, which would help contact the real taxpayer the following year. They could partner with Facebook, which already knows most Americans' real names.

There are lots of options. The point is that the best way to stop crooks from stealing taxpayers' identities is to actually verify that a return came from the legitimate taxpayer. Doing that may require revamping the process for filing tax returns, but that system could stand to be overhauled anyway.