Everything you need to know about bank capital

Share All sharing options for: Everything you need to know about bank capital

What is bank capital?

Somewhat confusingly, capital is also sometimes called "equity," which in this context is exactly the same thing.

Of course it's possible to make an all-cash purchase of a house. You have to be pretty rich to pull this off, but if you are rich you can buy a $200,000 house by wiring $200,000 to the previous owner. Now you own the house free and clear. No mortgage, no leverage. It's all capital.

For regular people, whether or not to use leverage when making a large purchase is generally a question of necessity. Few people have enough cash on hand to buy a house, so leverage is generally necessary. Many people take out loans to buy a car or to pay for college tuition for similar reasons. But giant companies have lots of money. Restricting themselves to all-cash (or all-equity or all-capital; these terms mean the same thing) as an investment strategy is perfectly possible. Indeed, many companies don't use leverage at all. For these big companies, the decision as to whether to use leverage and how much to use is all about strategy.

Why do (some) companies use leverage to make investments?

A normal household will normally go into debt to pay for a house or college tuition because they don't have enough money to do so otherwise. This sometimes happens in the business sector, especially with smaller firms. But successful companies also have plenty of cash flow from profits that they can use, and the option of raising more money by selling additional stock is always on the table.

Leverage is used, when it is used, largely for strategic purposes.

A leveraged investment, if it works out, can be much more profitable than an unleveraged one.

Imagine you make a $100, zero-leverage investment in something. A year later, your investment has really paid off and the asset is now worth $200. That's a $100 profit on your $100 in initial investment. Nice work!

Do all companies use leverage?

No. Borrowing money to fund investments is a common business practice, but it's far from a universal one. For a many years Apple had no debt, for example, and when they did start selling bonds, it was more a part of their ongoing efforts to minimize their corporate income tax bill than anything else.

At the other end of the size spectrum from Apple, brand new startup companies generally find that nobody will lend them large sums of money. When they need money to grow and invest they go to venture capital firms that give them cash (or capital, hence "venture capital") in exchange for an ownership share in the startup.

Most companies do engage in some debt finance, and across all of corporate America debt finances about 30 percent of investment: 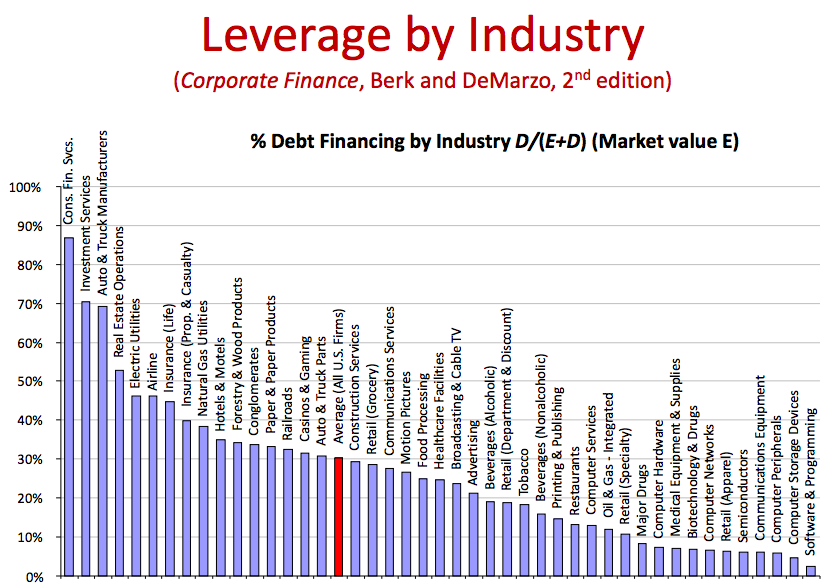 There are considerable sector-to-sector differences, with technology companies being generally debt-shy and financial companies very indebted.

In other words, while a company that is carrying only a little debt relative to its overall size stands very little chance of going bankrupt, a company with a lot of debt can be easily pushed into bankruptcy by small misfortunes. Consider an airline with a small amount of debt that's faced with a couple of bad years in a row due to high jet fuel prices. In a pinch, the airline can always sell off a plane or two to repay what it owes. But if that exact same airline has a lot of debt, then liquidating enough assets (i.e., selling enough planes) to repay the debt is going to cripple the company. As long as business is good, the highly indebted airline can keep using profits to pay what it owes. But if business takes a downward turn, the airline is going to be in very serious trouble and may need to file for bankruptcy and not fully repay its debt.

Because heavily indebted (or highly leveraged) companies are at greater risk of going bankrupt, lenders (whether banks or the bond market) typically demand a high interest rate to loan to them. In other words, the more debt you're carrying, the more expensive additional debt becomes.

In normal circumstances, this dynamic dissuades firms from borrowing too much. But banks are largely immune to this dynamic, thanks to government programs designed to prevent them from failing.

Why do banks carry so much debt? Why is it a problem?

Banks carry a lot of debt largely for the same reason that bank debt is a problem: when a bank fails and can't pay people the money it owes, it tends to set off panics and runs on other banks with disastrous consequences for the rest of the economy.

Because of those disastrous consequences, governments generally try to prevent banks from defaulting on their debt. They do that either by arranging for a failing bank to be taken over by another bank, or else by spending government money to avoid default. In some circumstances, this is an explicit matter of public policy. Bank deposits — a major form of bank debt — are guaranteed by the FDIC. When a conventional bank fails, the FDIC normally sells it to another bank. If that can't be arranged, the FDIC itself pays off bank debts. 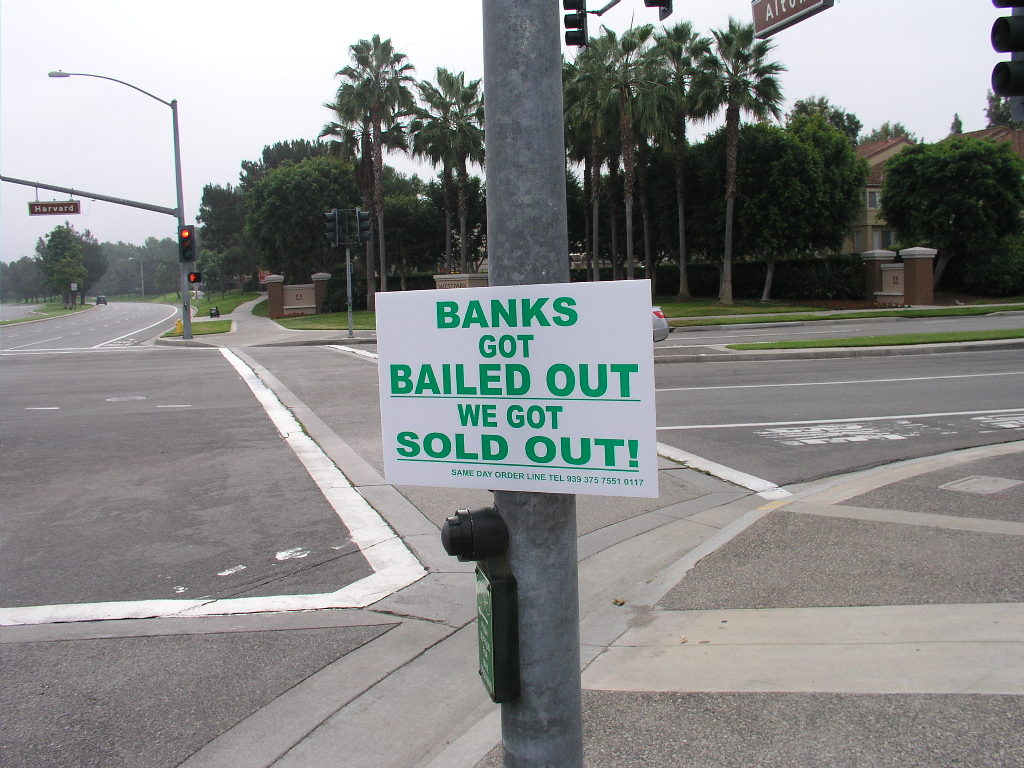 But ad hoc arrangements can also be made. When the investment bank Bear Stearns was at risk of bankruptcy, Treasury and Federal Reserve officials made a hasty arrangement for it to be sold to JPMorgan Chase. When no buyer could be found for Lehman Brothers, another underwater investment bank, the government officials allowed it to fail in September 2008. That touched off an acute financial crisis, after which Congress created the Troubled Assets Relief Program (TARP) to prevent future failures.

The fact that these explicit or implicit bailout guarantees exist means that banks can get away with borrowing much more heavily than a normal company could. Depositors don't care how risky the banks to which they give their money are, because they know that their money isn't at risk. The largest banks also benefit from a perception that they are "too big to fail." Research published in March 2014 by the New York Federal Reserve Bank confirms longstanding suspicion that this lets them obtain non-deposit debt at a discount, and this access to discount debt leads them to engage in riskier behavior.

What are some proposals to reduce bank debt?

The main thing that can be done to reduce bank debt is simply to enact regulations that limit it. A recent international agreement known as Basel III is forcing major global banks to finance at least 3 percent of investment with equity. A new rule from the Federal Reserve and other American bank regulators will boost that to 5 percent for the largest American banks. But there are many proposals to go further than this.

Senators David Vitter (R-LA) and Sherrod Brown (D-OH) introduced legislation in 2013 that would impose a 15 percent equity ratio on the largest banks. 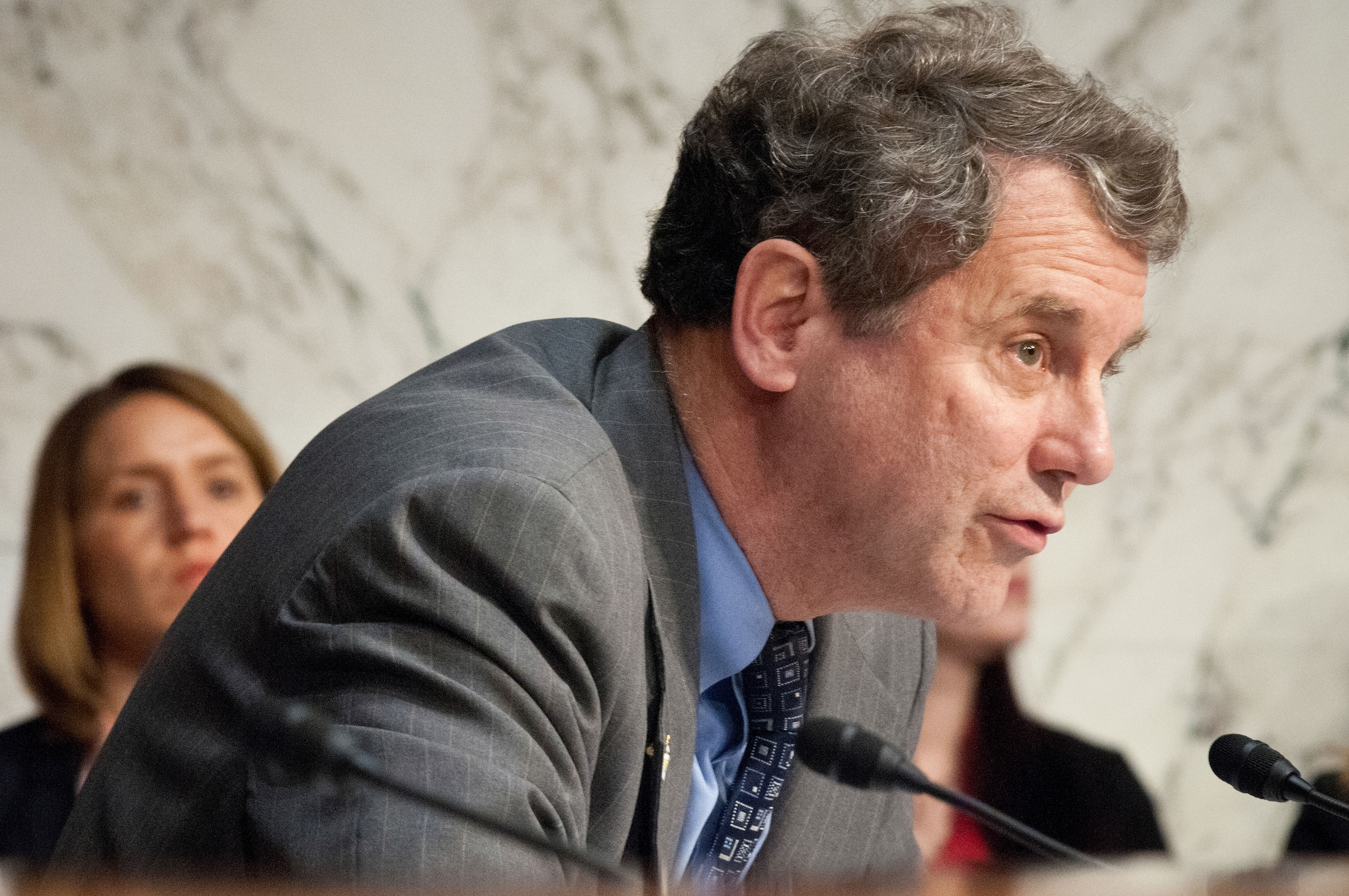 In their widely read book, The Bankers' New Clothes, economists Anat Admati and Martin Hellweg argue for a 20 percent to 30 percent equity ratio.

A somewhat different approach has been espoused by the economist John Cochrane, who proposes a tax on bank debt rather than a hard regulatory cap.

What are the main arguments against reducing bank debt?

To make their case, they advance two main arguments.

One argument says that adopting tighter regulation would disadvantage American banks relative to foreign banks. This is difficult to dispute, and to the extent that you believe a large and profitable banking sector that can outcompete foreign banks is important, this is a reason to be wary of tighter regulation.

The other says that imposing tighter regulation on large banks would reduce the amount of lending they can do by making it less profitable. This is probably accurate. But the inference that this would be bad for the economy is tougher to draw. If large banks borrowed less money, those funds would probably flow through other channels. Either more money would pass through smaller banks, or else more money would be lent directly to non-financial businesses through the bond market. In other words different investments would be financed in a world of tighter regulation of bank debt, but not necessarily fewer investments.

How the right’s radical thinkers are coping with the midterms