Removals vs returns: how to think about Obama's deportation record

Share All sharing options for: Removals vs returns: how to think about Obama's deportation record

Earlier this week, I wrote a piece noting that the Obama administration has deported 2 million people — the most of any president in history.

Some critics took issue with that characterization — and the dispute here hinges on the fact that there's no longer any official definition of "deportation." The terminology has changed as policy has changed, and that's creating some confusion today as to what should count as a deportation.

THERE'S NO LONGER AN OFFICIAL DEFINITION OF 'DEPORTATION'

Currently, the federal government uses two different terms for when it apprehends an unauthorized immigrant and expels him or her from the country. There are "removals," which involve a formal court order. And then there are "returns," which do not. In my article, I used "deportations" to refer to removals only — for reasons explained below.

This distinction matters a fair bit. The Obama administration is on pace for more removals than any president in history. But there have been far fewer returns under Obama than under George W. Bush (chart via The Federalist,* which counts both "removals" and "returns" as "deportations"): 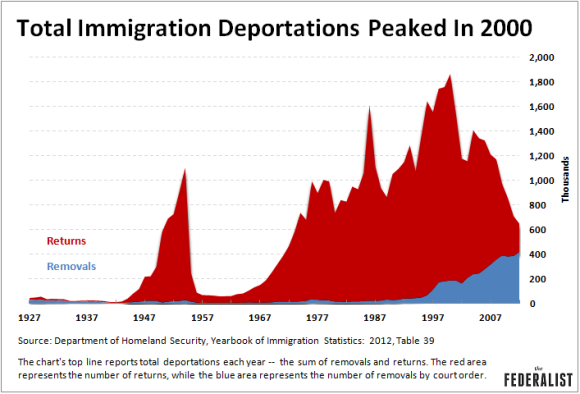 So if you think that measuring returns plus removals is the best way to judge enforcement, then it looks like Obama is less tough than Bush. But there's a strong argument that removals are the appropriate metric to use in this debate. Here's why.

1) 'Deportation' is no longer an official legal term

"Deportation" was an official legal term before 1996 — any time the government removed someone from inside the country who was in the US unlawfully, that was considered a deportation.

There were also "exclusions," which was the term for denying entrance to someone who was trying to get in.

In 1996, both of these processes got rolled into a single process called "removals." Likewise, a formal "order of deportation" became an "order of removal."

But in the immigration debate, people kept talking about "deportations" — a term that didn't have an official legal meaning anymore, and so could be used to refer to different things.

These days, the term "removal" includes everything that used to be considered a deportation or exclusion.

"Returns," meanwhile, are a very specific immigration enforcement action. According to Theresa Brown of the Bipartisan Policy Center, returns refer to Canadians or Mexicans who were trying to enter illegally and were apprehended at their own border. These people, instead of being formally placed into proceedings, are simply turned around and prevented from entering the United States. (Before 2006, this was known as a "voluntary departure.")

Changing the terms has made it difficult to track immigration statistics over time. So, in recent years, the government's Office of Immigration Statistics has put out tables showing the number of "returns" and "removals" going back to 1927 — reinterpreting old historical data with the new terminology.

3) Removals have much harsher consequences than returns

PEOPLE WHO ARE RETURNED ARE NOT SUBJECT TO FORMAL CONSEQUENCES

Unauthorized immigrants who are removed from the country are ineligible to apply to re-enter legally for a period of years. If they try to come back to the US illegally and succeed (as of 1996) their removal order is "reinstated" and they can be deported again without another trial.

People who are returned, by contrast, are not subject to formal consequences — they can turn back around and try again, or they can apply to re-enter the country legally.

In the three years between fiscal year 2009 and 2012, most of which was under Obama, there were 1.6 million returns and 1.6 million removals. The Obama administration, from February 2009 to the present, has removed more than 2 million people.

WHEN DISCUSSING THEIR RECORDS, BUSH and OBAMA USE DIFFERENT STATS

So the combined removals and returns under Bush are much higher than under Obama. But Obama will pass Bush's removals by the end of this year.

The administrations have added to the confusion by emphasizing different statistics. The Bush administration appears to have counted both removals and returns when discussing its immigration enforcement (but doesn't appear to have called them both "deportations"). The Obama administration, by contrast, has counted only removals.

During the Bush administration, the thriving economy drew a lot of unauthorized migration. Many of these people were apprehended at the border. Still, many slipped through and the unauthorized population grew significantly.

At the time, many critics derided the Bush administration's returns as a "catch-and-release" system — the administration was turning away people at the border who would then come back and try again.

So, in response, the Bush administration decided to ramp up the number of formal orders of removal (and criminal charges) for people who would previously have been returned, says Theresa Brown of the Bipartisan Policy Center, who was a Customs and Border Protection and Department of Homeland Security official at the time.

Bush officials figured that relying more heavily on removals would deter people from repeatedly trying to cross the border. This system has persisted under Obama, and is now part of what's called the Consequence Delivery System.

5) Obama has continued to prioritize removals, while having fewer people to return

The Obama administration continued the strategic shift toward removals that began under Bush. That's why Obama is on pace to eclipse Bush's removal totals.

UNDER OBAMA, FEWER PEOPLE ARE TRYING TO enter IN THE FIRST PLACE

At the same time, returns have dropped under Obama. One reason: fewer people were trying to get into the country in the first place. Due to the recession, the number of immigrants trying to cross illegally dropped substantially. As a result, Border Patrol agents were apprehending many fewer people, meaning there were fewer people they could return.

Furthermore, more and more of the people the Obama administration was apprehending, says Brown, were people crossing from Mexico who weren't from Mexico. Those people couldn't be returned either — "returns" can only be used for Mexicans on the southern border (and Canadians on the northern one). And due to the Consequence Delivery System, the administration preferred to remove people rather than return them. "That combination of factors," says Brown, "meant that the number of returns has gone down at the same time the number of removals has gone up."

Many critics of the Obama administration who want more immigrants expelled from the country point to the removals/returns distinction in order to argue that Obama is inflating his record on enforcement. After all, the total of removals plus returns is lower under Obama than it was under Bush. (See the Center for Immigration Studies on this.)

Ironically, the administration is now making this exact same argument — possibly because it's trying to fend off heavy criticism from Latinos and immigrant-rights groups.

But this argument is both overly simplistic and needlessly confusing. The story of the Obama administration on immigration enforcement is that more people than ever are being expelled from the country in a way that prevents them from returning to the US legally or illegally — even though net unauthorized migration has been low and the unauthorized population of the country is down from its 2006 peak.

That's a perfectly suitable definition of "deportation." The government simply can't return more people than are trying to come in to begin with — so returns are partly dependent on the state of the economy. Removals, on the other hand, tell the story of the deliberate policy choices made over the last decade that are having lasting consequences for the people being expelled.