Share All sharing options for: The SEC's just been caught colluding with the banks it's supposed to regulate

Reuters finance blogger Felix Salmon had a post earlier this week headlined "Yes, the SEC was colluding with banks on CDO prosecutions." This ought to be huge news. The Securities and Exchange Commission is one of the main agencies that's supposed to be regulating Wall Street. But they've been essentially caught red handed working together with Goldman Sachs to make it look like Goldman was paying a huge fine when really they're paying a small one. Sadly, though, the story probably won't get much attention from the general public because the CDO prosecution issue is a little obscure and it hasn't really been in the news for years.

But people ought to understand this story. It's a very big deal not so much because the case was all that important, but because it speaks directly to the question of whether or not our government institutions have the will and ability to regulate the financial sector.

To understand what that means, start with something simple like a mortgage or an auto loan. The good news for a lender is that he earns a profit — the interest rate — on the money leant out. The bad news is that the borrower may default.

So now imagine you had ten roughly similar loans. A person who owned-one tenth of each of those loans would earn the same interest rate as someone who owned a single loan, but the odds of all ten loans defaulting simultaneously are low. A package that consisted of one-tenth of ten separate loans would be a very simple form of collateralized debt obligation.

The same principle can be applied, however, to create very complicated securities. Investment banks did a lot of this during the pre-crisis years, and belief that these securities were very safe fueled a lot of lending activity. 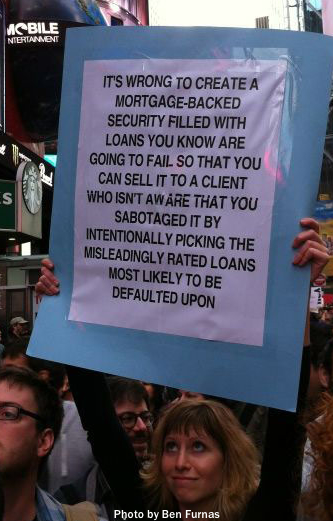 What did banks do wrong?

One set of allegations involved banks creating and marketing CDOs that they believed to be risky, marketing them as safe, and then making side-bets that the CDO in question would go bust.

Another set of allegations involved banks marketing CDOs whose contents were actually selected by third parties — third parties who were making bets that the CDO would go bust.

Once the full extent of the financial crisis became clear, these sort of deals were widely criticized and the Securities and Exchange Commission (SEC) which is supposed to prevent misconduct in financial markets began a series of investigations.

the SEC's conclusion was extremely fishy

What's wrong with that?

Well, nothing. It's more about what happened next. Or rather about what didn't happen next. Each bank settled a single case, and then there were no more cases. But superficially, each of the banks involved in the litigation had created several CDOs that looked similar in the relevant ways. It's of course perfectly plausible that further scrutiny revealed that not every superficially similar CDO was equally bad. But the SEC's conclusion that every bank had created one and only one prosecution-worthy CDO was extremely fishy. That would be one heck of a coincidence.

What do we know now?

What is now looking clearer and clearer is that the settlements were not as advertised. The banks paid money — in Goldman Sachs' case $550 million — not to settle one CDO suit, but to settle all the CDO suits. So rather than Goldman paying $550 million for wrongdoing around the Abacus CDO and then facing 10 more charges related to 10 other suspicious CDOs, it was paying a price of $55 million per CDO to settle all 11 cases. Except the SEC didn't want to look like it was letting the banks get away with a slap on the wrist, so it worked out an arrangement whereby both sides would publicly act as if only one case had been settled while agreeing under the table that all claims were now resolved.

How do we know?

We know this because of Freedom of Information Act requests filed by American Lawyer pursuant to their investigation of the Abacus investigation. In her article on the subject of the 2,000 pages of documents she received, Susan Beck focuses on a slightly different issue — the internal disagreements among SEC staff about whether to pursue the Abacus investigation further up the Goldman Sachs hierarchy rather than stopping with the relatively low-level Fab Toure. But as Felix Salmon observes, Beck's article (and the documents she obtained to write it) also confirm his longstanding suspicion of collusion between the SEC and the banks on the question of settlements.

Here's the nut, per Beck. Robert Khuzami is the top enforcement guy at the SEC. David Kotz is the SEC's inspector general, charged with oversight of the agency's performance:The SEC filed its case against Goldman and Tourre on April 16, 2010. Three days later Goldman reached out with a $500 million settlement offer, according to an email that Reisner sent Khuzami. Although that proposal was close to the final payment, it took another three months to announce a settlement. As Khuzami described to Kotz, Goldman wanted a global settlement that resolved not just the Abacus investigation but the SEC's probes into roughly a dozen other Goldman CDOs.

Khuzami didn't want to give Goldman that public victory. When the SEC and Goldman announced on July 16, 2010, that the investment bank would settle the Abac­us case for $550 million, the SEC said in a press release that the settlement "does not settle any other past, current or future SEC investigations against the firm."

Khuzami was determined that Goldman's payment only be linked to ABACUS. "This was not a $550 million settlement for 11 cases," Khuzami told Kotz. "We may tell Goldman that we are concluding our investigations in these other matters without recommending charges, but that doesn't mean we're settling them. And that was an important point for us, because we didn't want them out there saying, you know, they settled 12 CDO investigations for an average of $30 million each, and, you know, didn't [Goldman] get a great deal."

In other words, Khuzami agreed to a global settlement with Goldman, but then lied about what he'd agreed to. And he more or less got Goldman to go along with the lie as part of the agreement. There is still no smoking gun to prove that the exact same process played out in the settlements with the other banks, but the pattern of one-and-only-one prosecution followed by a settlement is the same everywhere. It's always been a suspicious pattern. And now in the one case we've been able to look into, we know there was collusion. It's deeply suspicious.

How important is this CDO thing? Did this cause the crisis?

The CDO prosecutions were not, on their own terms, particularly consequential. It's probably more accurate to say that the funny business being alleged was caused by the same things as caused the overall financial crisis — a climate of hubris about the ability of complicated securitization algorithms to eliminate risk — than to say that what happened here caused the crisis.

So is this story important?

It's hugely important. Much more important than the CDO cases as such ever were. The reason is that it exposes a post-crisis pattern of troubling coziness between a major financial market regulator and the major regulated entities. Among other things, to pull something like this off requires an exceptional level of trust between high-ranking SEC officials and high-ranking bank officials. The one case may not be particularly important, but enforcement of securities law in the aggregate is certainly important. The strong implication of this story is that there is — or at least was as of a couple of years ago — a culture of impunity on Wall Street, abetted by an SEC that is more interested in looking tough in press releases than in actually acting tough. 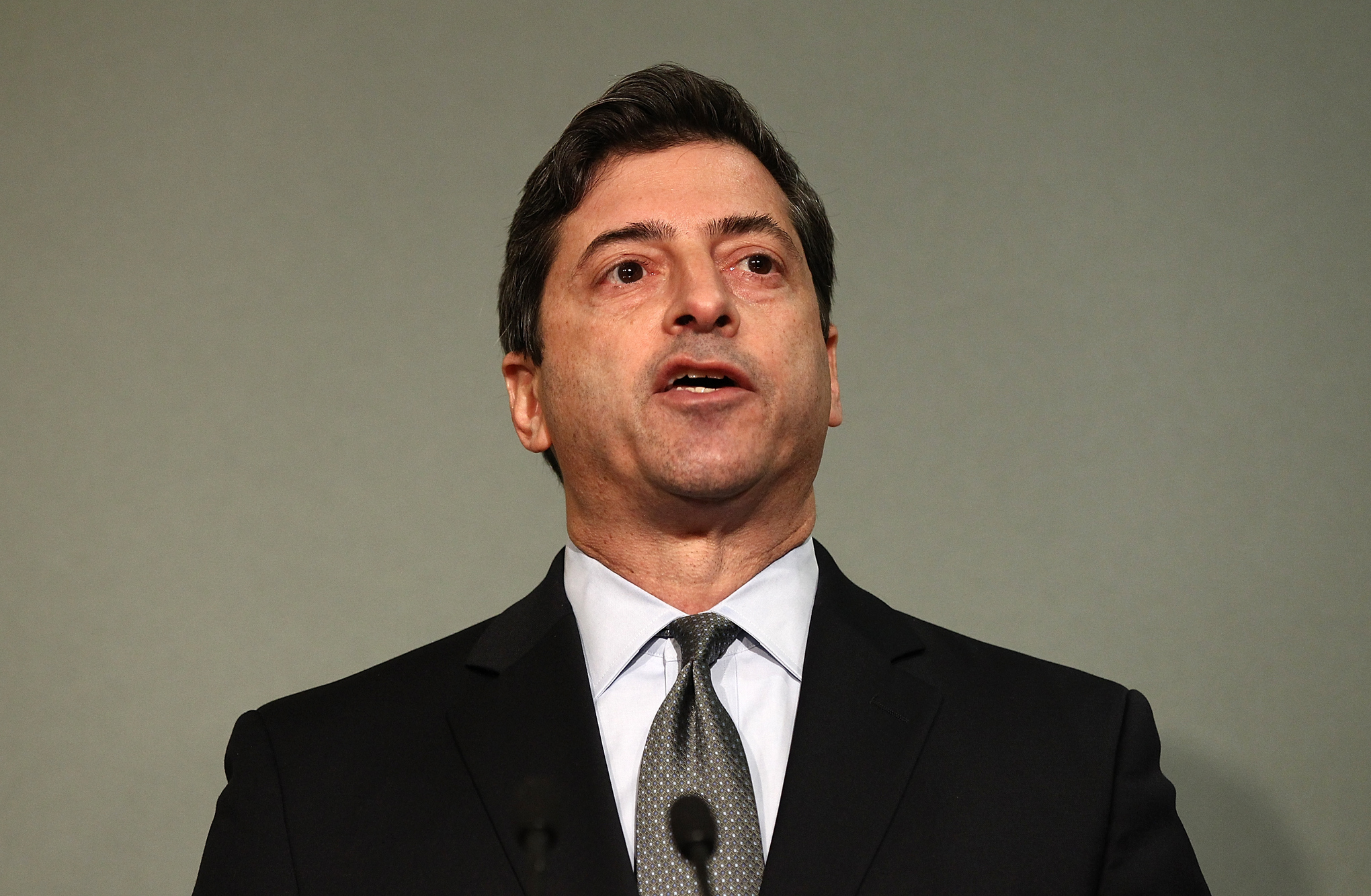 Where is Robert Khuzami now?

Conveniently enough, he's working in Kirkland & Ellis' government and internal investigations practice group. In other words, if your company finds itself in hot water with a regulatory agency, Khuzami can help advice you on how to deal with it. He might, for example, be able to suggest that for regulators the appearance of a big settlement is sometimes more important than the reality so that the key to getting a favorable arrangement is to let the regulators post wins on the board that they can brag about in public. The viability of this kind of bargaining tactic isn't necessarily obvious to people who've never worked inside the agencies in question, so experience leading them can be very valuable in the private sector.