Suicide attempts in America, by the numbers

Share All sharing options for: Suicide attempts in America, by the numbers

Suicide rates in America are rising.

It's reached the point where suicides are now responsible for 12.4 deaths per 100,000 people, making it the tenth most common cause of death nationwide. More people die from suicide than from homicide or car accidents.

suicides are now the tenth most common cause of death nationwide

But suicide attempts, it turns out, follow subtle and surprising patterns. In a recent study, researchers from the University of Cincinnati uncovered some of these trends by analyzing more than one million emergency calls made into the the country’s 57 poison control centers between 2006 and 2010 that were coded as "suspected suicide."

The vast majority of these cases did not result in death: whether through medical intervention or other means, 99.6 percent did not lead to suicide. That's true of self-poisoning attempts as a whole, which are the most common method of attempted suicide in the US but have significantly lower success rates than other methods.

But the researchers believe that this makes the data set that much more valuable — it represents less carefully planned out attempts that are probably more strongly driven by impulse, and so are more likely to be influenced by external factors.

For the mental-health professionals who work to prevent suicide, knowing how things like the day of the week or season of the year influence the likelihood of suicide attempts can help in allocating resources and time most effectively.

The most suicide attempts are on Sundays, Mondays and Tuesdays 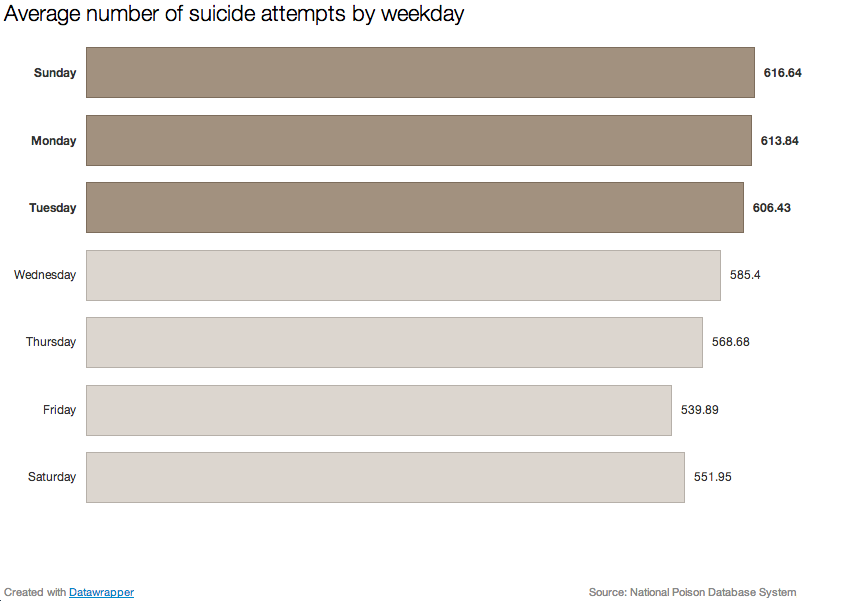 In total, the highest number of suicide attempts fall on Sundays and Mondays, but the researchers noticed a demographic split: for children and teenagers, Monday and Tuesday were the most common days. 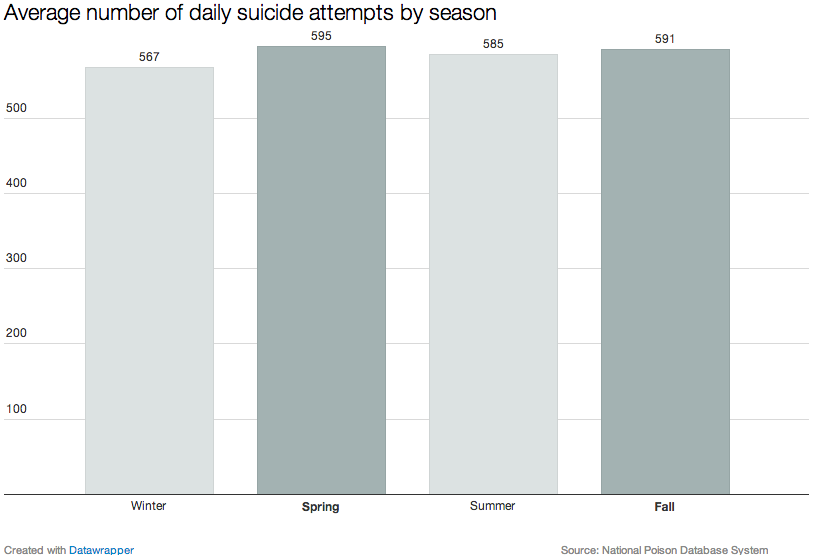 Contrary to what you might expect, there are actually fewer suicide attempts during the short days of winter than any other season. Fall has slightly more suicide attempts, and spring has the most of all.

What to make of this surprising trend? Spring (like Sundays and Mondays) is generally viewed as a new beginning. The researchers speculate that many suicides might be the result of a person with depression reaching this new beginning and finding that less has changed than they expected, or not having the ability to endure everything that'll follow it.

Attempts spike on a few specific holidays, but not others 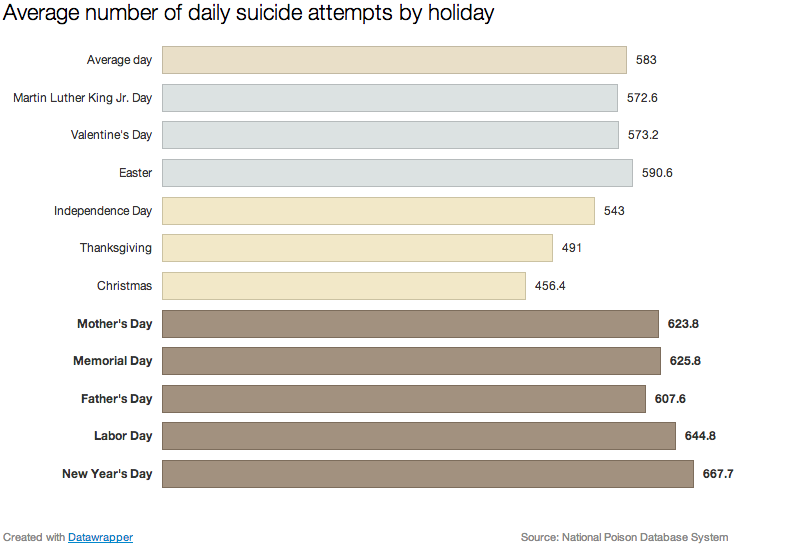 The report's most interesting findings came when the researchers looked at suicide attempt rates on specific holidays.

Compared to an average day — on which 583 suspected attempts were called in to poison control centers — a few holidays featured far fewer suicide attempts: Independence Day, Thanksgiving, and Christmas. This might be explained by the fact that these are all holidays when people are physically with their extended families, and less likely to attempt suicide.

But there's another group of holidays on which significantly more suicide attempts occur than average. Two are Mother's Day and Father's Day — holidays that might remind people of strained or absent relationships with parents or children. Two others are Memorial Day and Labor Day, when schools and offices are closed, giving people more time and space to make an attempt.

One day combines this second characteristic with another that drives some of the other trends on this list — the sense of a new beginning. Because of this, New Year's Day features far more attempted suicides than any other day of the year.