7 charts that show how Americans spend their time

Share All sharing options for: 7 charts that show how Americans spend their time

Every day, Americans average a little more than half an hour making food, 43 minutes socializing and communicating, and about 11 minutes doing lawn and garden care. We know this because of the American Time Use Survey, a ridiculously detailed trove of data the Labor Department maintains. The department just released a new batch of this data on Wednesday.

If this doesn't sound exactly like how you spend your day, it's because those data contain multitudes: students, retirees, and stay-at-home parents, for example, in addition to working people. Drilling down gives a better picture of what Americans do all day.

How all of America spends its time 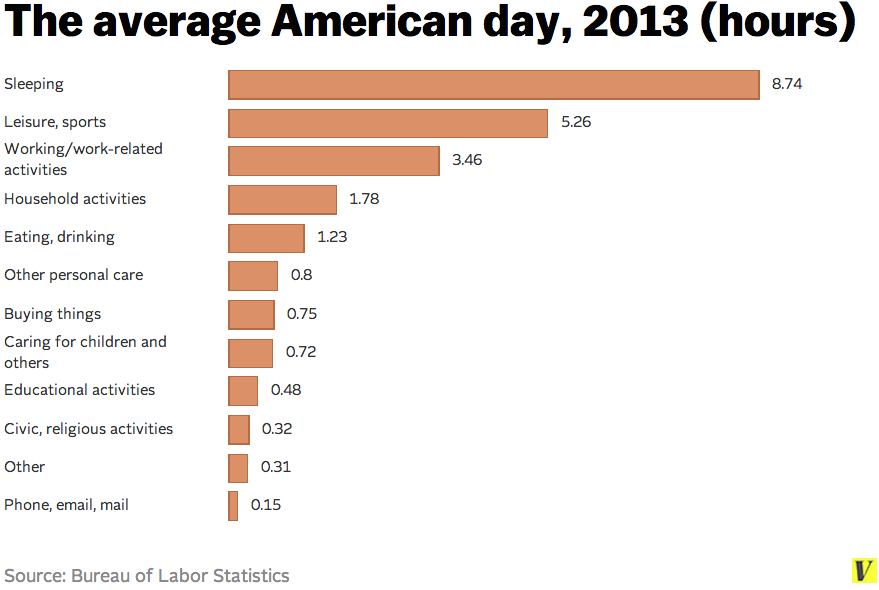 Not many people's days look exactly like this — 3.5 hours of work, 5.3 hours of leisure time — because this takes into account everyone 15 and older, including retirees and college students, as well as both weekdays and weekends. But take this chart as a big insight into how all of America spends its time. As a nation, we spent one-third of last year sleeping and around 50 percent more time having fun than working. But we also spent more time doing housework, like cleaning and making food, than we did actually consuming that food. 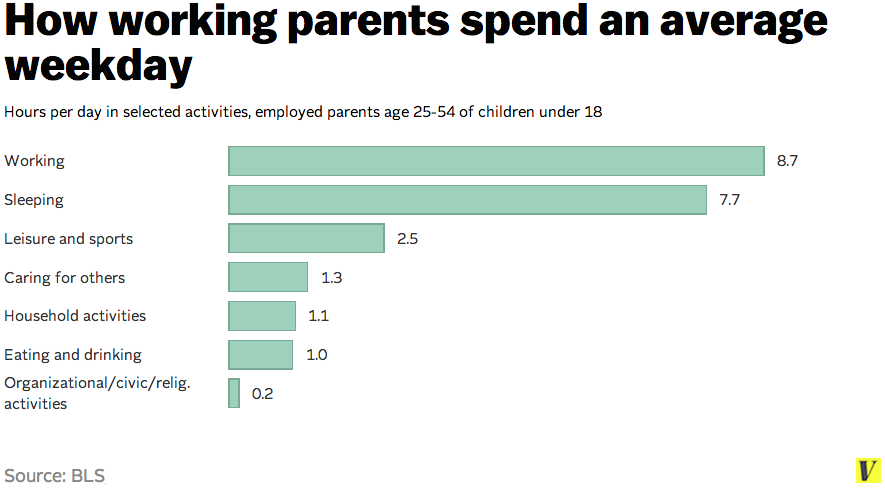 This is a glimpse into a typical weekday for some of the busiest Americans: working parents. They're not quite getting eight hours of sleep per weeknight, and they're spending a little over an hour a day focused on caring for their kids and others. 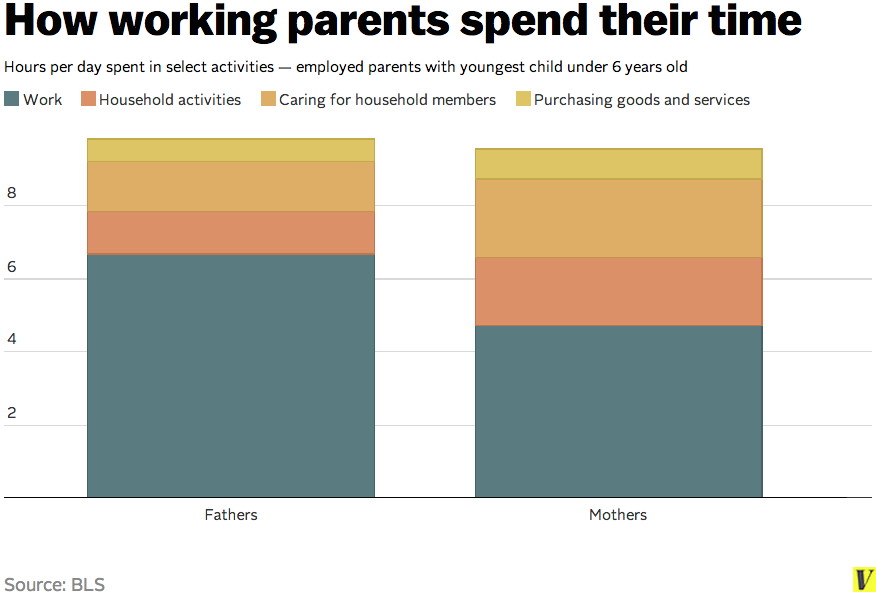 Among adults 18 and older, women spend far less time at work than men — even among full-time workers — but more time doing things like housework and cooking.

This trend is pronounced among parents of young children. Among fathers and mothers who have kids 6 and younger, dads spend, on average, almost one more hour at the office per day than moms (this includes part-time workers and both weekdays and weekends, hence the 5- and 6-hour workdays). But add in housework, childcare, and shopping, and moms end up working almost as much as dads. That said, dads also relax more, getting 40 minutes more leisure time per day, on average, than moms. Moms, meanwhile, get slightly more sleep and also spend slightly more time on educational activities, like going to school or doing homework.

There are complicated links between education and time use 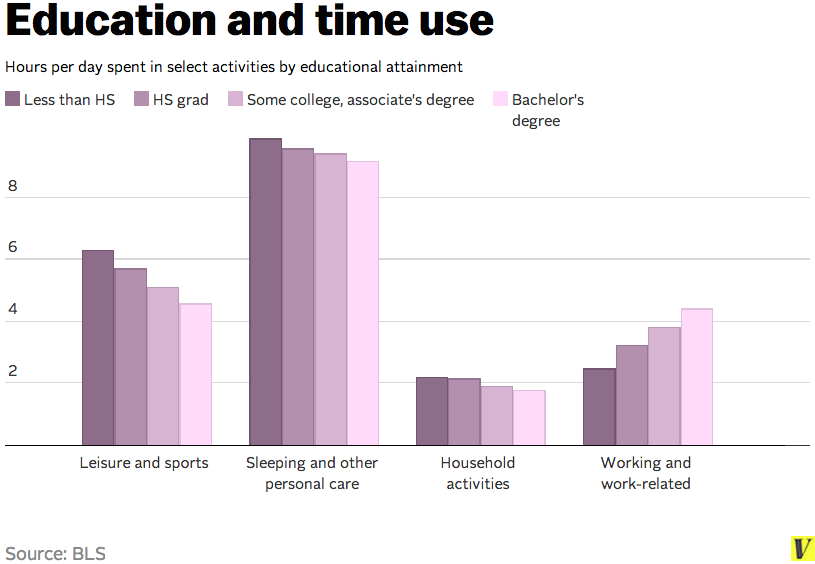 Interestingly, time use varies a lot by educational attainment. Above are four areas where the trend is most pronounced. People with lower educational attainment spend more time doing leisure activities, sleeping, and keeping house, while people with more education tend to be at work more. There are other patterns as well — more educated Americans also tend to spend slightly more time eating and drinking, as well as talking on the phone or using email.

There are all sorts of reasons why these patterns show up, but one key one might be that working pattern. Less-educated people tend to have a harder time finding work than more-educated Americans, which would naturally lead to fewer working hours and more hours for other activities. Likewise, it's possible some of the more educated Americans who have jobs are putting in long hours — extremes on both ends can skew these averages.

We watch a lot of TV

Americans watch far more TV in their downtime than doing anything else. Of the 5.26 hours per day Americans had for leisure time on average in 2013, we spent most of it watching TV. Nothing else even comes close, whether it's being on the internet, exercising, or reading. Why tackle The Naked and the Dead, after all, when you can watch Naked and Afraid? 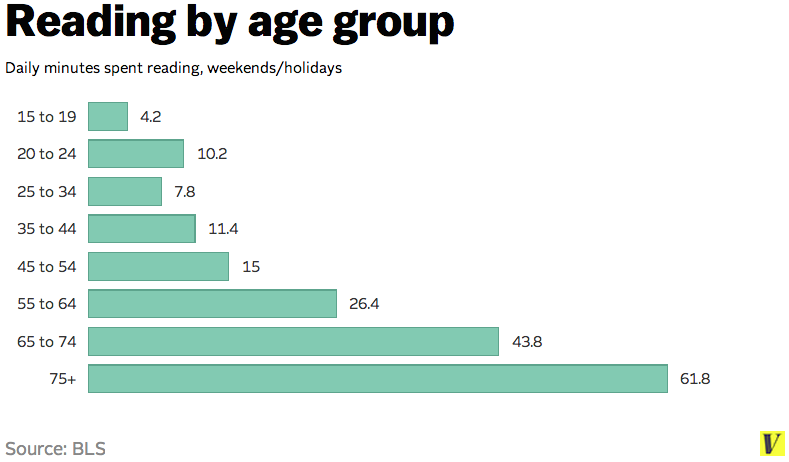 When we do have free time, the older we are, the more likely we are to read. Even on weekends and holidays, when there was more abundant free time, teenagers 15 to 19 only read for around 4 minutes a day. The oldest Americans, meanwhile, read for more than an hour a day. These data only include reading for fun, however, which may be why the count for the student-age population is strangely low.

The kids seem to love their internet 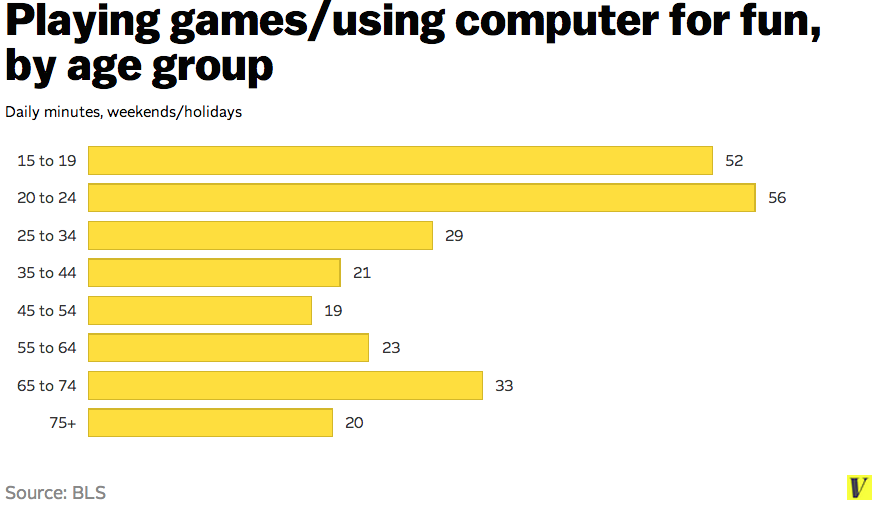 One thing young Americans are doing instead of reading books appears to be going online. As of 2013, Americans age 15 to 19 spent far more time playing games and being on the computer for fun than any age group of adults 35 and older. Granted, this category includes any sort of games, so it could mean teenagers and young adults are spending a lot of time playing Clue or Parcheesi (or, more likely, they're playing video games). And even if they are online, they might be reading insightful news articles...but it may also just mean they're wasting time.