Share All sharing options for: The 2014 McCutcheon v. FEC case

The Supreme Court's April 2014 ruling struck down limits on how much donors could give, overall, to federal candidates, PACs, and party committees each election cycle.

What is the McCutcheon v. FEC ruling?

On April 2, 2014, the Supreme Court announced its ruling in the McCutcheon v. FEC case, the latest in a series of contentious decisions striking down limits on campaign finance.

At issue in McCutcheon was a law capping overall combined giving to federal candidates — no individual was permitted to give more than $48,600 in any one election cycle. (Individuals are allowed to spend much greater sums independently, but not to hand it over to the candidates themselves.) There is also a cap of $74,600 each year on contributions to all federal PACs and party committees.The justices' 5-4 ruling said that these caps were unconstitutional.

In the case, businessman Shaun McCutcheon argued that the cap violated his right to freedom of speech. McCutcheon gave money to several congressional candidates during the 2012 elections, and he wanted to give to several more — but he was limited by that $48,600 cap.

In past rulings on campaign finance, the Supreme Court has held that spending money on elections is an exercise of free speech, and therefore protected by the First Amendment. The court has attempted to balance this right against concerns about the possibility of corruption or "its appearance." In McCutcheon, the court found that "the Government may no more restrict how many candidates or causes a donor may support than it may tell a newspaper how many candidates it may endorse."

Did McCutcheon let billionaires give unlimited contributions to candidates?

Put another way, the ruling allowed donors to give a few thousand dollars each to as many candidates as they want. But it didn't allow a donor to give more than $2,600 to any one candidate, per election.

The ruling left open whether that restriction would survive future court challenges. As law professor Rick Hasen wrote at Slate at the time, "While Roberts goes out of his way to say that those base limits were not challenged today, he does not do anything to affirm that those limits are safe. In fact, he expressly says those limits don't prevent corruption, but are 'prophylaxis' — and that itself could provide a basis for striking them down."

What did Chief Justice Roberts say about money and corruption in McCutcheon?

Overall, Chief Justice John Roberts says he agrees that that there should be some limits on campaign finance to prevent corruption or the appearance of corruption. (This is what the Supreme Court has held since 1976.) However, in Roberts' view, "corruption" should be defined quite narrowly, because of the importance of protecting free speech rights.

In the McCutcheon opinion, Roberts wrote that limitations on campaign spending must "target what we have called 'quid pro quo' corruption or its appearance … a direct exchange of an official act for money."

In other words, little short of a direct bribe really counts. An outside group spending heavily on a candidate's behalf does not count as corruption, to Roberts, since the money never enters the candidate's possession. "Ingratiation and access … are not corruption," Justice Anthony Kennedy wrote in his Citizens United opinion, joined by Roberts.

Moreover, Roberts emphasized the incremental nature of the change in the McCutcheon ruling. "If there is no corruption concern in giving nine candidates up to $5,200 each, it is difficult to understand how a tenth candidate can be regarded as corruptible if given $1,801, and all others corruptible if given a dime," he wrote.

Why did four justices dissent from the ruling?

In campaign finance cases, the Supreme Court has weighed two competing interests against each other: (1) the First Amendment right to free speech, and (2) the government's interest in preventing corruption or its appearance. In McCutcheon, the court's majority ruled that capping overall federal contributions did too much to muzzle speech, and practically nothing to prevent corruption.

"Spending large sums of money in connection with elections, but not in connection with an effort to control the exercise of an officeholder's official duties, does not give rise to quid pro quo corruption," wrote Chief Justice John Roberts. "Nor does the possibility that an individual who spends large sums may garner 'influence over or access to' elected officials or political parties."

But the four liberal justices on the court — Ruth Bader Ginsburg, Stephen Breyer, Sonia Sotomayor, and Elena Kagan — disagreed. They argued that the conservatives defined "corruption" in the campaign finance system far too narrowly and downplayed the importance of stopping it.

"Where enough money calls the tune, the general public will not be heard," replied Justice Stephen Breyer in the dissent. Breyer also argued that the importance of preventing corruption is "rooted in the First Amendment itself," and "in the constitutional effort to create a democracy responsive to the people." So, in the liberals' thinking, restrictions on campaign finance spending strengthen the First Amendment, by preventing ordinary voices from being drowned out.

You can read all the opinions here.

What were the effects of the McCutcheon ruling?

McCutcheon allowed more money to be put directly into the hands of politicians and parties. Before the ruling, if a wealthy donor wanted to spend a lot of money on politics, he'd likely give to several politicians, party committees, and PACs administered by politicians — but then, when the donor hit the overall cap of $123,200, he couldn't give any more directly to them. He'd give instead to Super PACs and outside groups, which weren't subject to that cap.

After McCutcheon, it was possible that a donor, rather than donating a million dollars to an outside group, could give an equivalent amount of money to several politicians, PACs, and state and national party committees.

Reince Priebus, who chairs the Republican National Committee, said in 2014 that McCutcheon "allows us to go to our donors and say: 'Look, instead of being able to give to only nine Senate candidates, you can now give to the 14 that are most in play. And you can give to the Senate committee, the congressional committee and the RNC, and you can max out to all three.'"

Here are some limitations on campaign spending and finance that still existed at the time of the 2014 ruling:

The disclosure system: Candidates, PACs, party committees, and Super PACs must still disclose all of their donors and their spending to the FEC, which then makes that information public. Any other group that runs an ad mentioning a federal candidate had to report it to the FEC if it (1) was aired within 30 days of a primary or 60 days of a general election, or (2) if the ad specifically advocated a vote for or against the candidate. In the Citizens United ruling, Justice Anthony Kennedy's majority opinion specifically affirmed disclosure requirements as constitutional. Chief Justice John Roberts reaffirmed that in the McCutcheon ruling. Further disclosure rules are also permissible, but, as of 2014, seemed to have no prospect of passing Congress, being repeatedly blocked by Republican filibusters.

The ban on corporate giving to candidates: Corporations and unions can't give directly to candidates or parties, though they can give unlimited amounts to Super PACs and outside groups. In the 2010 Citizens United ruling, the Supreme Court didn't specifically address whether this ban was constitutional, but did leave it in place.

The soft money ban (cap on giving to parties): An infamous loophole in the campaign finance system allowed party committees to raise unlimited sums so long as the money was used for "party-building activity" — this was "soft money," and a new law banned the practice in 2002. The following year, a majority of the Supreme Court upheld the ban.

Who gave the most money to candidates around the time of McCutcheon?

The McCutcheon ruling eliminated the $128,600 cap on each individual's overall donations to federal candidates, PACs, and party committees. According to the Center for Responsive Politics, only 591 people in the country spent up to that cap in 2012 — but McCutcheon let them be free to contribute much larger sums, if they so chose.

The Sunlight Foundation studied the top 1,000 disclosed donors in the 2012 U.S. elections, all of whom spent more than $134,000 in that cycle. (They exceeded the cap by giving to Super PACs, which can accept unlimited donations.) The study found that these donors were mostly Republican — givers to GOP candidates outnumbered givers to Democratic candidates, two to one. 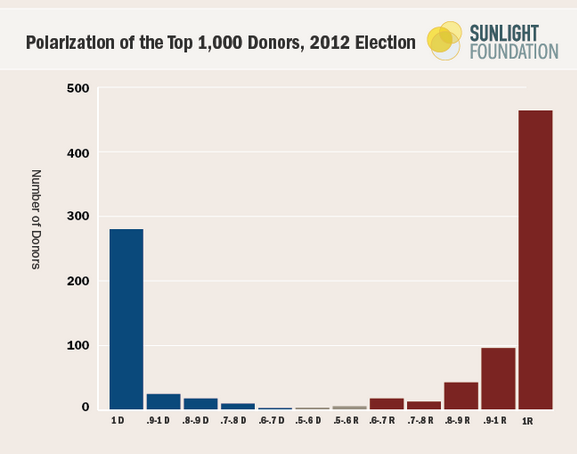 21.5 percent of these donors worked in finance, insurance, or real estate — more than any other sector: 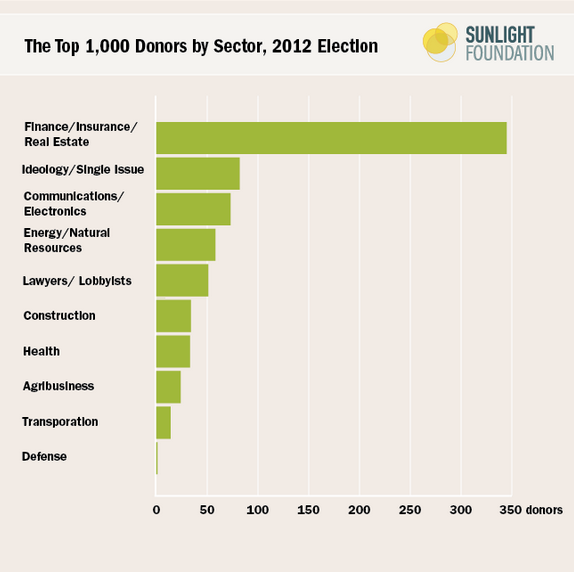 The Sunlight Foundation further studied the 20 donors who were getting closest to the overall contribution limit in 2014 — the one McCutcheon overturned. They found an even more lopsided ratio; 16 gave mainly to Republicans, and four to Democrats. Additionally, 11 of them worked in private equity or finance. They included:

No. While McCutcheon eliminated limits on total amounts individuals can contribute in an election cycle, it kept caps on how much a given person can give to one candidate, party, or political action committee in place.

As data from the International Institute for Democracy and Electoral Assistance made clear, that actually means the US system remained more restrictive than most other countries — even other rich countries. Out of 172 countries surveyed, only 30.6 percent placed a cap on individual contributions to candidates, including only 43 percent of European countries. And the countries that didn't cap donations weren't just poor or developing countries rife with corruption and weak democratic institutions — those countries without caps are in red on this map: 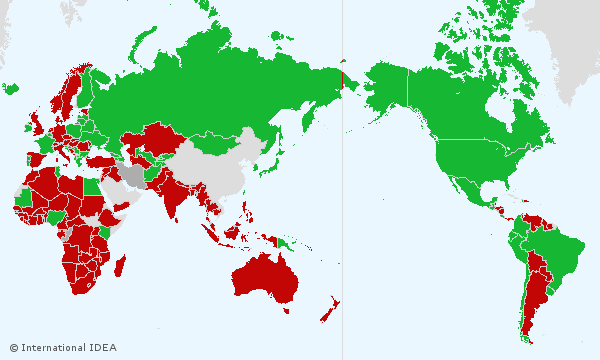 (Institute for Democracy and Electoral Assistance)

Many poor and middle-income democracies — like Nigeria, Croatia, Serbia, and Mongolia — restricted individual donations, but plenty of mature democracies — the UK, Spain, Germany, Italy, Sweden, Norway, Austria, Australia, New Zealand, etc. — did not, as of 2014. Some of those countries, like Italy, are infamously corrupt, but a number of them come out ahead of us on Transparency International's Corruptions Perceptions Index, the most-used quantitative measure of corruption in government. New Zealand even ties for first. Same story for caps on donations to political parties, which McCutcheon also left in place.

Some of this is because these countries also embrace other campaign limits — most notably public financing but also mandatory or subsidized media access for parties and candidates — that blunt the impact of having no contribution limits. A handful of countries, like the UK, also have spending caps. But many, notably Australia and Germany, adopt a model in which a near total lack of restrictions and caps on spending/contributions is paired with public financing and rigorous disclosure.