21 times Stephen Colbert has dropped his act and been himself

Share All sharing options for: 21 times Stephen Colbert has dropped his act and been himself

Tonight is the 1,447th and final episode of The Colbert Report. That also means the end of the right-wing cable blowhard character Stephen Colbert originated on The Daily Show and perfected on his own show. When he takes over The Late Show from David Letterman next year, Colbert will drop the shtick and just play himself.

And Colbert hasn't played himself very often. He's done a fair share of acting for series like Strangers With Candy and Harvey Birdman, Attorney at Law, and as a cast member in the sketch series The Dana Carvey Show and Exit 57, and he's had a few movie roles (Bewitched, The Love Guru, The Hobbit: The Desolation of Smaug). But even when he appeared as a guest on other talk shows, he occasionally stayed in character.

There have been a few exceptions, though. Here are a few moments where Colbert dropped the act and gave some clues to what he's going to be like as host of The Late Show:

1. Prepping John Kerry for an interview

Josh Marshall of Talking Points Memo managed to get a camera into Colbert's dressing room with the night's guest, then-Sen. John Kerry, in 2007. Colbert explained the shtick to Kerry: "You know I'm in character? And that I'm an idiot?" he asks. "I'm willfully ignorant of what we're going to talk about. So disabuse me of my ignorance."

2. Testifying before Congress on migrant workers

In 2010, Colbert was invited to testify before the House Judiciary Committee's subcommittee on immigration about his experience doing farm labor as part of the United Farm Workers's "Take Our Jobs" campaign. The union had volunteers try out migrant workers's jobs to observe first-hand how difficult the labor is. His actual statement was delivered in character, but he broke to answer Rep. Judy Chu (D-CA), who asked why Colbert chose this, of all issues, to work on. "I like talking about people who don't have any power," he answered. "Migrant workers suffer and have no rights."

Colbert's 2011 commencement speech at Northwestern — where he graduated in 1986 — was a rare comedic appearance when he explicitly was not playing his character. "As you have explained to your grandparents, my name is Stephen Colbert, but I also play a character on TV who is named Stephen Colbert, and I don't always know which of us has been invited someplace," he said. "Well, today, I'm fairly confident that I'm me, because I went to Northwestern and my character went to Dartmouth."

He also delivered a 2013 speech at the University of Virginia out of character, talking about his time at Hampden-Sydney College in Virginia (while his character was up in New Hampshire).

His 2006 speech at Knox College (coming one year after then-Sen. Barack Obama's famous commencement speech there) falls somewhere in between in and out-of-character. "My name is Stephen Colbert, but I actually play someone on television named Stephen Colbert, who looks like me, and who talks like me, but who says things with a straight face he doesn't mean," he begins. "And I'm not sure which one of us you invited to speak here today. So, with your indulgence, I'm just going to talk and I'm going to let you figure it out." Though he talks about his time at Northwestern (a tell-tale sign he's out of character), he also decries socialized medicine and unauthorized immigration, suggesting he's still at least somewhat playing the character.

Colbert has been on Meet the Press twice, first with Tim Russert in 2007 and then with David Gregory in 2012 (above). The Gregory interview is particularly interesting, as Colbert goes into his logic behind constructing The Colbert Report the way he does. "Jon [Stewart] does what's called pure deconstruction, where he picks apart what happened in the day's news and lays it out for you, like a cadaver," he explained. "But I falsely reconstruct the news. That's a different way of doing the same kind of job. If I'm doing it and something in the news is doing it, that real thing is probably bull."

His appearance with Russert (above) was less successful, partly because Colbert was more committed to doing shtick that time around and because Russert wasn't particularly inclined to play along.

Oprah Winfrey devoted an episode of her primetime, hourlong interview show, Oprah's Next Chapter (since renamed Oprah Prime) to Colbert. They covered how he formed his character, his relationship with his wife Evelyn McGee-Colbert (who appears), his early career, and his family in South Carolina (where the episode was filmed). Above, he discusses the death of his father and two brothers in a airplane crash when he was ten years old.

In 2011, Colbert appeared in a Broadway production of Stephen Sondheim's Company with Neil Patrick Harris, Patti LuPone, Christina Hendricks, and Martha Plimpton, and to promote it he appeared on NPR stalwart Fresh Air with Terry Gross. He explained to Gross why he didn't want to mention Company on the Report. "People could ascribe an insincerity to the things that I tout on the show," he explains. "And I didn't want to ascribe any insincerity to trying to go do this thing at Lincoln Center and — because I knew that it was — I was dealing with somebody else's delicate product, and I didn't want to invest it with my character's ego because it would just flavor what I was doing in a way that I don't think would be useful to the production."

In late 2012, Colbert sat down with Eric Spitznagel for a far-ranging, 6,500-word interview for Playboy. One of the interview's more interesting segments gets into how Colbert tries to prevent the cynicism of the news he's covering from seeping into his own life. "I believe that people, more often than not, act with the best possible intentions," he tells Spitznagel. "And when they don’t, that’s funny to me…You seem cynical because you’re always talking about that selfish behavior that’s dressed up as altruism. It doesn’t mean there isn’t altruism. It just means that it’s harder to make jokes about altruism." 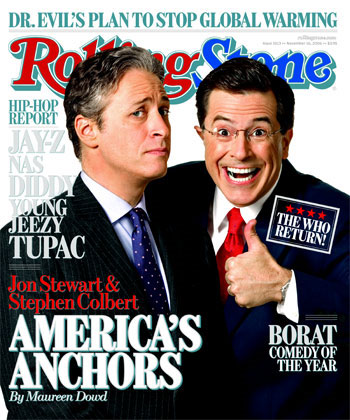 Colbert has given two out-of-character interviews to Rolling Stone, first to Maureen Dowd with Jon Stewart in 2006, and next with Neil Strauss in 2009. The 2006 interview is probably the more interesting of the two, not least because of Colbert's explanation of why he admires Richard Nixon. "Nixon was the last liberal president," he told Dowd. "He supported women's rights, the environment, ending the draft, youth involvement, and now he's the boogeyman? Kerry couldn't even run on that today."

Visit NBCNews.com for breaking news, world news, and news about the economy

Colbert also met up with David Gregory on The Today Show to talk about his children's book, I Am a Pole (And So Can You), and plays it pretty straight, or at least as straight as you can play it when promoting a book about a pole's voyage of self-discovery.

Colbert occasionally went out of character on other late-night shows. His visit to The Tonight Show with Jimmy Fallon (above) involved him telling a rather earnest story about going to a state dinner at the White House and attempting to speak French with French president François Hollande.

Colbert has "broken," in the sense of not being able to keep it together and not laugh, a few times on his show and The Daily Show, most notably in 2003, when he attempted to report on rumors that Prince Charles of the United Kingdom had had sex with another man. He ended up resorting to ridiculous innuendo and bursting out laughing while eating a banana. But it's rarer that he breaks and drops the character altogether. He did so very briefly last fall in a segment on Thanksgivukkah in which he ended up accidentally drawing a Hitler mustache on his face. "I can't believe I'm discussing Hanukkah and I drew a mustache right there," he said, in all earnestness.

Update: He also broke character on the show when his mother, Lorna Colbert, passed away last spring, and introduced the show with a beautiful remembrance of her:

Before the Report premiered, Colbert appeared as a guest on the show he'll now be helming and, as is often the case when he does late night, he stayed out of character, discussing his family and a sailing trip.

He's appeared on the show twelve times in total, most recently late last year. Despite arriving dressed in British Victorian garb and wielding a cockney accent, he mostly played it straight, telling Letterman about the time his nine-year-old went bungee jumping, saying, "I have no regrets!" before falling into a ravine.

Update - Timothy Rowe points out on Facebook that Colbert broke character for the above event, a discussion with physicist Neil deGrasse Tyson at Montclair Kimberley Academy in Montclair, New Jersey.

Update - Slate's Forrest Wickman notes that Colbert appeared as himself at a live taping of the magazine's "Political Gabfest" podcast, of which he is a weekly listener.

Update - Colbert appeared on the very first episode of CNN's The Lead with Jake Tapper in 2013 to promote his sister Elizabeth's campaign for Congress in South Carolina. He also told the story of how he first met Tapper, when they were both following Howard Dean during the 2004 Democratic presidential primary.

Thanks to Mediaite's Matt Wilstein for pointing out a few of these. If you know of other occasions when Colbert has appeared as himself, email me atdylan@vox.com.