Venezuela is in the throes of a massive popular uprising caused by an economic crisis. Russia's deeply corrupt autocracy is threatening to invade another part of Ukraine. Iran's authoritarian government is keeping the murderous Syrian regime alive, and oil-rich Saudi Arabia is safely funding extremists around the world.

You might find this idea surprising. Oil is one of the most valuable commodities in the world. Shouldn't oil make a country rich, and therefore better off?

But after decades of study, and hundreds of statistical regressions, political scientists and economists have overwhelmingly found the same result. Large amounts of oil wealth correlate with three bad things: autocracy, corruption, and civil war. But there are some revealing, and surprising, details in how that happens. Here's what we know about the "oil curse," as it's called, and how it works.

Study after study has found that, while discovering big oil deposits doesn't turn democratic countries with a lot of oil like Norway and Canada authoritarian, authoritarian countries are more likely to stay that way if they've got a ton of oil. Of all the bad things that oil does for countries, this is probably the worst and most robustly demonstrated. Think about how long the Saudi monarchy has stuck around, or Russia's failed attempt to transition to democracy in the 1990s.

"No country with high levels of oil and gas income has successfully become democratic since 1960," writes Michael Ross, one of the premier scholars of the oil curse. As you can see in his graph on the right, countries that make a lot of money from oil per capita (the bottom-right group of dots) have spent approximately zero time under democratic rule in the past 50 years. 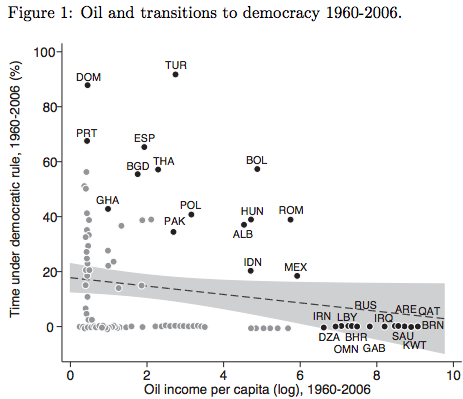 The main reason for the link between oil and authoritarianism, according to Ross and others, is straightforward: oil gives dictatorships money to buy off their citizens, so they don't have to democratize. Authoritarian governments tend to nationalize their oil industries, which gives them exclusive control over a resource the rest of the world desperately needs. This allows them to extract what economists call "rents," money that you get because you have control over a resource rather then because of anything that you actually do to said resource.

Ironically, these short-term payments may actually make citizens poorer in the long run. Economists have found strong evidence that oil wealth tends to slow economic growth in these countries, possibly because authoritarian leaders don't feel the need to build an actually-productive private sector that keeps their citizens employed and fed. So the government pockets most of the oil cash, and the citizens get enough to not complain about getting robbed.

When the government is getting a ton of free cash, government employees are going to scramble to siphon it off. It's just human nature. The influx of money to the government from the oil sector gives politicians and bureaucrats the opportunity, means, and motive to go on the take.

A study of West African countries shows how this works. Pedro Vicente, an economist at Trinity College Dublin, compared São Tomé and Príncipe, a low income country that discovered oil deposits in the late 90s, to Cape Verde, a very similar West African country that didn't strike black gold. Post-oil, Vicente found significant evidence of increased corruption around the São Toméan government, including in the electoral, health care, police, and legal sectors. But the Cape Verde government didn't get worse over the same period of time.

Interestingly, oil appears to breed corruption mostly in non-democratic countries with state-owned oil industries. So the same sort of authoritarian countries that use oil to buy off their citizens are also the most likely to be corrupt.

Oil makes civil war more likely (but not when there's a ton of it, or when it's offshore)

In oil-rich countries, control over oil gives you power and money. People are willing to kill for those things, so armed factions are more likely to form to contest who gets access to that oil.

At first blush, the logic here appears to contradict the idea that oil helps authoritarian governments. But the effect of oil depends, very critically, on the amount. The basic finding, first discovered by Oxford's Paul Collier and Anke Hoeffler and confirmed in subsequent research, is that neither a little oil nor a lot of oil makes civil war more likely. If a country only has a little oil, it's not worth fighting over; if it has a lot, like Saudi Arabia, the government is usually rich enough to head off potential opponents.

LIBYA IS A TEXTBOOK EXAMPLE OF OIL'S CIVIL WAR PROBLEM

The problem is when you have a medium amount of oil. The classic case here is Nigeria, who's 1967 civil war was sparked in part by ethnic groups competing over the proceeds of a recent oil boom.

One other important thing: the statistics tell us that only on-shore oil wealth correlates with civil wars. That makes sense, as it's hard to physically contest oil deposits out in the water with cheap ground troops. 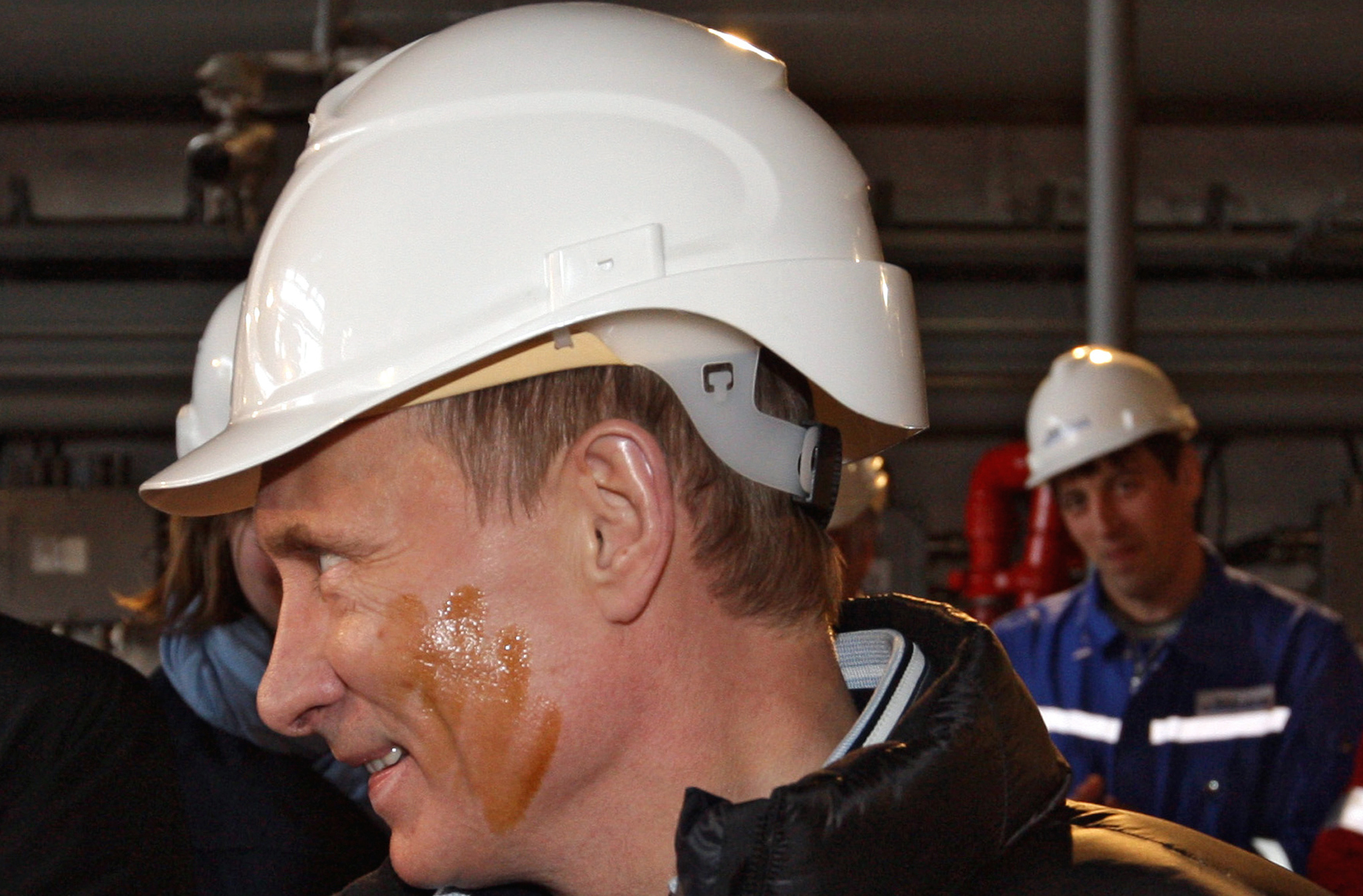 The Putin government built its deep base of support among the Russian population lots of ways, but a big has been by using proceeds from the state-run oil company, Gazprom. There was a big oil boom in the mid-2000s, which allowed Putin to build a pretty extensive welfare and patronage network throughout Russia. This distribution of cash helped make his brand of authoritarianism more popular than the chaotic pseudo-democracy Russians lived under in the immediate post-Soviet years.

But a big chunk of the money from Russia's oil boom went to corrupt Russian officials and oligarchs. Russia's level of economic growth is anemic at best, and its infrastructure is in catastrophically bad shape. Russia's huge oil deposits helps explain both why Putin won't fix those two things any time soon and why a lot of his citizens won't make him.

For years, scholars have had a lot of difficulty explaining why Middle Eastern authoritarian countries like Saudi Arabia have been so stable. They identified the oil curse as part of the explanation.

The Arab Spring was the greatest challenge to Middle Eastern authoritarianism, but you'll note that the none of the super oil-wealthy Gulf monarchies (Saudi Arabia, Kuwait, Qatar, the United Arab Emirates, and Oman) were toppled. With the exception of Bahrain, none of those countries even experienced major protest movements. Out of the four states that were nearly or totally toppled, three of those (Egypt, Tunisia, and Syria) are not oil-rich.

The one oil-rich country that got hit hard by the Arab Spring, Libya, is a textbook example of oil's civil war problem. Libya has a lot of oil, but not Saudi or Qatari levels. It descended into civil war in February 2011 and, since dictator Moammer Qaddafi's death in August of that year, has remained chaotic. One of the key reasons has been continued struggle over the country's oil reserves. Different militias claim different oil wells and the government, lacking access to oil revenue, doesn't have the cash to stop them.

The oil curse explains why Venezuela is only now boiling over into protest, despite years of problems

Venezuela's ongoing street protests against President Nicholas Maduro show no sign of stopping. Yet, there's a puzzle surrounding them: why did they break out just now, when Maduro has simply continued the populist policies that predecessor Hugo Chavez ran for years?

The oil curse has your answer. Chavez used the mid-2000s boom in oil prices (the same high prices Putin exploited) to finance fairly effective anti-poverty and redistribution programs. This gave him room to freely ignore Venezuela's underlying economic problems, including rapid inflation, growing debt, and rising violent crime, because he had earned the loyalty of many citizens with oil money.

Eventually, Venezuela's significant oil reserves were no longer making enough cash to keep pace with the structural flaws in the economy. These flaws had always been there, but petroleum allowed the Venezuelan government to ignore them for much longer than it should have.