Indian political leader Narendra Modi, who looks overwhelmingly likely to win India's ongoing elections, makes many foreign policy hands nervous due to his embrace of Hindu Nationalist ideology that raises both regional stability and domestic human rights concerns. But in the international business community, feelings are quite different. Modi's BJP party isn't just the party of religious nationalism in India, it's the party of business. And optimism about a BJP win has been powering the Indian stock market to new highs this spring. The value of India's currency, which plunged last year, has been rising in 2014 again thanks to Modi-mania.

Can Modi fix India's economy? Will he?

How much trouble is the Indian economy in?

Economic issues seem to be the main factor driving voters to Modi and the BJP. Many Indians believe that Modi's background as a leader in the state of Gujarat makes him well qualified to fix the country's economic woes, and there's a sense that the incumbent Congress Party is flailing rather than getting the job done. Americans accustomed to hearing vague talk about surging growth in India may be surprised to learn that India's economic performance over the past couple of years has actually been quite poor. China's growth rate has slowed down from its fastest years, but China is still growing much faster than any rich country — showing clear signs of continuing to "catch up" to the developed world.

India, by contrast, is poorer than China and has a faster-growing population than China's. So, in principle, India should be able to grow even faster than China. Back in 2010, it looked like maybe they would pull it off. But in 2012 and 2013, Indian growth slowed sharply: 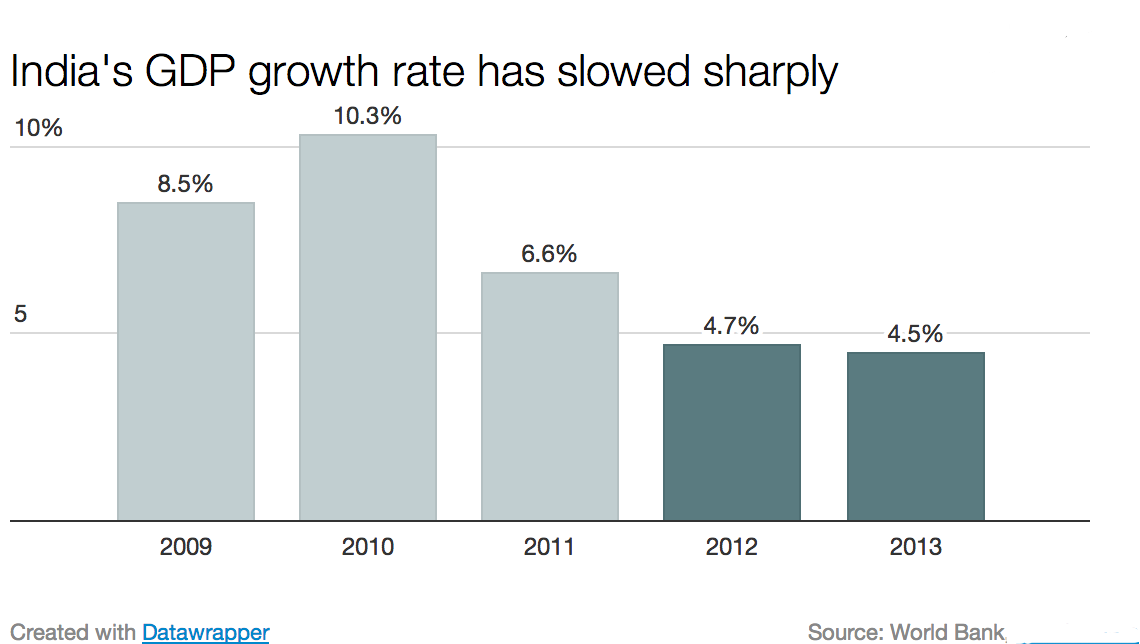 So even as China has slowed down a bit, the gap between China and India is actually growing. And, unlike in the United States, Europe, or Japan, inflation has been pretty high in India recently. 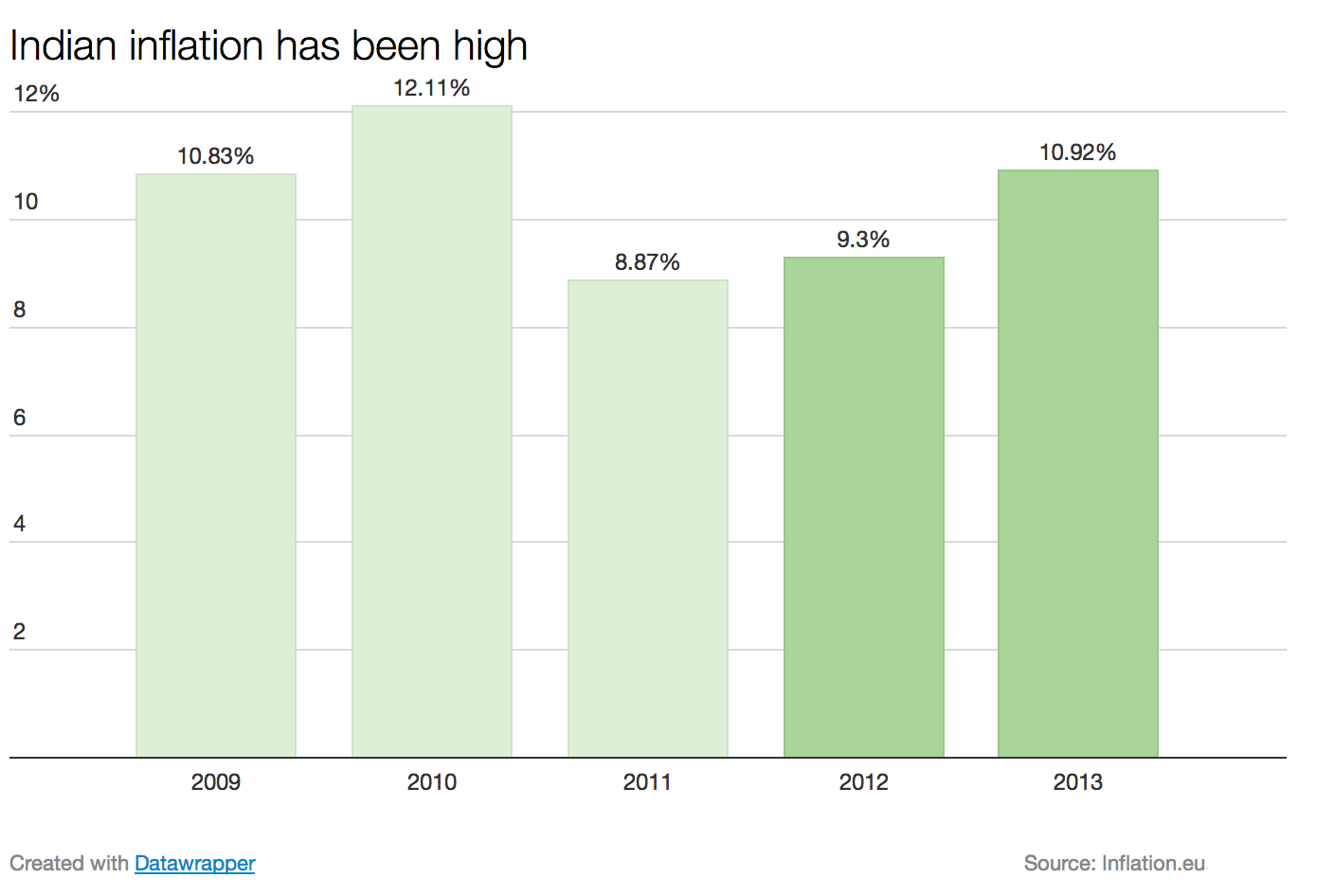 That means the India economy isn't slowing down due to a lack of demand. It's slowing down because the Indian economy lacks the capacity to translate that demand into more production of goods and services. Instead a lot of demand is just showing up as higher prices.

That means India needs some form of "structural" or "supply-side" reforms to grow faster. Enthusiasm about Modi and the Modi agenda is, in effect, enthusiasm that Modi will be able to pull this off.

What does India need to do?

Broadly speaking, India's problem is that its world-famous information technology outsourcing industry isn't nearly big enough relative to the country's enormous population. There just aren't 1.2 billion jobs to be done in this sector. Even if there were, the vast majority of Indians aren't qualified for them. The country needs new industries that can employ less-skilled workers — factories, in other words — and it needs higher productivity in its agricultural sector.

On the manufacturing side, India faces two huge challenges. One is that the permitting process for doing things is extremely cumbersome. India ranks 134th on the World Bank's Ease of Doing Business rankings. By contrast, Vietnam, at a very similar GDP per capita, is way up at 99th.

The other challenge is infrastructure. According to a recent PriceWaterhouseCooper report (PDF), the average speed of a bus or truck on India's roads is 30 to 40 kph, or about 19 to 25 mph. So if you did manage to get a factory built, workers couldn't get there and the goods couldn't get out to port quickly enough to be economically competitive. That said, even if your products did make it to port that wouldn't do you any good since "average time for clearance at our ports is several days, whereas it's several hours in many other countries."

Will Modi fix this?

It is difficult to say. India's infrastructure problems are so obvious and so egregious that everybody claims to want to address them. The stated economic platforms of the BJP and the incumbent Congress Party are not particularly distinct. To a great extent, the issues around both permitting and infrastructure relate to corruption, and for obvious reason nobody runs on a pro-corruption platform or have big ideological debates about whether or not corruption is desirable.

The main difference is that Congress has been in power for a while so it tends to take the blame for the status quo. Modi's supporters say he's the man to get the job done, and point to his record running the state of Gujarat as an example of his leadership and economic stewardship (there is, naturally, some disagreement as to whether this adds up). Broadly speaking, the sense is that Congress has failed and it's time for a change.

An additional factor is that despite the lack of sharp, explicit disagreements, many financially successful members of the Indian diaspora are BJP fans and are looking for Modi to bring a Thatcher-style revolution in Indian economic policy. This helps build enthusiasm for Modi in the broader global financial community. A skeptical Goldman Sachs analysis notes that the permitting and infrastructure problems are largely in the hands of state government so it may not make any difference.

On one issue, however, the supposedly right-wing and free market BJP has positioned itself as the more pro-regulation party. One of the most contentious recent initiatives of the Congress Party has been legislative reforms to allow more foreign companies to open supermarkets and department stores in India. This is known as the multi-brand retail sector in Indian regulatory parlance (in other words, shops that carry more than one brand of goods) and it's proven extremely controversial due to the lobbying strength of Indian retailers.

Congress hopes that bringing stores like Walmart and Tesco to India will accomplish two things. One is a reduction of consumer prices, curbing inflation. The other is a somewhat vague hope that foreign expertise in supply chain management will improve the productivity of India's agricultural sector. Higher rural earnings would be a boon to India's poor, and would essentially buy time to keep working on the infrastructure issues that hold manufacturing back.

The BJP has squarely aligned aligned itself with the domestic retail lobby and says it wants to curtail foreign investment in retail stores.

If Modi and the BJP really can curb corruption and cronyism, they'll be doing India's population an enormous favor. This is a tremendous problem and as long as it lingers it tends to not only harm ordinary Indians but serves to somewhat discredit the idea of democracy across Asia. But this is easier said than done. That said, Congress clearly hasn't done the job.

On concrete economic policy issues there does not seem to be a sharp disagreement. BJP has more market-oriented rhetoric focused on middle class aspirations while Congress is more the party of the poor. But in at least one important arena, Congress has pressed deregulation while Modi is on the other side.