9 charts that explain the history of global wealth

Share All sharing options for: 9 charts that explain the history of global wealth

Thomas Piketty's book Capital in the 21st Century advances an important and provocative argument about the future of the world economy. You can read all about it here in our short guide to the book. But the argument is built upon the most impressive set of data ever assembled about the history of wealth around the world, and that data tells many stories beyond the main narrative argument of the book. Here we present nine charts drawn from the book that illustrate the history of the global economy.

1) The fall and rise of Asia 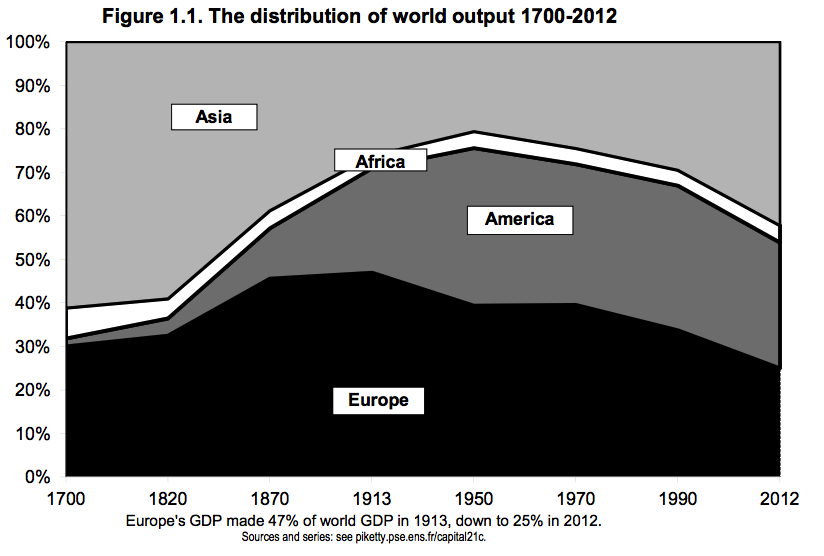 300 years ago, a majority of the world's economic output was located on the Asian continent. But with the coming of the Industrial Revolution, Europe's share of the global economy increased substantially. As European settled the Western Hemisphere and brought industrial economics with them, the Americas rose as well. Asia's share of world output shrunk massively, despite the continent's enormous population. But over the past 20-30 years, Asia's staged a massive comeback. Its share of world output isn't yet back to where it was in 1714 but it's getting close.

2) The return of inequality in Britain 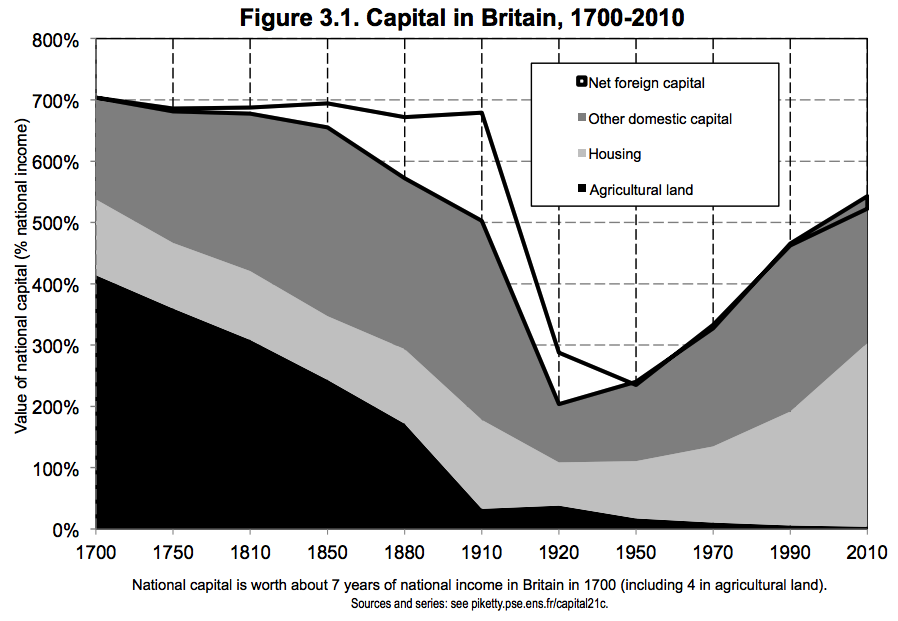 This chart shows the extent and nature of British wealth as compared to British income. In the 18th and 19th centuries, wealth was massive relative to income and much of it took the form of agricultural land. Over the course of the 19th century, the relative value of agricultural land shrunk and was largely replaced by "net foreign capital," i.e. British ownership of foreign assets during the heyday of the British Empire. Then came the world wars. The foreign capital was liquidated to pay for the wars, and domestic capital shrunk. Circa 1950 the power of accumulated wealth versus ongoing income reached a low point. But since 1970, wealth has made a comeback, powered considerably by an increase in the value of houses—primarily urban and suburban land in the London area.

3) The return of inequality in Germany 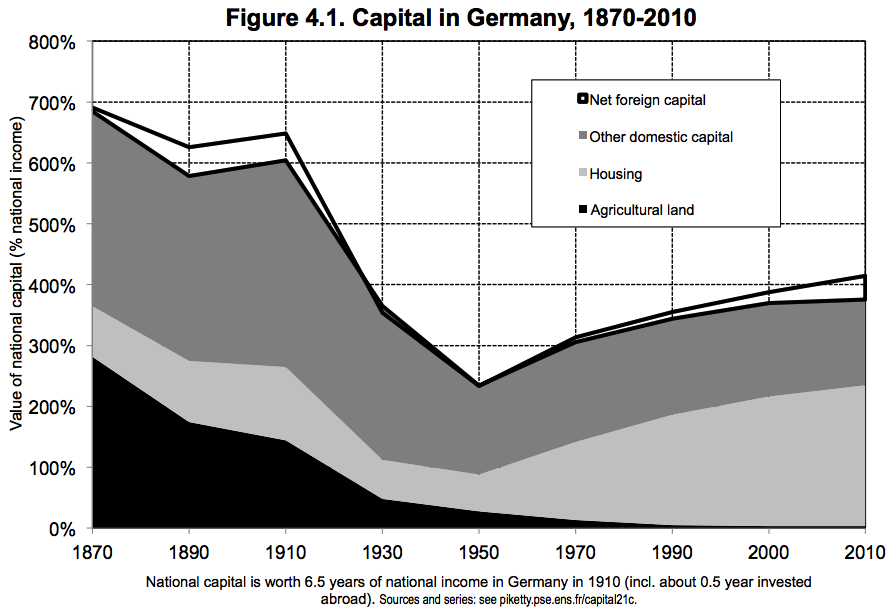 The story of German wealth is different from the British story in almost every detail. "Net foreign capital," meaning German ownership of foreign assets, was not very important in the pre-World War I era. Instead wealth was driven overwhelmingly by "other domestic capital," meaning the value of German industrial and commercial enterprises. German wealth was, of course, massively destroyed by the world wars. But it's rebounded strongly since its low point. Interesting, despite Germany's vaunted industrial capabilities the rebound has not been driven by a large increase in domestic capital. Instead the key sectors are domestic housing and ownership of foreign assets. 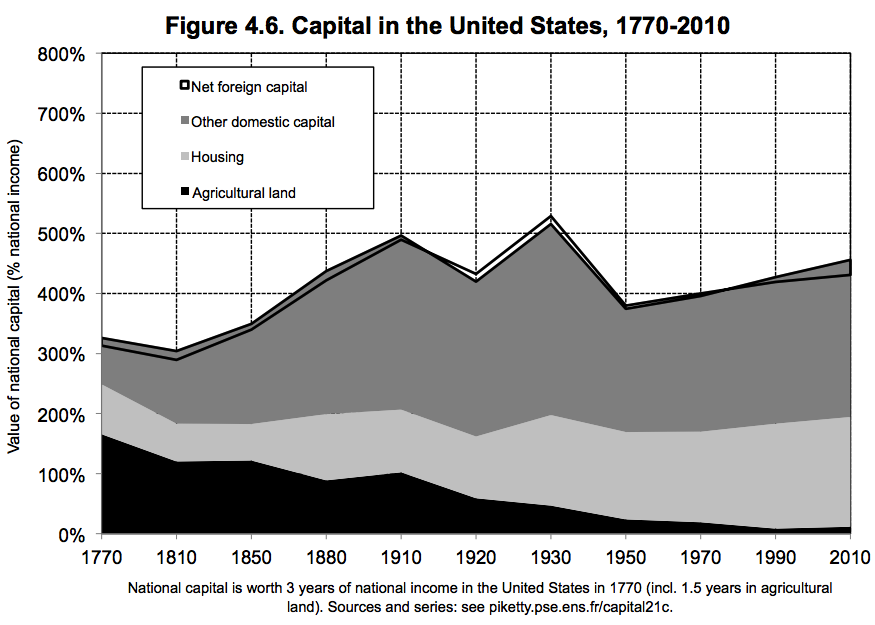 American economic history looks very different from Britain or Germany. We apparently enjoyed an edenic early period prior to 1880 in which accumulated wealth was small relative to ongoing income. This was a world in which a few years of hard work could, it seems, easily help you stack up against the might of the already wealthy. Many of America's enduring narratives about itself clearly owe a debt to this early period, even though the more recent trajectory has been different.

5) The fall of the slaveholding aristocracy 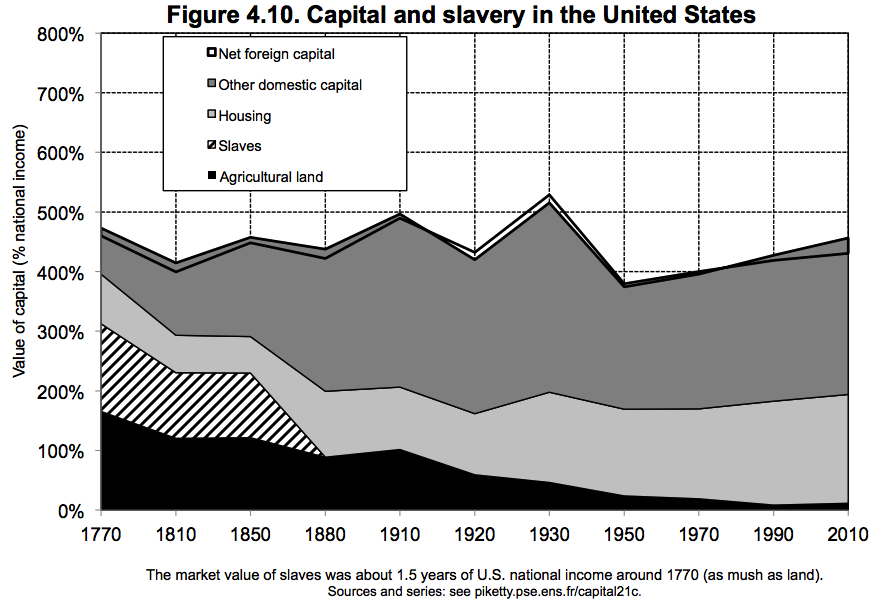 The image of early 19th century America has a relatively egalitarian landscape turns out to neglect something important: slavery. Millions of people of African ancestry were held in bondage, making the idea of hard work as the ticket to success a joke. And possession of their labor was extremely valuable. As this chart illustrates, slave wealth was slightly more valuable than all the agricultural land in the country put together. It was also more valuable than all the factories and railroads and canals combined. In a world of relatively abundant land and high wages, owning black people was the key to wealth. And the process of emancipation was possibly the single greatest expropriation of wealth in human history.

6) The varieties of capitalism 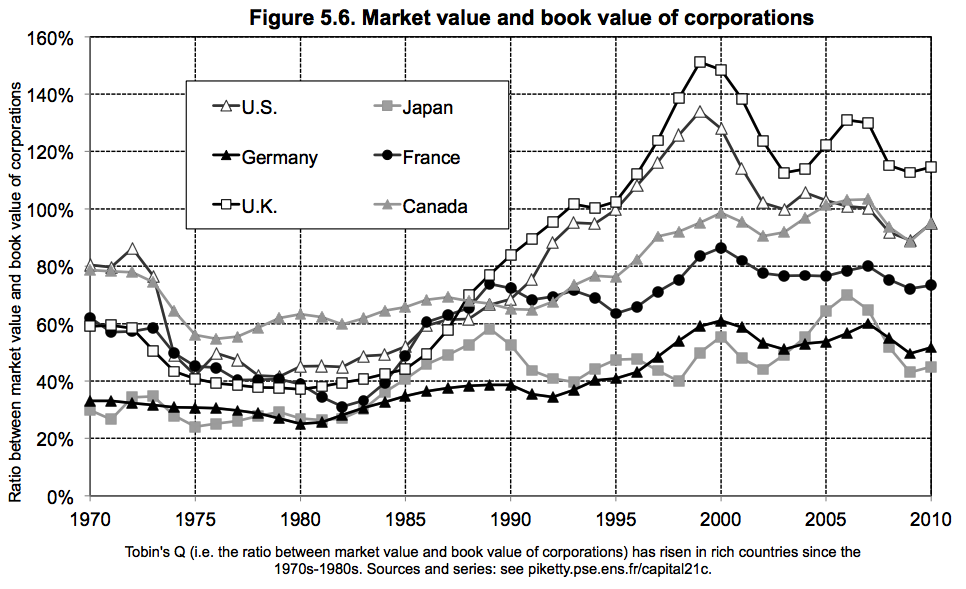 This chart is a little difficult to understand, but it's very deep. For several different countries, it compares the "market value" of their companies (i.e., what it would cost to buy all the shares of their stock) to the "book value" of the companies (i.e., the value of the factories, patents, offices, etc. that the companies own). This lets us see that in the United States, Canada, and the United Kingdom share prices are high relative to the book value of companies. The Anglophone countries have shareholder-friendly legal systems in which the owners of stock control enterprises. In Germany, stocks are much less valuable because the legal system gives much more weight to the interests of employees and other stakeholders. France is an intermediate case. These different conceptions of capitalism coexist with vast sums of wealth at stake in the difference between them.

7) The really really rich are different from you and me 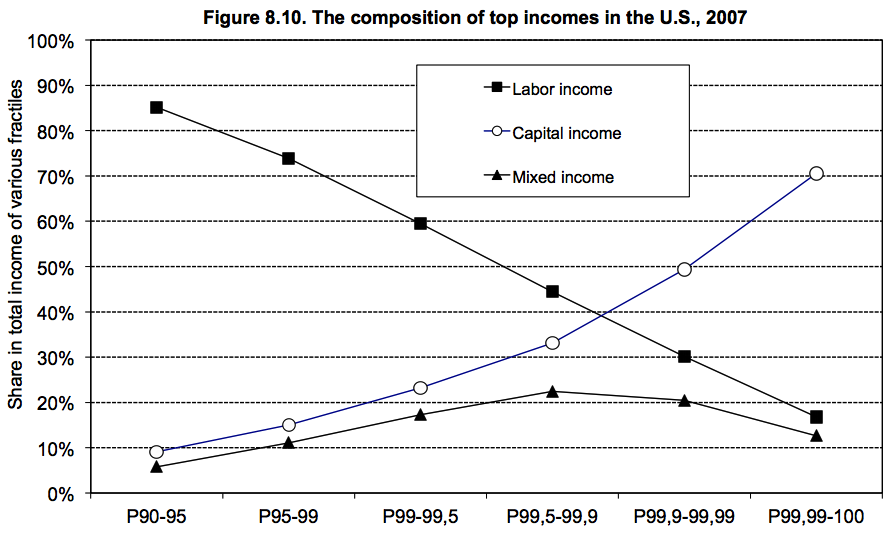 This chart shows that the vast majority of people in the top 10 percent of the American income distribution earn a living the way most of us do — they work for it. But among the top 0.1 percent and the top 0.01 percent things are different. Labor income — wages and salaries — are a distinct minority of total earnings. The truly rich don't get their money by working for high pay. They get their money as a consequence of their pre-existing wealth.

8) Wealth is much more unequal than income 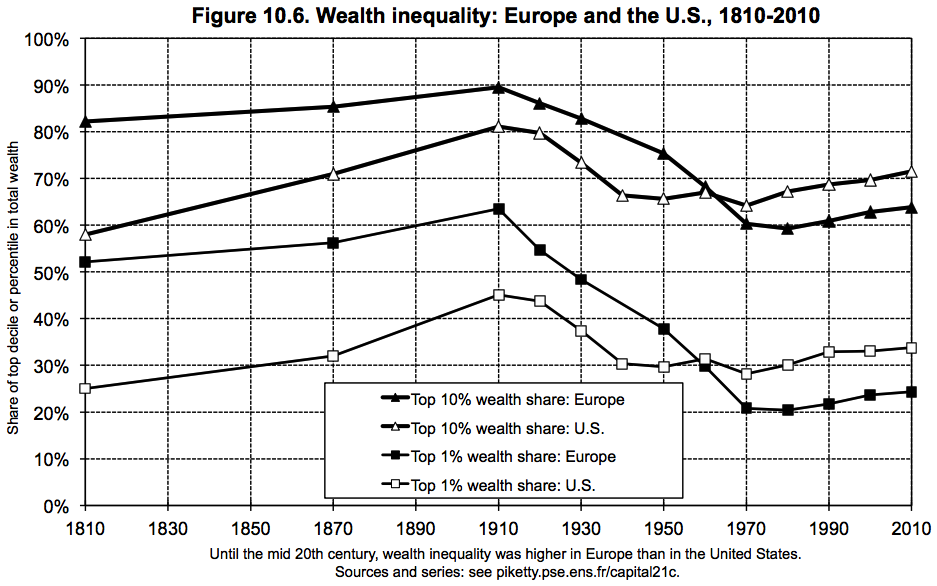 You hear a lot about income inequality, but as this chart makes clear wealth inequality is much more severe. In the United States, just 1 percent of the population owns about 35 percent of all the wealth. Even in relatively egalitarian Europe, the top 1 percent owns around 25 percent of the wealth. In both continents, the top 10 percent owns over half the wealth. Near the bottom of the spectrum, wealth is typically negative as people have more in debt (whether because of student loans, credit cards, or underwater mortgages) than they have in assets. 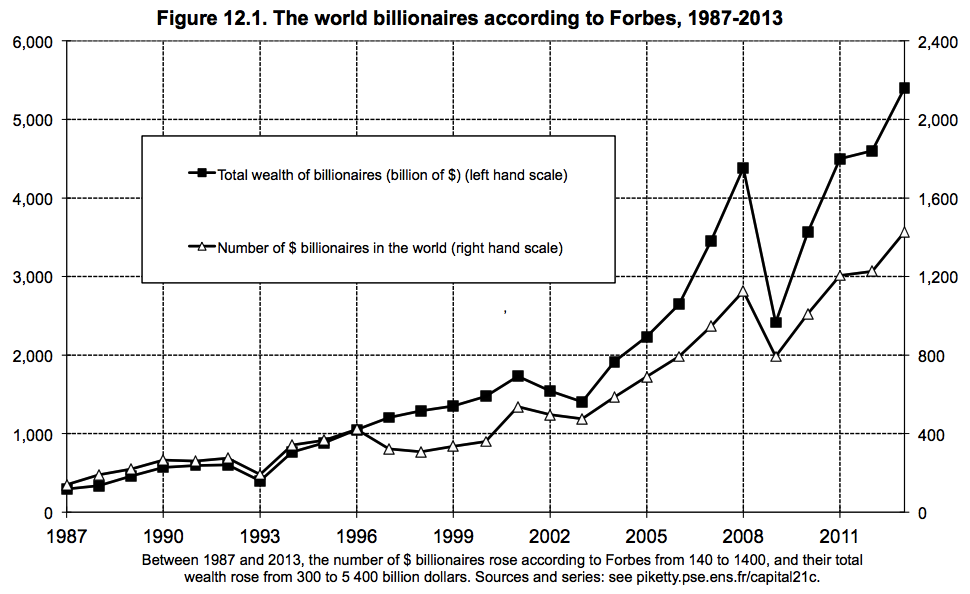 We are living through a golden age of billionaires. In 1996 there were about 400 billionaires. That number has more than tripled. But the total wealth under the control of billionaires has grown even faster — over five-fold in less than two decades. The trend reflects both growing inequality in rich countries, and growing prosperity in China and other relatively poor ones. The point here is that not only is wealth held unequally, the inequality appears to be growing fractally with the very richest of the rich growing richer at the fastest pace.