Obamacare succeeded for one simple reason: it's horrible to be uninsured

Share All sharing options for: Obamacare succeeded for one simple reason: it's horrible to be uninsured

But the political conversation over Obamacare was driven almost entirely by people who had, and knew they would be able to keep, their health insurance. It was filled with a lot of assumptions, theories, and speculations about what people who didn't have good insurance, or any insurance, would do. And after Obamacare's disastrous launch, the theory took hold that these people wouldn't find this untested program worth the trouble. It was the permanently insured speculating about the uninsured and the barely insured – and, unsurprisingly, they got it wrong.

It was hard to sign up for Obamacare. It's worse to be uninsured.

Back in December, when the web site's woes were fresh in everyone's mind, I made a prediction that sounded strange even to me: Obamacare might still hit its 7 million enrollees. The reason I made that prediction was I'd been talking to the uninsured who'd been spending hours or days or weeks trying to get through the web site. They were frustrated and they were angry. But not one of them had given up.

I asked pollsters Mike Perry and Tresa Undem, who specialized in surveying the uninsured, whether they had found anyone who'd been deterred by the unusable web site and overloaded call centers. Not even one person, they said. The persistence was amazing.

"If you live in my world, you have done or read study after study how much the uninsured want health insurance and why they want it," Kaiser Family Foundation president Drew Altman says. "So you just had to believe they would give it a serious try." 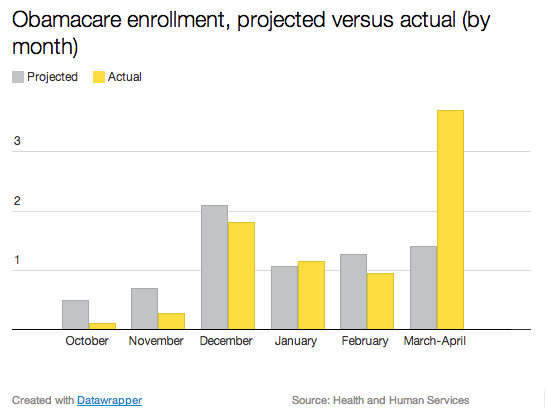 People did give it a serious try. And when the site failed them, they waited a few months and gave it another serious try. In March and April, 3.7 million people signed up for coverage, three times as many as the White House had expected.

Over 217,000 people signed up for Obamacare on the very last day March, more than double all sign-ups in the entire month of October.

Specific states saw similar figures, some more dramatic: In the District of Columbia, for example, one-quarter of all people who signed up did so in the last week of March.

The sign-up surge appears to have continued into April, after the Obama administration gave shoppers who started the enrollment process by the end of March two additional weeks to finish. California announced Thursday that 205,000 people signed up for coverage between April 1 and 15. That accounts for 15 percent of the 1.3 million people who signed up for coverage there.

"For a lot of people health insurance is far from their favorite thing in life," Kaiser Family Foundation president Drew Altman says. "I think the huge volume at the very end is just as much about how Americans do stuff and procrastinate, as it is about the health care law."

This doesn't come as a total surprise; about a quarter of Americans file their taxes to the Internal Revenue Service in the two weeks before the deadline. Massachusetts saw a spike(although not as big) in enrollment during its law's first enrollment period, in 2007. 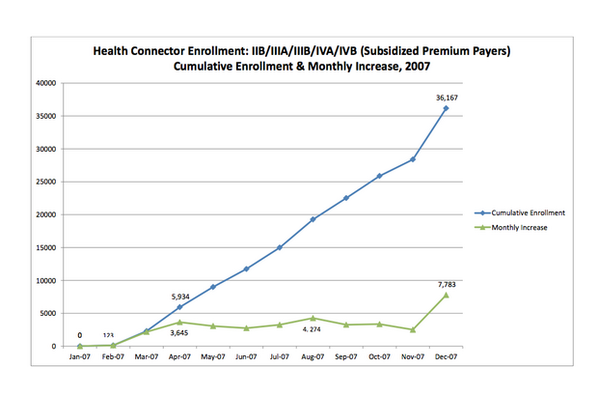 But even knowing that deadlines tend to motivate action, nobody expected how much action would happen in March.

It made more sense though if you spent much time talking to people about health insurance. They don't like trying to sign up for it. It's complex and it's intimidating and it's expensive. But buying insurance isn't nearly as bad as being uninsured.

There were many obstacles standing in between health law shoppers and buying insurance coverage. This was partially technical failures that could have been avoided. But there was also the fact that most people don't understand health insurance, or have much experience shopping for it. People have trouble defining key insurance terms, things like co-insurance and deductible.

"We made enrollment so much harder than it needed to be," says Mike Perry, a founder of polling firm PerryUndem, which has conducted numerous focus group with uninsured Americans. "There was a knowledge gap, there were glitches, most people didn't know about financial assistance or navigators. We had so many hurdles and yet they persevered."

They persevered because it's horrible to be uninsured. When Perry and his co-founder Tresa Undem conducted focus groups, they didn't hear a lot of "I give up" when the uninsured ran into obstacles. Instead, it was a lot more of "I'll try again later."

The health-care law beat its mark because it was selling something 8 million people want to buy.

On a policy level, beating the 7 million number isn't especially meaningful for the Affordable Care Act. It's a political yardstick that doesn't measure how many healthy people, for example, are signing up, a crucial factor for determining whether premiums go up next year. There's nothing magical about beating 7 million enrollees.

But even if the total number of Obamacare sign-ups isn't especially important, the groundswell of enrollments is: it shows that the fundamental premise of the law -- that people want health insurance -- is correct. They're willing to battle through a crummy website and a complicated law and endless political controversy in that process, too, if it means coming out with a health insurance policy at the end.

"That's not a new idea that people want health insurance," Perry says. "But that they would stick through so much hassle still amazes us."