The United States of America is not known as a land of top-notch passenger railroading. Much of this has to do with a fundamental lack of investment. Unlike Japan, France, Spain, or China the country has not committed to building modern high-speed rail infrastructure. But the operational aspects of American passenger rail are also curiously primitive. In other words, we don't use the infrastructure that we do have in a remotely efficient way or apply international best practices to railroad management.

Consider the curious case of boarding a train at Amtrak's most popular stations.

In general, once one knows on which track a train will arrive, one goes to the adjacent platform and waits. When the train arrives, the doors will open and people who need to disembark will get off. Then you go through the open door and hop on the train. This process is seen at train stations around the world, including intercity trains everywhere from Brussels to Shanghai and mass transit trains such as the 1, 2, 3, A, C, and E New York City Subway lines at Penn Station and WMATA's Red Line at Union Station in Washington, DC. 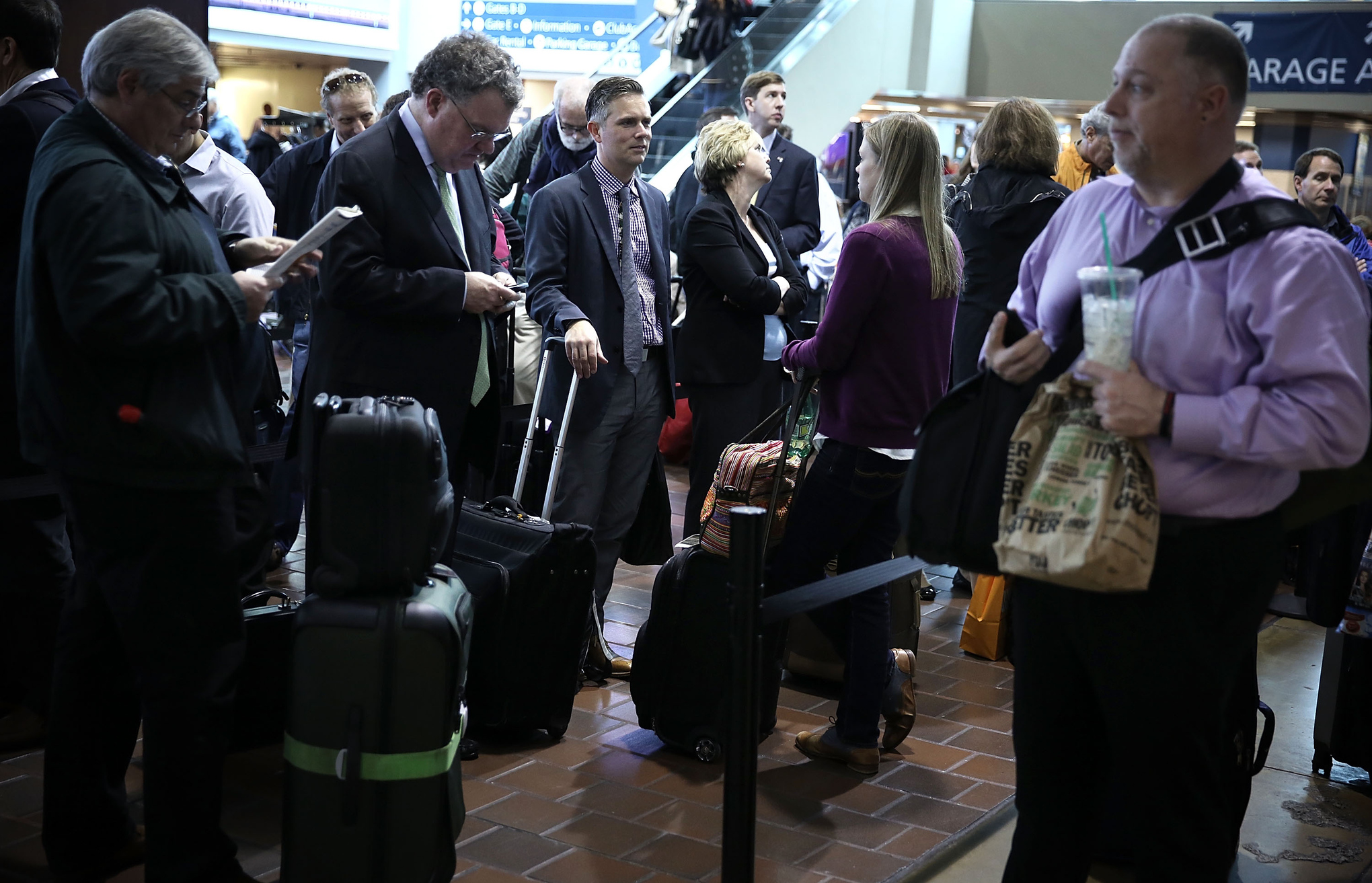 2) How does Amtrak think you board a train?

This makes sense, since that's how one boards a train.

However, at larger stations, Amtrak chooses to ignore 150 years of accumulated human wisdom about boarding trains. So at Boston's South Station, New York's Penn Station, Philadelphia's 30th Street Station, and Washington's Union Station, people wishing to board intercity trains must go through a more elaborate process. You wait for your track to be called and then need to queue up — with each passenger presenting a ticket to an Amtrak staff member before you are allowed onto a platform. This is roughly how one boards an airplane in all countries, but it is not normally how one boards a train. 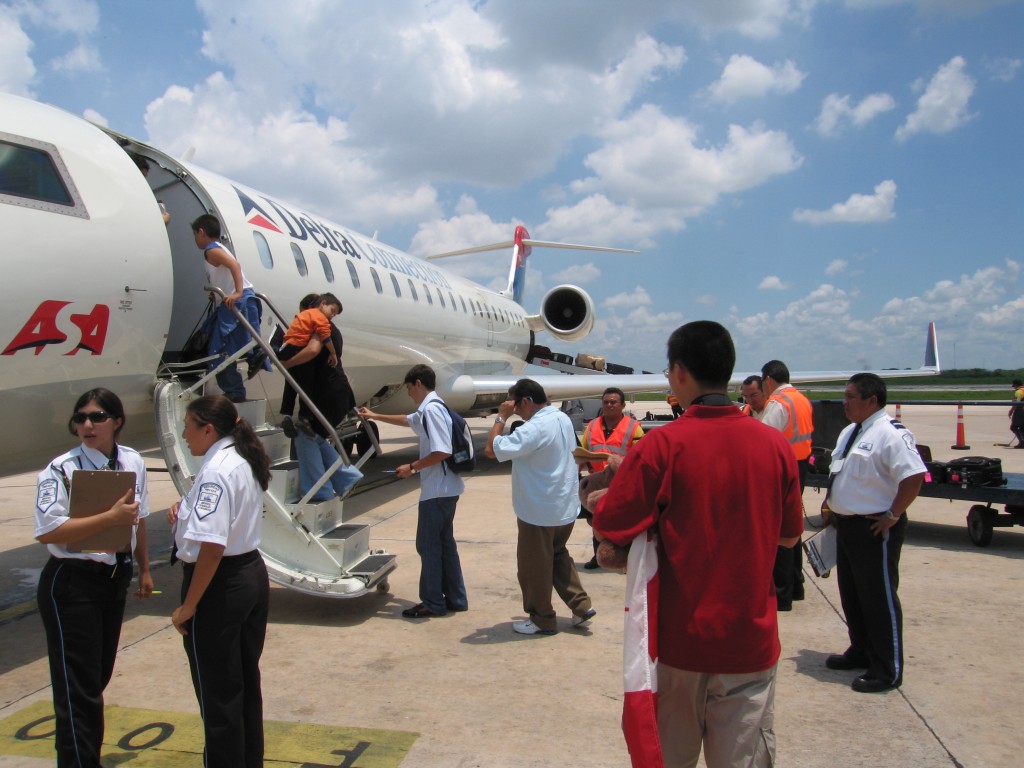 3) Why is standard boarding procedure different for planes and trains?

Airplanes typically only have one door, which makes single-file queuing unavoidable. What's more, trains typically use either turnstiles at station entrances (for mass transit) or on-board conductor checks (for intercity trains) to verify payment. This makes a ticket inspection queue unnecessary, while the multiple doors factor makes an inspection queue burdensome. 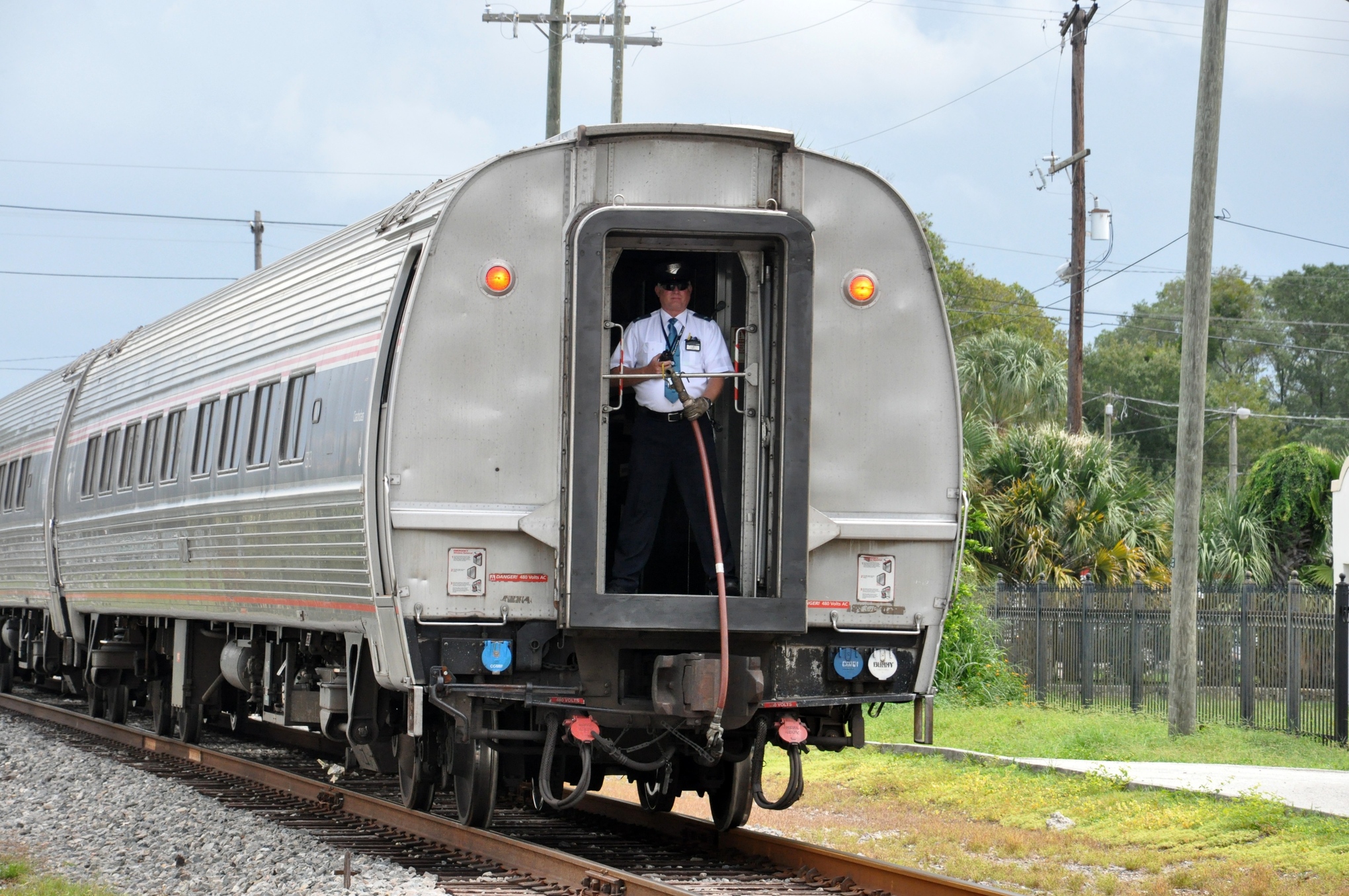 4) Is Amtrak unaware of the differences between planes and trains?

They seem to be aware. As noted, Amtrak employs standard train boarding methods at many stations, offering a clear indication that they are aware that trains have multiple doors. What's more, Amtrak employs conductors who check tickets on trains, indicating that they are aware that there is no need for pre-boarding payment verification. The queuing is limited to a handful of stations that happen to be located in major cities and thus happen to account for a very large share of total boardings. 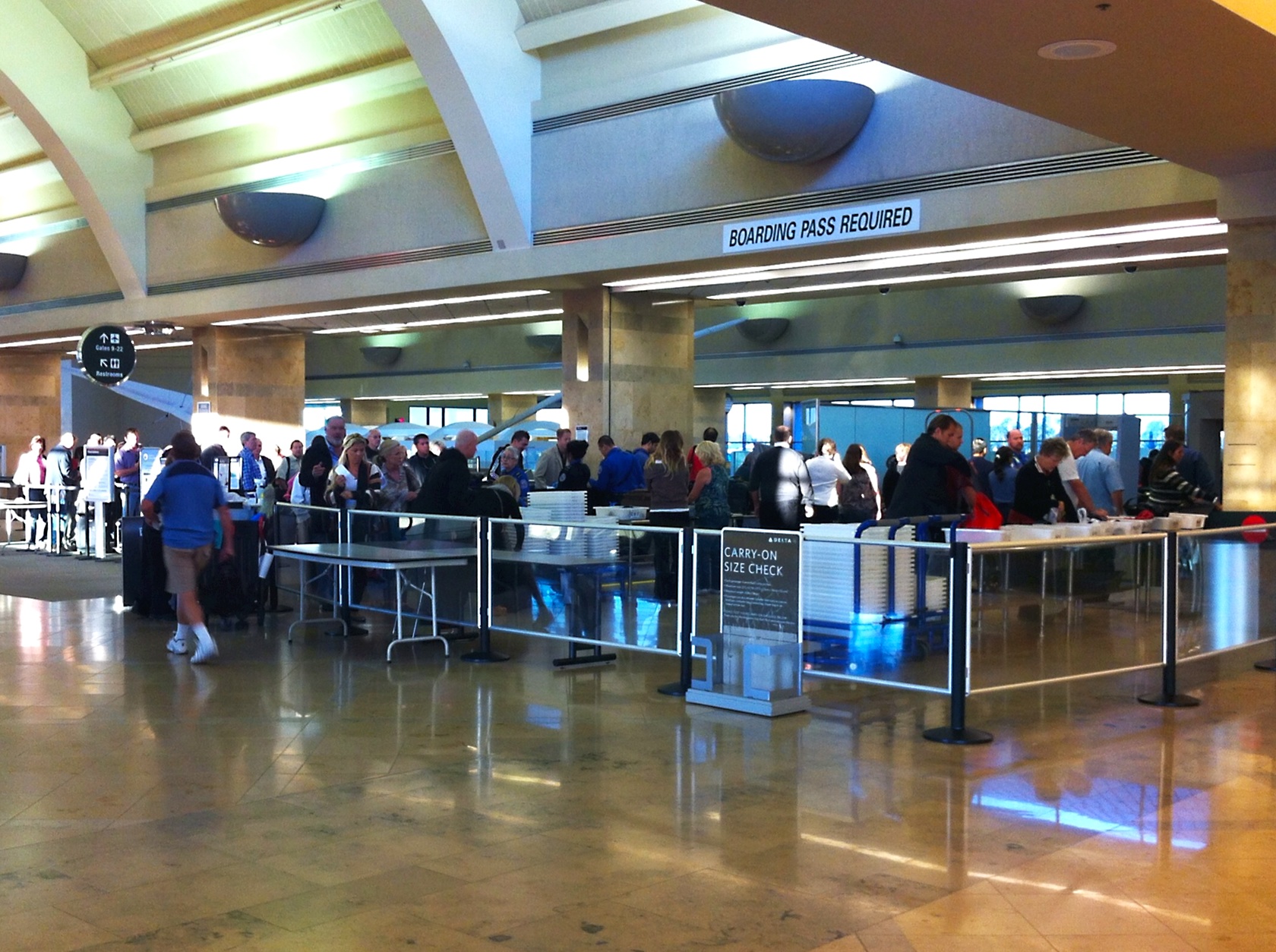 5) Why does Amtrak think the queuing system is a good idea?

Amtrak officials have represented to me that the ticket check is a necessary security measure. They have not been able to point to a specific legal directive instructing them to employ this method, but they gesture in the direction of airport security procedures. 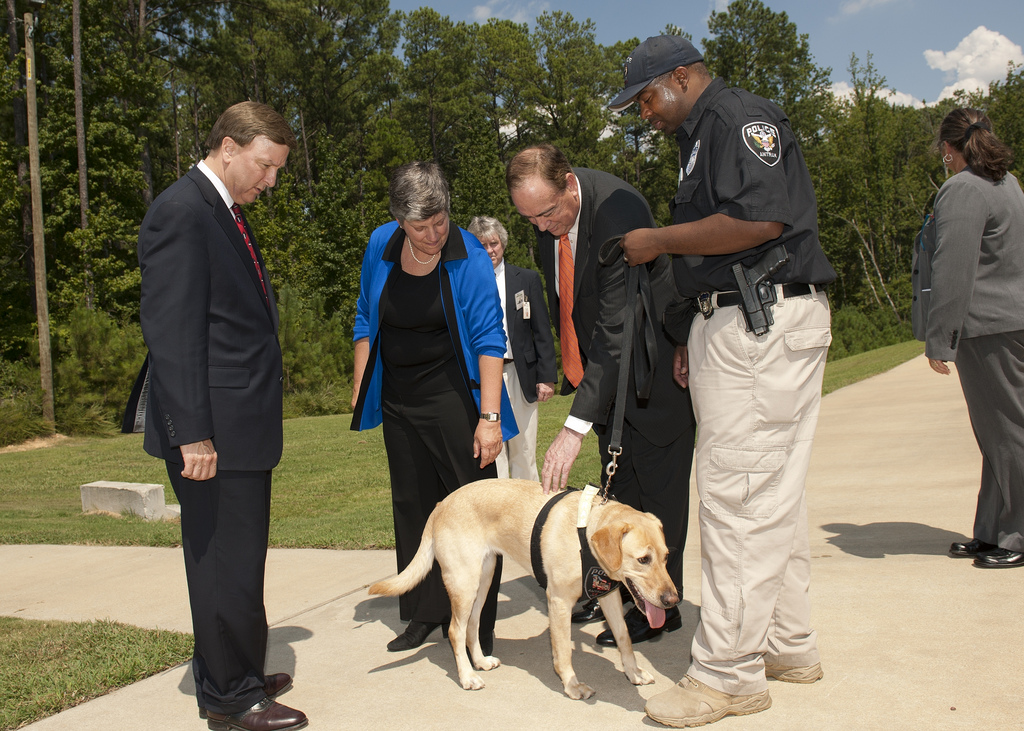 6) Why would verifying that a passenger has a ticket help prevent a terrorist attack?

Unclear. All of the 9/11 hijackers were bona fide ticketed passengers. Purchasing a train ticket is a trivial task compared to assembling a bomb or obtaining a visa to enter the United States. 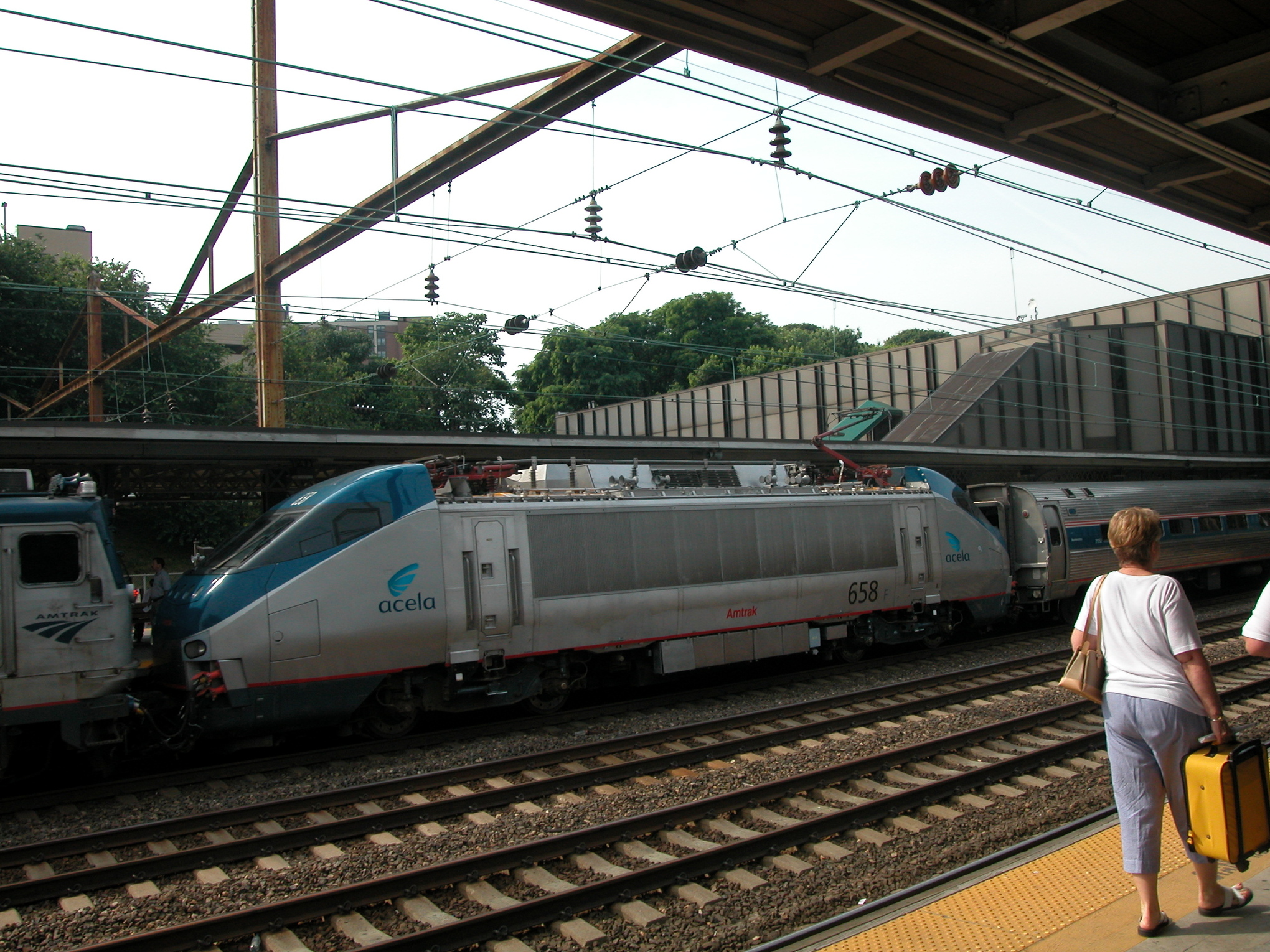 7) Couldn't terrorists just board at one of the smaller stations where they don't do ticket checks?

Yes. Even if the ticket checking did have security value, the fact of the matter is that a malefactor could always board the train in Newark or Stamford and evade the system. It inconveniences law-abiding travelers but offers no meaningful impediment to a determined villain. 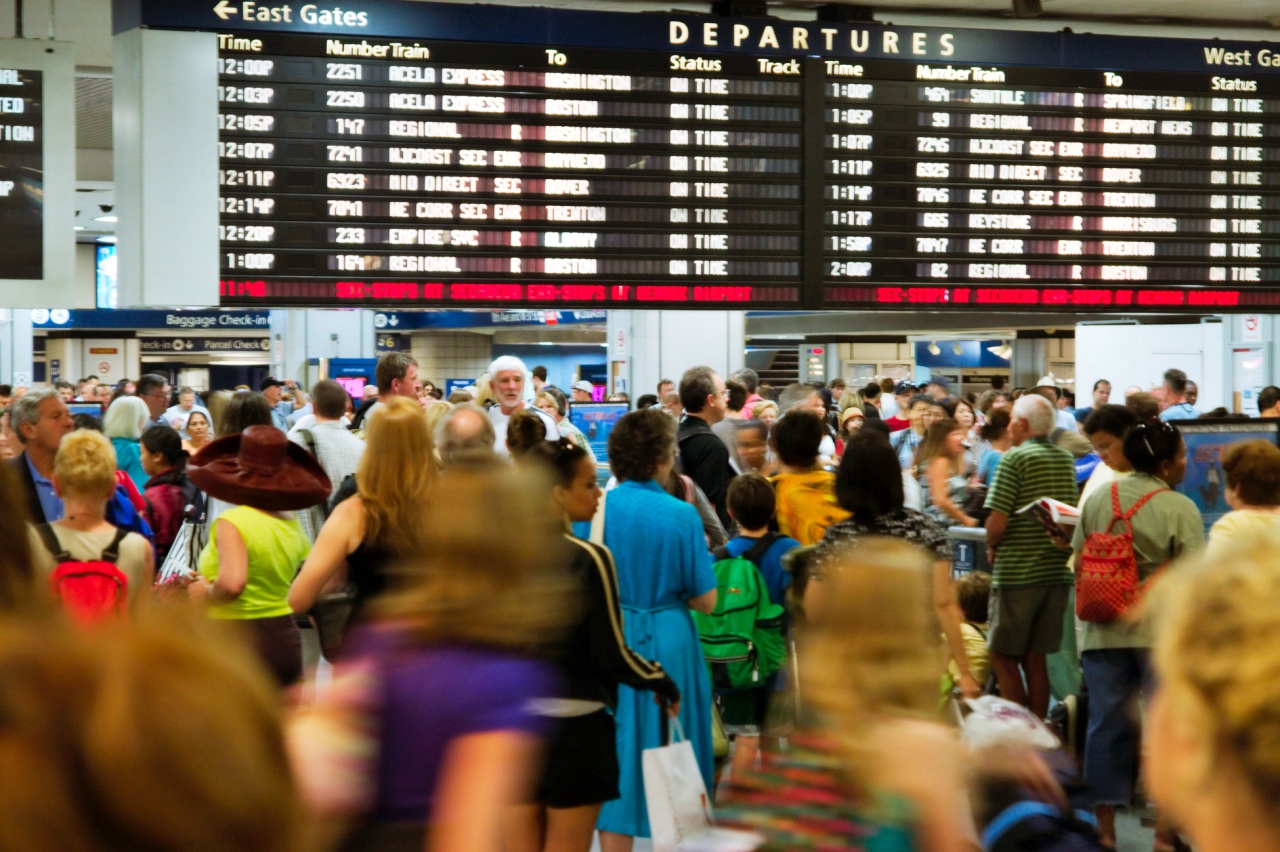 8) How can I avoid this fiasco at Penn Station?

At New York's Penn Station one can avoid the queuing madness by adopting the following procedure: go to the main waiting room. Observe the escalators located in the middle of the room near the main information board. Descend the escalator.

You will find yourself in a mezzanine area whose primary function is boarding New Jersey Transit commuter trains. Wait by the monitors near the bottom of the escalator and watch for your train's track to be announced. When the track is announced, you will be able to proceed directly from the mezzanine to the appropriate platform without going through the queue or the ticket check. 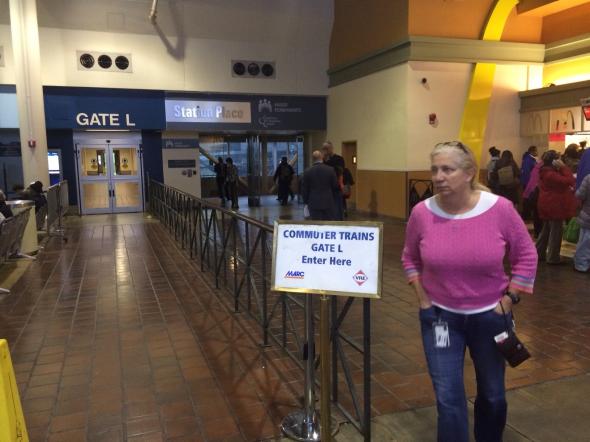 9) How can I avoid this fiasco at Union Station?

Oftentimes you can't. But if you are on a northbound Amtrak Regional (or sometimes Vermonter) train that originated in Virginia and boards from one of the low platforms, you may be in luck. Note the track number, but instead of proceeding to the assigned gate, go to Gate L. Once passing through the Gate L doors, you'll go upstairs to a small waiting area for Virginia Rail Express commuter trains. That waiting area should contain stairs that descend to the platforms that serve tracks that run through to Virginia. Pick the appropriate staircase, head to your platform, and wait for your train. 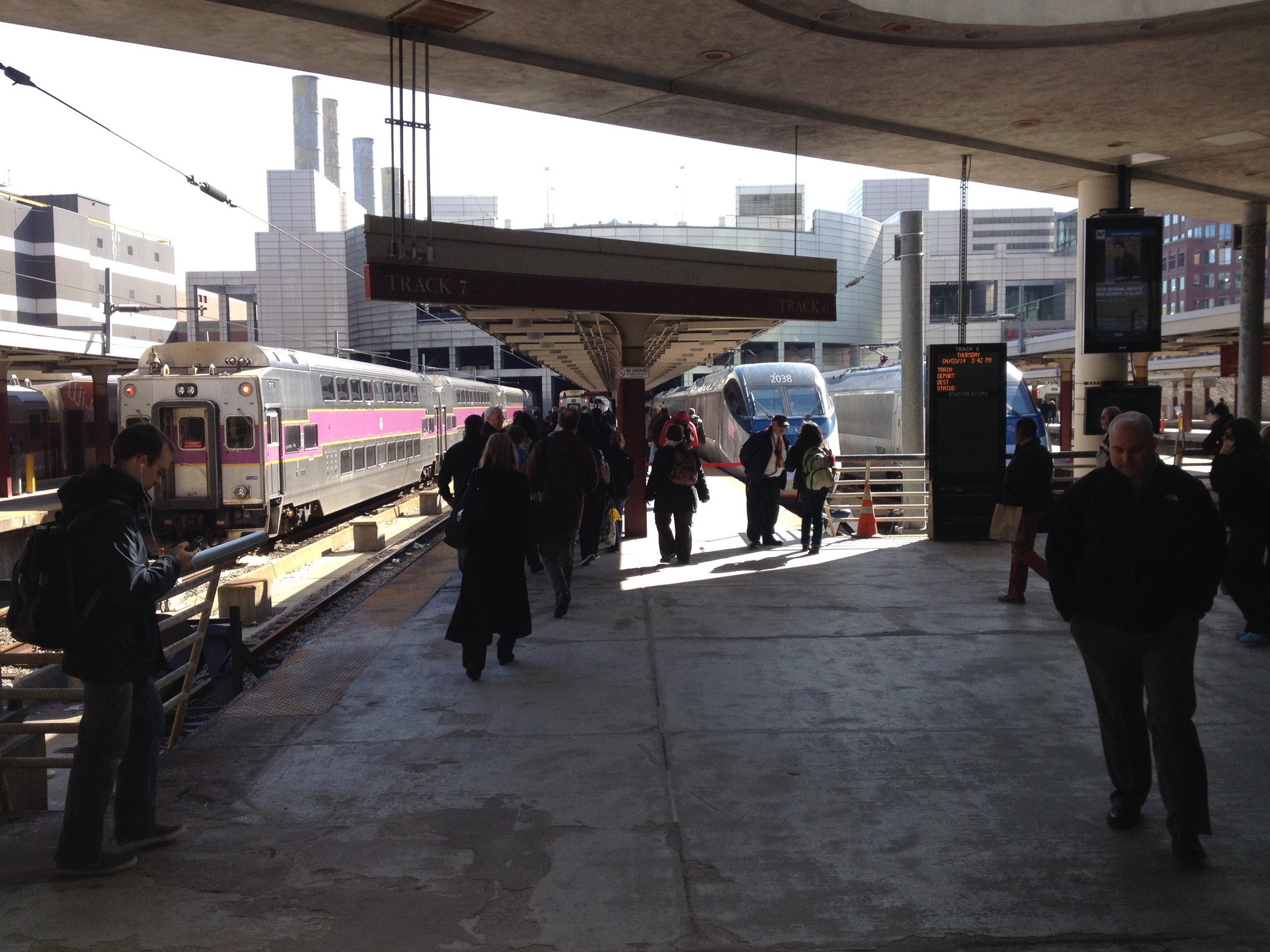 10) How can I avoid this fiasco at South Station?

At South Station, it is common for Amtrak trains to dwell on tracks that are adjacent to platforms that also serve MBTA commuter rail trains (see above). In this circumstance, Amtrak will cordon off half the platform to facilitate pointless queueing while allowing free entry to the other half of the platform so the commuter trains can operate like normal trains. Simply stick to the left as if you plan to board the commuter train, and then dart quickly over to the intercity train. 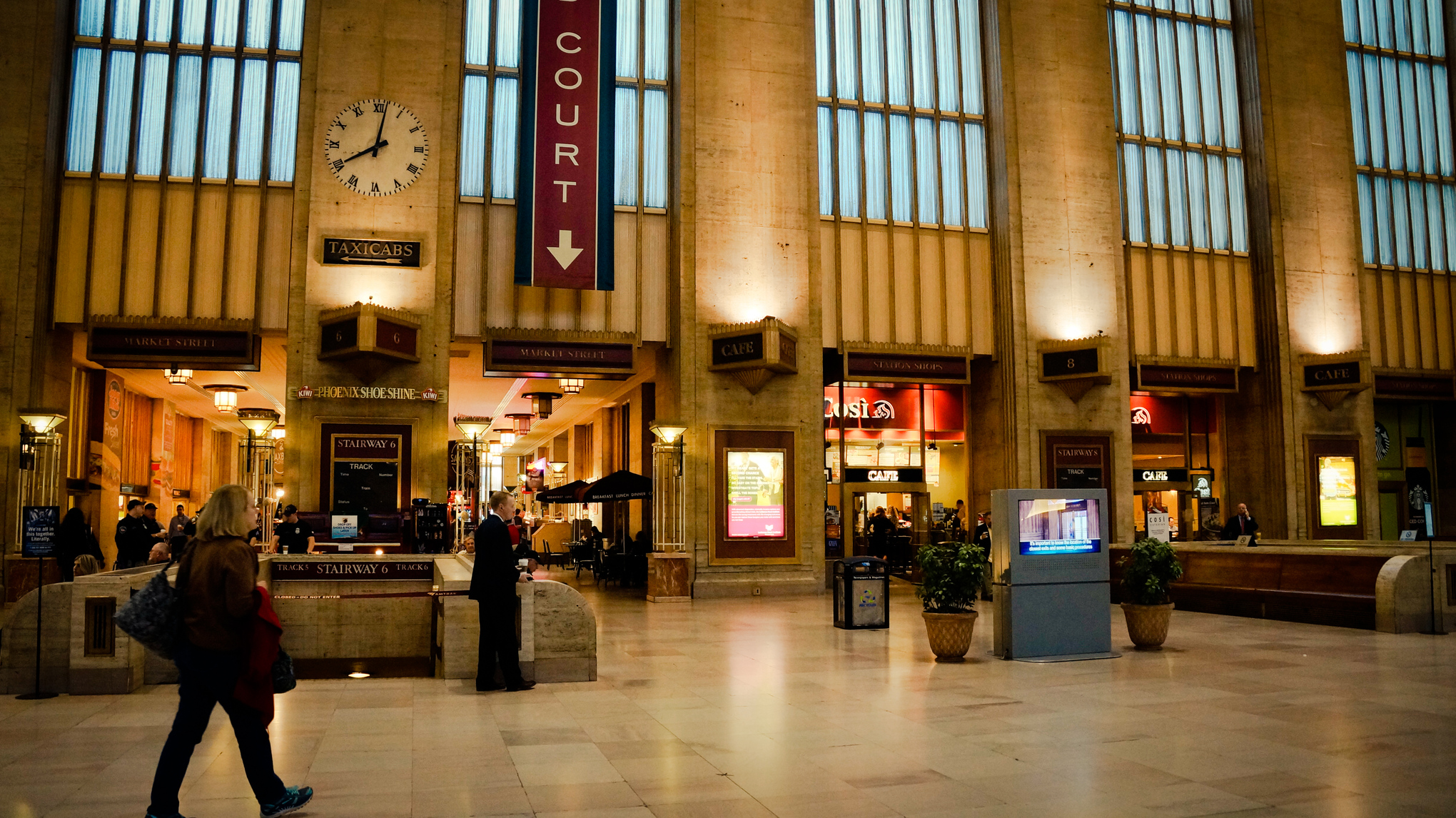 11) How can I avoid this fiasco at 30th Street Station?

Two helpful Philadelphia tips in my inbox, both from readers who prefer to remain anonymous:

The life-hack for avoiding the queue at 30th street station is using the elevator. You need the assistance of an amtrak employee to operate the elevator but I was commuting between NYC and Philadelphia 3 times a semester for my entire college career and they were always willing to take me down. I used this technique at homecoming this year.

The staircase opposite your gate is almost always open and leads to the same track. Go down that, and you beat the line. Sometimes they close it off, so it doesn't always work. But most of the time you are golden!

12) Aren't you going to ruin it for everyone by getting Amtrak to shut the Penn Station trick down?

It is certainly possible that Amtrak is going to ruin it for everyone by shutting down these entry points. But there's another outcome: Amtrak could reconsider the boarding procedure across the board. The personnel currently employed doing pointless ticket checks could be reassigned to work at the ticket or information desks and improve service across the board. Better rail transportation in America is possible, but it will only become a reality if American rail operators adopt best practices.

The better way to board an airplane