The Border Patrol has a big problem with excessive force

Share All sharing options for: The Border Patrol has a big problem with excessive force

The US Border Patrol has a problem. And the face of that problem is Esteban Manzanares.

Manzanares, a Border Patrol agent, was on duty along the Rio Grande in March when he came across a Honduran woman and two girls who had crossed the river illegally. Instead of apprehending them, he sexually assaulted the woman and her 14-year-old daughter, slashed the mother's wrists, and tried to break the teenager's neck. Then he abducted the other daughter and tied her up in his home before returning to finish his shift.

By the time the FBI was on his trail, Manzanares had killed himself. But the incident called attention to abuse and violence among Border Patrol agents at the worst possible time for the agency. 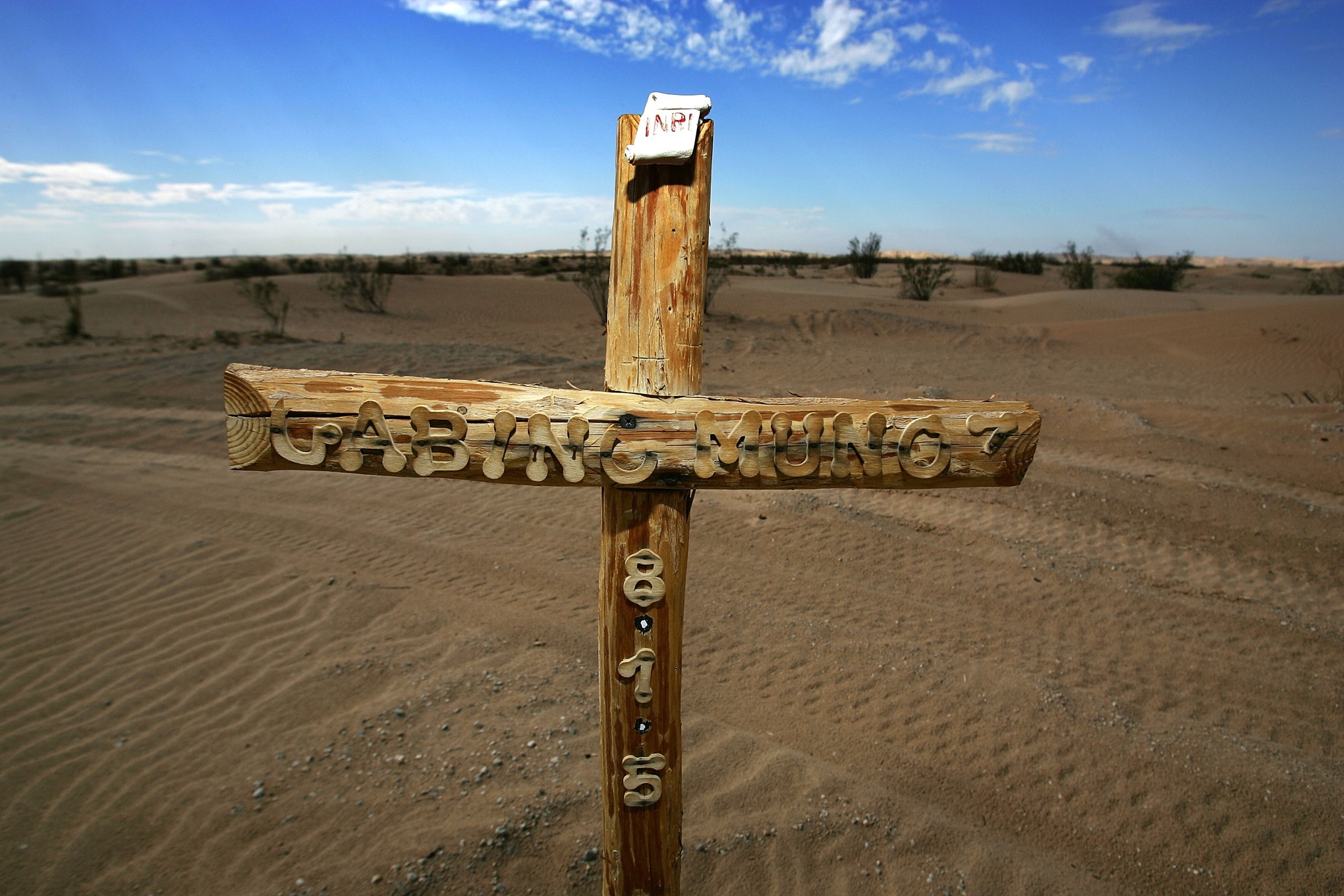 A memorial for an immigrant who died crossing the border. David McNew/Getty

the full, leaked report showed what officials who oversee border patrol had been trying to hide

A few weeks earlier, the press had gotten hold of the unredacted version of an independent report conducted last year on shooting incidents involving Border Patrol agents. The government had released a censored version last fall, but the leaked, full report showed what the officials who oversee Border Patrol had been trying to hide. There were cases of agents stepping into the path of cars trying to escape custody in order to justify shooting at them, and cases of agents firing across the border at Mexicans who were throwing rocks.

The resulting public outcry forced the Border Patrol to issue a few new directives to its agents. But the policy tweaks couldn't assuage the worry that has slowly been building among residents of both sides of the border for years. How often do Border Patrol agents escalate situations or initiate violence? And what is the agency doing about it?

Misconduct among Border Patrol agents, especially on the southwestern border, has become a more pressing concern in the last several years simply because there are so many more agents.

US Customs and Border Protection, the agency that oversees the Border Patrol, was ordered by Congress to put more boots on the ground on the southwest border — both at road crossings to check people entering the country legally (those are called "ports of entry," and are operated by the agency directly) and along the border between those spots, to catch people entering illegally. The latter is Border Patrol's job.

From 2005-2012, the number of Border Patrol agents on the US-Mexico border increased by over two-thirds: 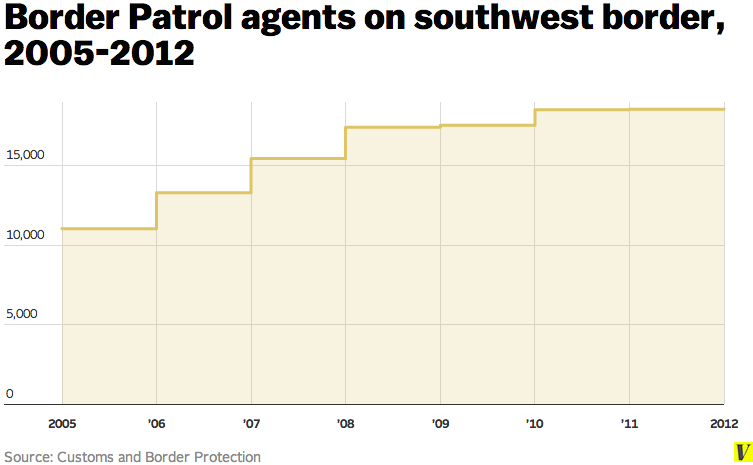 And that hiring spree wasn't accompanied by more funds for employee oversight. With limited resources, Customs and Border Protection focused on preventing corruption among border guards and keeping up with a Congressional mandate to issue polygraph tests to all new hires, not monitoring agents' use of violence.

an unarmed teenager in Nogales, named Jose Antonio Elena Rodriguez, was shot 10 times by agents firing through the border fence

The good news is that corruption hasn't become a systemic problem. There have been a couple of cases, but the rate of agents being reported for corruption hasn't increased at all throughout the hiring surge. (Among other things, the Border Patrol's policy of stationing agents at least 100 miles from their home appears to have helped keep corruption low.)

But while their agency minders weren't looking, the Border Patrol has developed an excessive-force problem. The Arizona Republic found that at least 42 people were killed by Border Patrol agents since 2005. In 2010, a man named Anastasio Hernandez Rojas died in Border Patrol custody after being tased. In 2012, an unarmed teenager in Nogales, named Jose Antonio Elena Rodriguez, was shot 10 times by agents firing through the border fence. After a PBS documentary on the Rojas death, including cellphone video footage of his tasing, emerged in 2012, Sen. Bob Menendez (D-NJ) asked the Department of Homeland Security to investigate. He wanted to know how the Border Patrol's use-of-force policy was being implemented — and what happened to agents who used excessive force.

At the time, Border Patrol didn't actually have a category in its internal reporting system for use-of-force incidents. It didn't seem to be a big concern. So government inspectors had to make some educated guesses, and ultimately identified 1,187 "possible" excessive force incidents between 2007 and 2012, including 136 involving a fired weapon. At the same time, an outside group, the Police Executive Research Forum, conducted an external review of 67 shooting incidents over the same period, 19 of which resulted in death. That was the review that was published in redacted form, along with the government's report, in September. 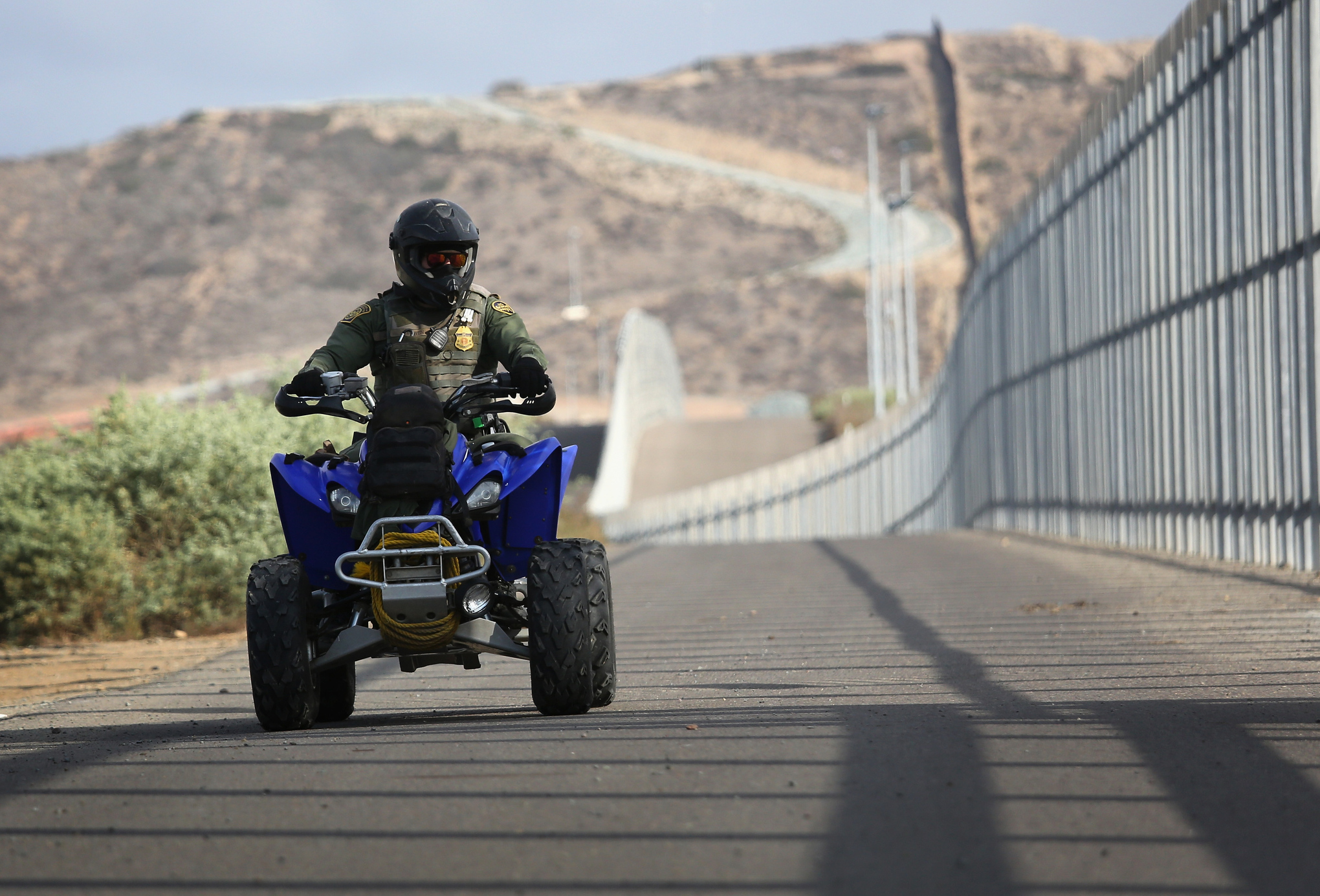 Customs and Border Protection agency standards theoretically require Border Patrol agents to use "the lowest level of force necessary" to resolve any situation. However, the old standards said that "because of unique circumstances and individual differences in every potential confrontation," it's okay for two different agents to have different reactions to the same scenario.

That standard makes it difficult to tell when management decides that an agent has crossed the line. The press reports of the unredacted Police Executive Research Forum review, which came out in February, showed Border Patrol agents doing things most people wouldn't consider a "reasonable" response. The review found cases of agents intentionally putting themselves into the path of cars that were trying to flee, to create "justification for the use of force." It also included cases of Border Patrol agents shooting at rock throwers in Mexico, through the border fence.

Why can't Border Patrol keep its agents in line?

A Border Patrol agent coordinates with a helicopter crew. (John B. Carnett/Popular Science)

In fairness, it's possible that in some of these cases, the Border Patrol itself found that the use of force was not justified and took internal action. "Agents are subjected to incredible scrutiny," an attorney for the Border Patrol agents' union told the Arizona Republic. "But the process is exceedingly opaque."

But there's just no public evidence of Border Patrol ever disciplining its employees for excessive use of force. When the Arizona Republic looked into the 42 Border Patrol killings, it couldn't find public record of any of those agents being disciplined.

When agency officials have gotten involved in excessive-force controversies, it's been to issue an "official" account of what really happened that exonerates their agents - despite evidence to the contrary.

The agency claimed, for example, that Hernandez Rojas (the man whose killing inspired the use-of-force investigation to begin with) was acting aggressively after being tased. Yet the Arizona Republic reported that "cellphone videos showed him begging for help, face-down on the ground, as a dozen agents shocked and struck him."

When the uncensored independent review of shootings was leaked by the Los Angeles Times, the Border Patrol tried to limit the fallout. Its commissioner issued policies that were slightly more restrictive: Agents are now required to have a "reasonable belief" that a car is using deadly force in order to shoot at it. Agents can only shoot at rock-throwers when threatened with "imminent danger of death or serious injury." Yet even these modest changes were unacceptable to the agents' union. When the new policies were announced in March, the Border Patrol union's official statement began with an excerpt from the story of David and Goliath. The message: Rocks can be lethal weapons, and agents should be empowered to respond in kind.

But the Border Patrol may not be able to fend off oversight for good — especially after Agent Esteban Manzanares attacked the three Honduran women last month. On March 26, Representatives Beto O'Rourke (D-TX) and Steve Pearce (R-NM) introduced the Border Enforcement Accountability Oversight and Stakeholder Engagement Act — a bill heavy on commissions and light on regulation that nonetheless proposes at least some oversight. That same day, a group of advocacy organizations launched a campaign to hold the agency accountable for use-of-force policies.

Even if neither the bill nor the advocacy campaign manages to make concrete changes, they're making it clear that use of force is a problem for Customs and Border Protection officials, and it's not one they can redact their way out of.