Right now is a perfect time to raise the gas tax

Share All sharing options for: Right now is a perfect time to raise the gas tax

For years, transportation experts have been muttering about the need to raise the US federal gas tax. The reason is simple: The tax was last set at 18.4 cents per gallon in 1993 and hasn't kept up with inflation. So Congress keeps running out of money to pay for roads. Indeed, Congress is going to run out of money for roads yet again in May 2015.

One argument against raising the tax has been that gas prices have already been high in recent years and a tax hike would just pinch households further. But in recent months, the price of oil has been crashing worldwide — and US gasoline prices have plummeted to their lowest levels in 4 years:

The national average price of gasoline has fallen to $2.72 a gallon in early December — about $1 per gallon cheaper than it was in July. And many analysts expect it could fall another 15 to 20 cents by the end of the month.

So why not raise the gas tax now?

A few lawmakers have already suggested as much. On Wednesday, Reps. Tom Petri (R-WI) and Earl Blumenauer (D-OR) said it was time once again for drivers to start paying for the roads they used. They've been touting a bill that would slowly lift the federal gas tax an extra 15 cents over the next three years — and then peg it to inflation. (This would bring it roughly to the level the gas tax would be at if it had been pegged to inflation back in 1993.)

The basic case for raising the gas tax

The single biggest problem in transportation policy today is that there's not enough money to pay for all the spending on roads, bridges, and highways that Congress keeps authorizing.

The federal government currently spends about $55 billion on transportation each year (about 80 percent of that goes to roads and highways, and the rest to mass transit). This accounts for roughly one-quarter of all US transportation spending, with the rest done by states and localities.

But federal gas tax revenue — which historically has been the means of paying for all those highway projects — keeps falling over time. It's currently at just $34 billion per year: 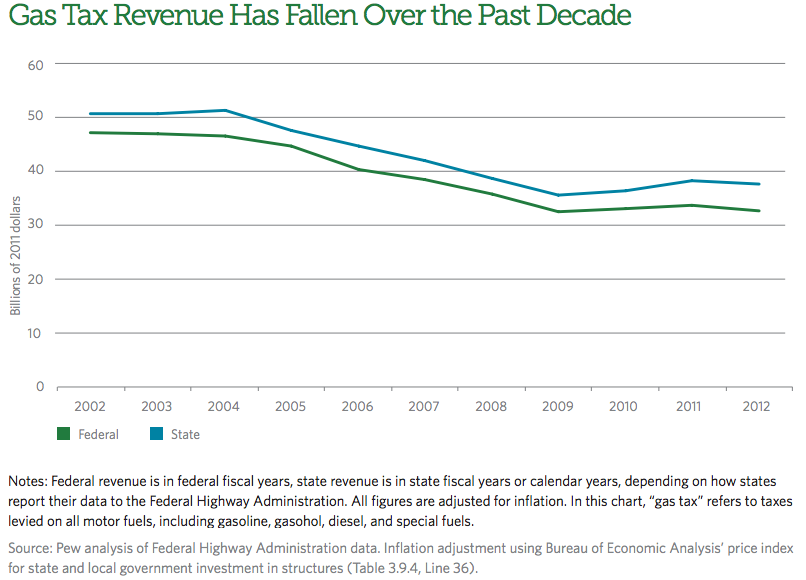 Part of this is due to the fact that Americans have been driving less and buying more fuel-efficient cars. But it's also due to the fact that the federal gas tax was last raised in 1993 and never indexed to inflation. So even though the cost of building roads and bridges has gone up, tax revenues haven't kept pace.

Congress has been relying on short-term gimmicks to fund highways

Now, in theory, Congress could cut spending on road projects to compensate. But no one wants to do that: House Republicans backed down from a bill to cut highway spending in 2012 after an outcry from state officials. Instead, lawmakers have relied on all sorts of bizarre gimmicks to fund transportation. They've pulled money from existing trust funds to help clean up leaking underground storage tanks. They've been fiddling with pension accounting. They've been raising customs fees.

But these gimmicks typically only last for a handful of months. Which is why Congress is set to run out of money for roads yet again in May 2015. At that point, they'll either have to cut spending or resort to yet more short-term funding tricks.

Alternatively, they could just raise the gas tax and solve this problem once and for all. And with US gasoline prices the lowest they've been in years, now would be the least-painful time to do it.

A side effect of raising the gas tax would likely be to spur Americans to buy more fuel-efficient cars — which in turn would curtail US dependency on oil and reduce the greenhouse-gas emissions that are  warming the planet.

Over the past four years, high gasoline prices — hovering around $3.50 per gallon — have spurred many Americans to buy smaller, more efficient vehicles. Overall fuel economy has gone up:

But now that gas prices are crashing, that trend is likely to stall out or reverse. Studies have found that when gasoline gets cheaper, people very quickly go back to buying less fuel-efficient cars. (This isn't always a good idea, since cars last for 10 years or more, while gas prices aren't guaranteed to stay the same for that long, but it seems to be a consistent pattern.)

A gas tax would counteract this move away from fuel-efficiency. One 2009 study found that a $1 increase in gasoline prices boosts the market share of the most fuel-efficient new vehicles by 20 percent, while reducing the market share of the least-efficient vehicles by 24 percent. A gasoline tax would have a similar effect (although the 15-cent hike being contemplated by Petri and Blumenauer is obviously much smaller).

Now, granted, there are other ways of promoting fuel-efficiency than gas taxes. The Obama administration has rolled out fuel-economy standards that are supposed to steadily increase the efficiency of cars and SUVs that automakers sell between now and 2025. But those regulations tend to be a bit clumsier. A recent study from MIT's Global Change program found that gas taxes were 6 to 14 times more effective at promoting efficiency than regulations.

In any case, it's hardly guaranteed that Congress will hike the gas tax — most lawmakers tend to be worried about the political backlash. But doing so now would be a lot less painful than doing so when gas prices are high.

-- What the huge drop in gasoline prices means for America

-- Map: How high are gas taxes in your state?