A report from the Death Penalty Information Center (DPIC), an anti-capital punishment organization, found that 35 people were executed in 2014, down from a peak of 98 in 1999. Three states were responsible for 80 percent of the executions in the US in 2014: Texas (10), Missouri (10), and Florida (8). 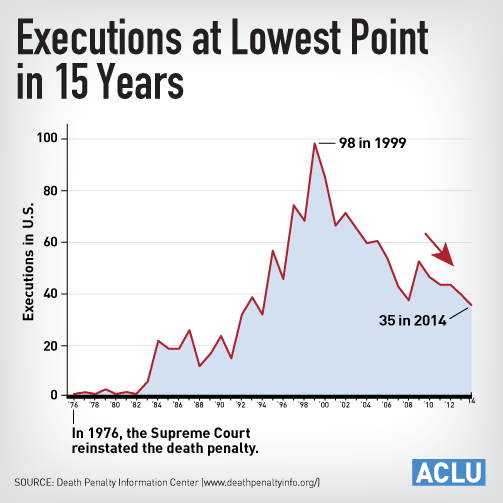 Some of the drop is due to states no longer carrying out executions. Eighteen states have banned the death penalty, with Connecticut, Illinois, Maryland, New Jersey, New Mexico, and New York doing so since 2007. Governors in Colorado, Oregon, and Washington unilaterally put all executions on hold while they're in office. In California, a federal judge declared the state's death penalty unconstitutional because it takes too long to execute people and it's applied arbitrarily.

Many states have also run out of drug supplies for lethal injections. After the European Union banned exports of drugs often used for executions, states resorted to experimental, sometimes secret cocktails of drugs to execute inmates. But the drugs drew criticism after botched executions this year in Ohio, Oklahoma, and Arizona, prompting some states to delay executions as they review their practices.