Share All sharing options for: Why 2014 could be a turning point for America’s racist criminal justice system

After a year in which police shootings dominated the news, a more mainstream movement has grown to dismantle racial disparities in the criminal justice system and particularly police use of force.

The movement got its start in Ferguson, Missouri, after the August 9 killing of Michael Brown, who was shot by then-police officer Darren Wilson. It's scaled to the national level since, with leaders connecting to followers through a newsletter and some activists meeting with President Barack Obama. With this new platform, activists have shined a spotlight on more and more black victims of police shootings, which protesters cite as evidence that something is deeply wrong with how the law treats minority Americans.

Given the wave of protests and attention they received, it seems 2014 may end up a crucial turning point in discussions about race and the criminal justice system. Here are three reasons to believe the tide might be changing — and one reason why, even with positive changes, these racial disparities are hard to fix.

1) Police killings put a spotlight on the issue

In August, the St. Louis-area demonstrations that aimed to draw attention to police brutality and Brown's death quickly grew to be much bigger than Ferguson. Protesters began highlighting — and the media began covering — every new police killing.

The chokehold death of Eric Garner in New York City, which happened about a month before Brown was killed, suddenly fell into a much broader context. And the shootings of Tamir Rice in Cleveland, Rumain Brisbon in Phoenix, and Akai Gurley in New York City, among many others, received a new level of scrutiny.

"As we look back at policing historically, typically you'll find these touchstone incidents that are really the straw that broke the camel's back," said Ed Maguire, a criminal justice professor at American University. "A certain incident will come along that will trigger what have been long-standing concerns."

When two different grand juries decided not to indict Darren Wilson, who killed Brown, and Daniel Pantaleo, who killed Garner, the protests and media attention intensified even further. For advocates, the fact that the police officers wouldn't face trial — much less get a conviction — was evidence enough that something in the criminal justice system is fundamentally broken.

"You and I probably wouldn't be having this conversation if indictments were returned," said Thomas Nolan, a criminologist at Merrimack College of Massachusetts. "People would have been convinced that the process at least played out, rather than having some sneaky business behind closed doors." 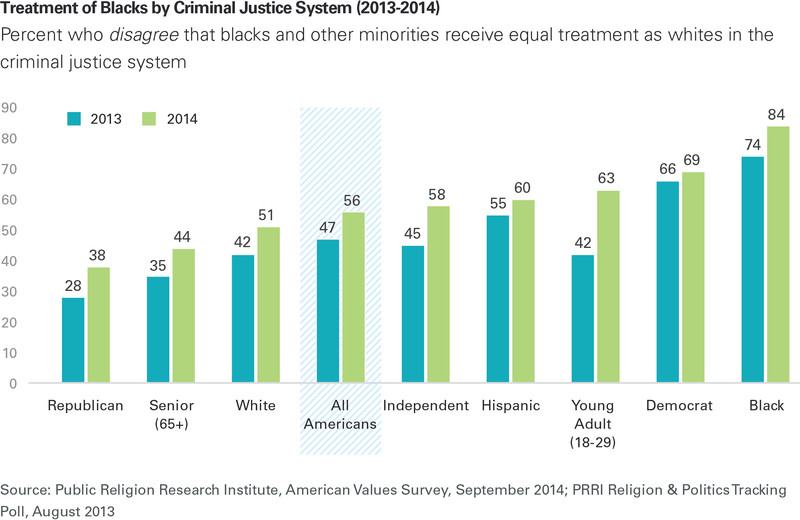 A September Public Religion Research Institute survey found that, between 2013 and 2014, there was a notable drop in the number of Americans who believe the US criminal justice system treats people of all races equally.

While young adults saw the most dramatic shift, there was also a significant change among everyone else — seniors and Republicans included. About 51 percent of white Americans appeared to agree that there are some racial disparities in the criminal justice system, up from 42 percent a year before.

It's possible this is a temporary blip, especially since the survey was conducted a month after the events in Ferguson. But because some studies suggest that it's difficult to get white Americans to see and care about racial disparities in the criminal justice system, the survey could indicate the beginnings of a big change in public perspective.

Beyond the protests over police use of force, 2014 ushered in several key reforms that dismantled criminal justice policies that have been much more likely to affect black communities over white ones.

US Attorney General Eric Holder, the head of the Justice Department, continued sentencing reforms that mostly target mass incarceration. In March, Holder issued new requirements for federal halfway houses, requiring them to provide more resources and support for nonviolent drug offenders — in hopes of offering an alternative or stopgap to imprisonment.

In July, the US Sentencing Commission ruled that nearly 42,300 federal inmates will be able to apply to get out of prison sooner for nonviolent drug offenses. While this change only affects federal prisoners, it comes on the heels of state-level experiments with sentencing reform that have allowed many states, particularly California, to significantly shrink their prison populations.

California voters in November approved Proposition 47, which reduced several nonviolent drug and property crimes from felonies to misdemeanors. And voters in Alaska, Oregon, and Washington, DC, voted to legalize marijuana — although a congressional spending deal could overturn DC's vote.

These types of policy changes have helped bring down and stabilize the US prison population over the past few years. But Brian Elderbroom, a senior research associate at the Urban Institute's Justice Policy Center, argued more reforms will be needed to reduce the incarceration rate further.

"We didn't get to today's incarceration rate overnight," Elderbroom said. "We're not going to get to the imprisonment rates that we believe are more appropriate overnight."

The Obama administration has also set out policies that will attempt to reform police departments around the country. One initiative, which has been dubbed Holder's "legacy project," brings together experts in policing to help foster better communications and more transparency between police and residents. And President Obama created a task force that will release a report next March on how to further strengthen public trust in police, particularly with how officers use force.

These reforms aren't exclusively targeted at helping black Americans. But they do alleviate tough-on-crime policies that disproportionately affect minority communities.

"Right now, unwarranted disparities are far too common," Holder said in a 2013 speech. "As President Obama said last month, it's time to ask tough questions about how we can strengthen our communities, support young people, and address the fact that young black and Latino men are disproportionately likely to become involved in our criminal justice system — as victims as well as perpetrators."

But changes may be difficult to execute

When it comes to racial disparities in any system, policy changes can only do so much. If some cops and police departments are policing communities of color more aggressively than white areas, they'll need a fundamental change in their internal culture to fully address the problem.

Some research indicates that racial disparities may be rooted in subconscious forms of prejudice known as implicit bias. But this kind of bias is particularly tricky to deal with, since it requires making an officer both aware of his or her subconscious biases and then training him or her in ways to keep that bias in check. Not only does that demand a special kind of self-awareness, but it can require departments to fundamentally change how they train their officers.

Police culture may also be particularly difficult to change because officers are encouraged by police unions and a sense of camaraderie to stand together, which could stifle dissent within the ranks.

"[Y]ou may have a group of black police officers who feel very differently than the union does, but those folks don't have bargaining power," Phillip Goff, director of the UCLA's Center for Policing Equity, told Vox's Jenée Desmond-Harris. "They don't have the political power that the official bargaining union does."