5 health challenges the world will face in 2015

Share All sharing options for: 5 health challenges the world will face in 2015

You'll be hearing a lot more about antimicrobial resistance in 2015 because we are literally running out of effective antibiotics.

It's natural for bacteria and viruses to evolve and slowly resist the drugs that we invent for treating the infections they cause. But for decades, we've been speeding up their evolution by overusing antimicrobials when they're not needed, by not completing prescribed courses of treatment, and by breaking infection control protocols in hospitals where these superbugs can easily spread.

In the past we've just invented new medications when the old ones became less effective. Unfortunately that strategy isn't sustainable: there have been no new discoveries of distinct classes of antibacterials since 1987.


Illustration of the discovery void in antibiotics. (Via Clinical Microbiology Review)

The deepening antimicrobial resistance is scary when it's coupled with this discovery void: so much of our health depends on antibiotics that work. It's not just wounds, sore throats, or STDs that need treating. Much of contemporary medical care relies on antibiotics to stop infection. Anyone who has gone through a cancer treatment, an organ transplant, a hip replacement, or a complicated pregnancy — who has a friend that has — benefited from these drugs. That pretty much means all of us.

Governments are finally picking up speed in trying to thwart this crisis. Several US and international responses are planned for next year. The World Health Organization will be publishing a "Global Action Plan on Antimicrobial Resistance" in May 2015. The O'Neill Review in the United Kingdom will publish its findings, building on preliminary results from last week that found antimicrobial resistance will result in at least 10 million extra deaths per year (more than projected cancer deaths) and cost the world economy up to $100 trillion by 2050. There will also be action closer to home: antimicrobial resistance will be a key part of the Obama Administration's Global Health Security Agenda.

2) Ebola hysteria is over. But it shouldn't be.

Just because Ebola hysteria has died down doesn't mean this public-health issue will be any less urgent. This year marked the worst-ever Ebola outbreak and the first time we saw international spread of this deadly virus. The fallout from the epidemic isn't going to be easy to fix.

The economies of West Africa have been severely damaged: people have lost their jobs as a result of Ebola, children have been home from school, there has been widespread food shortages. The outbreak has done untold damage to health systems in Guinea, Liberia and Sierra Leone. Hundreds of doctors and nurses died on the front line, and these were countries that didn't have many health workers to begin with.

We know that during this Ebola crisis people have not been getting the routine health attention they need, including childhood immunizations and pregnancy care. So the global health community is going to need to coalesce around the damage control from this epidemic; that's after stopping transmission in the three most-affected countries, which still hasn't happened.

There is a potential silver lining to the anticipated attention to Ebola next year. Drug companies are racing to develop vaccines and therapies, so 2015 might actually bring the first-ever Ebola treatment or preventative product  to market. (There are currently more than a dozen Ebola drugs in development, but so far none has been proven to work in humans or approved for sale.) This is a big deal considering the virus was discovered in 1976 and has mostly been ignored by the pharmaceutical industry.

As soon as the first drug or vaccine successfully makes its way through clinical trials, it could hit the market in record time. This past week, President Barack Obama signed a bill into law that will allow the company that develops a promising therapy to get priority review by the Food and Drug Administration, meaning any application would be swiftly processed. This amounts to a massive incentive to continue pushing hard for an Ebola cure.

Even if Ebola is cured and fades from our collective consciousness, international development will continue to make headlines in 2015 in the run up to new Sustainable Development Goals that the United Nations and its 193 member states will put forward as a roadmap towards the world we want. This roadmap replaces the Millennium Development Goals, which have guided foreign-aid priorities since 2001. The new development framework will be informed by the most extensive global consultation process ever undertaken by the United Nations.

Despite what the news headlines may have us believe, the world has actually progressed enormously over the past 25 years. Perhaps no field of international development has seen as much progress as global health — helped by having three of eight Millennium Development Goals linked to it.

There has been a quintupling of funding from national governments and philanthropists, going from $5.82 billion USD in 1990 to $31.3 billion USD in 2013. Using 1990 as a baseline, child mortality has been cut by 47 percent, maternal mortality by 45 percent, and the spread of HIV/AIDS, malaria and other diseases is starting to reverse.

One of the most succinct descriptions of the climate change crisis came from a new science-based fiction book this year by Naomi Oreskes and Erik M. Conway, The Collapse of Western Civilization.

"In the prehistory of 'civilization,'" the book begins, "many societies rose and fell, but few left as clear and extensive an account of what happened to them and why as the twenty-first-century nation-states that referred to themselves as Western civilization."

The urgency for figuring out how to coordinate on climate change is mounting. The presence of greenhouse gases are as high as ever, and their rate of emission continues to increase. According to Dr. Margaret Chan, Director-General of the World Health Organization, this is a matter of global health. "The evidence is overwhelming: climate change endangers human health. Solutions exist and we need to act decisively to change this trajectory." 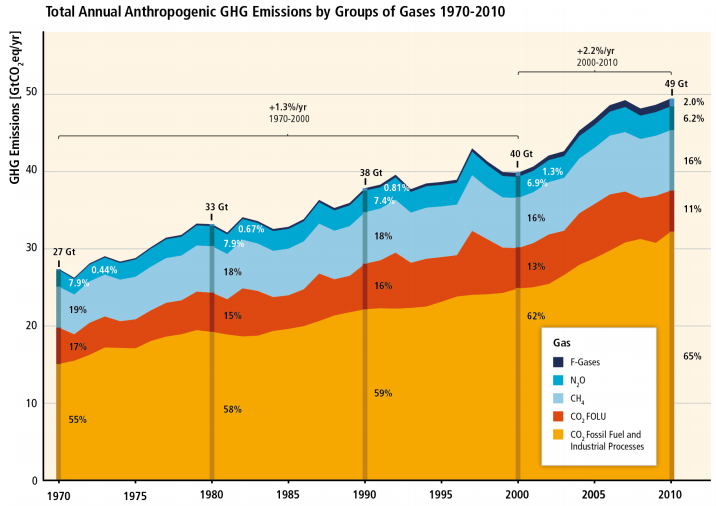 Maybe 2015 will be different. Even before COP 20 ended in Lima in December, the world already began looking to COP 21 at which a new legally binding agreement is expected to replace the largely unsuccessful Kyoto Protocol.

But whether a new agreement will actually dent greenhouse gas levels is up for debate. So far, climate change negotiations — judged solely on the outcomes achieved — have not been very successful. This raises questions about whether international treaties ever really have much effect. A recent review of 90 quantitative impact evaluations shows treaties have mixed results.

All of that will somehow need to change. Even if the political agreement at COP 21 in Lima is (magically) fully implemented, it will not avert levels of global warming that scientists tell us will cause disastrous effects. Hopefully the beauty and charms of the French capital will make all the difference.

This is a very scary fact about contemporary medicine, and one everyone who works in health care knows to be true: the results of lots of the clinical trials that are done never see the light of day. If researchers don't like the results they get or a drug company arrives at unflattering conclusions, the data doesn't need to be published — and none of us, the people who use the various drugs and devices under testing, will ever know. This means the entire evidence base for medicine is biased.

For years, nerds and researchers have been flagging this problem. And the good news is that they're finally gaining momentum, with some potentially big wins on the horizon next year.

Under a new plan, proposed by the US Department of Health and Human Services last month, researchers who run clinical trials would be made to register them on the biggest database of clinical trials in the world (clinicaltrials.gov) within three weeks of signing up the first study participant, and also report a summary of results — no matter the outcome. The plan, if approved, will vastly expand the trove of data on the database.

As well, the results of an Institute of Medicine report on clinical trial data sharing will come out in the new year, and it's expected to contain very important guidance about how even more granular patient-level data should be shared from clinical trials.

This progress in the US parallels the AllTrials movement in Europe, led by crusading scientists and doctors, to get every clinical trial registered, with their full methods and results reported. Governments, including America's, have signed up for the campaign and promised to take action. There have also been changes to how the European Medicines Agency — Europe's equivalent to the FDA — regulates the drug approvals process, and the publishing requirements for the clinical trials they use.

Addressing this problem is going to take time. It requires cooperation around data sharing from players on all sides — the regulators, the scientific community, universities, journals, the pharmaceutical industry. But figuring out how to bring more clinical trials out of the dark will improve every medical decision that needs to be made.