Why gas prices vary so much from state to state

Share All sharing options for: Why gas prices vary so much from state to state

Thanks to the plunge in oil prices, gasoline in the US is the cheapest it's been since 2009 — averaging $2.47 per gallon on Thursday:

But that's just the national average. The actual price at the pump can vary wildly depending on where you live. A driver in St. Louis now pays about $2.08 per gallon. But in San Francisco, it's $2.97 per gallon. That's a difference of roughly $14 to fill up a tank.

Why the disparity? A few reasons:

1) Taxes: The biggest factor is taxes — different states (and localities) tax gasoline at different rates, depending on how much they want to raise for highways, roads, and bridges. (This is in addition to the 18.4-cent-per-gallon federal gas tax.) In Missouri, the gas tax is just 35.7 cents per gallon. In California, it's 68.18 cents: 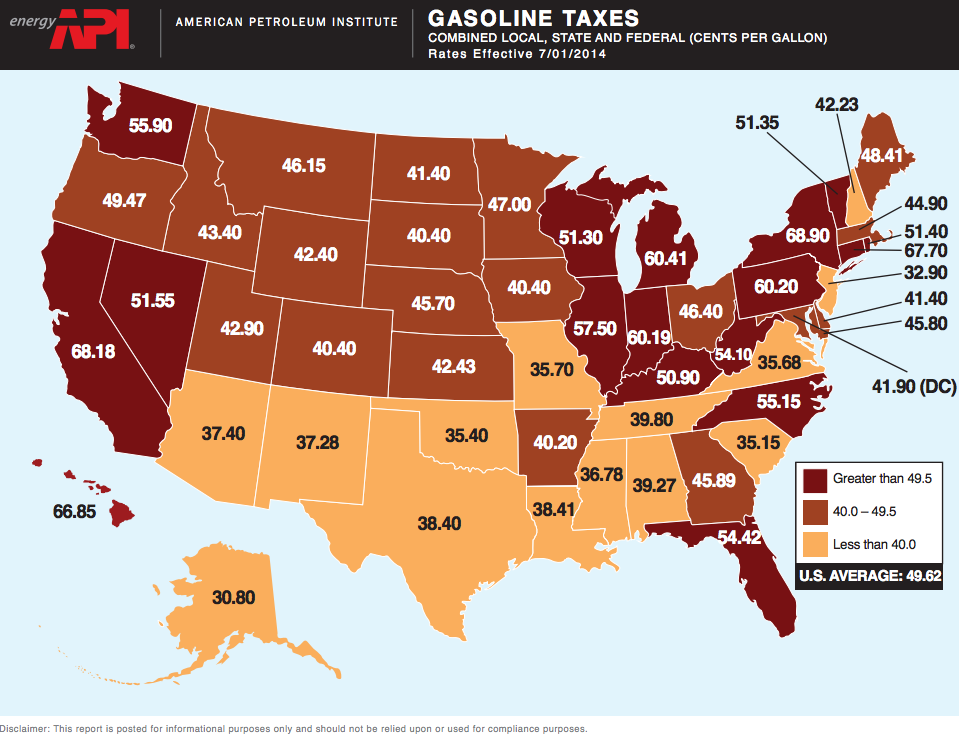 2) Environmental laws: On top of that, a few states, like California, have laws that require cleaner-burning fuels for cars — that can make gasoline even pricier.

Gas prices are typically lower along the Gulf Coast, which is near large refineries

3) Distance to refineries: Gas prices are often lower in places like Mississippi, Alabama, Texas and Louisiana because they're close to the large refineries on the Gulf Coast — so the transportation costs of bringing gasoline to retailers is lower. By contrast, Hawaii and Alaska are far away from supply, so gas is much more expensive there.

4) Type of oil used: There are also more subtle factors. Refineries on the East and West coasts tend to use a more expensive type of oil — which is based on the price of Brent North Sea crude and currently trades at around $59 per barrel.

Refineries in the Gulf Coast, by contrast, use more oil that's benchmarked to West Texas Intermediate, which currently trades for around $54 per barrel. The oil boom in Canada, Montana, and North Dakota, along with pipeline bottlenecks, accounts for some of that difference between Brent and WTI — although the gap is now much, much narrower than it was a few years ago.

Keep in mind things can also change over time: In the past, gas prices have spiked a bit on the East Coast when a number of large refineries had to close down for maintenance, for instance.

Gasoline gets cheaper in the winter, pricier in the summer

There's another twist here, too. Every year, gasoline prices rise in the summer and fall in the winter.

The reason? People take more vacations when the weather's nice, which puts upward pressure on prices. But refiners also have to put out a pricier "summer blend" of gasoline that's less likely to evaporate in the heat and less likely to create smog. Once the summer's over, they can switch back to the winter blend (made with cheaper ingredients like butane) and gas prices typically fall again.

That all said, when the price of oil plummets, gasoline tends to be much cheaper for everyone in all seasons — even if there are variations here and there. According to the US Energy Information Administration, if oil prices stay at their current low level, the average US household will pay about $550 less for gas in 2015 than they did in 2014.

Why oil prices keep falling — and throwing the world into turmoil