Share All sharing options for: Marijuana legalization hasn't made US teens more likely to use pot, federal agency says

Teen marijuana use fell in 2014, new data shows, despite the beginning of legal pot sales in Colorado and Washington state.

The nationwide Monitoring the Future survey found past-year teen pot use dropped from 26 percent to 24 percent between 2013 and 2014 for eighth, 10th, and 12th grade students. But use rates were still much higher in 2014 than they were in the early 1990s. 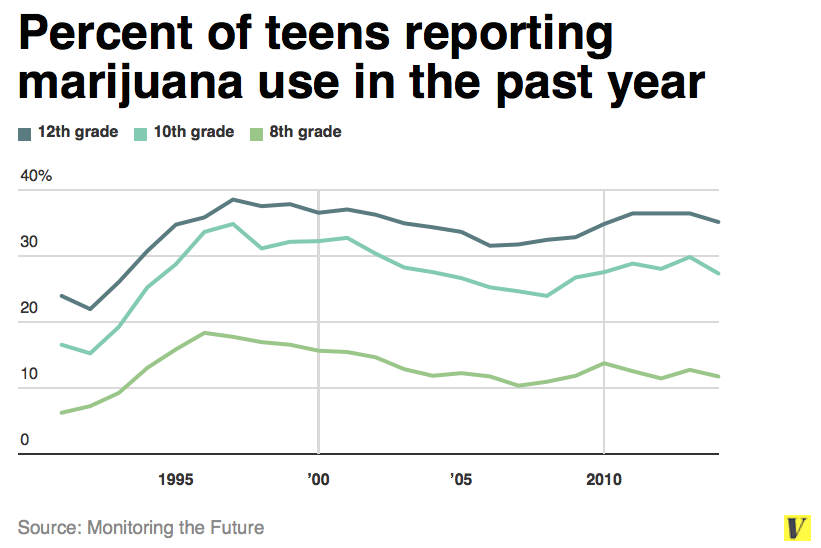 The numbers aren't specific to Colorado and Washington state. But the reported rates represent a slight downward shift in nationwide teen marijuana use after years of upward trends, even as teens report viewing marijuana as less risky compared to previous years.

The National Institute on Drug Abuse (NIDA) said the survey indicates that marijuana legalization for adults in some states didn't lead to increased pot use among US teens.

"Even marijuana remained level, instead of increasing, which is pretty good news considering that marijuana has been made legal for adults in a few states and has gotten so much positive press by people who want to make it legal everywhere," NIDA stated in a blog. "So far, that doesn't seem to have made teens more likely to use marijuana."

Alcohol, cigarette, and other drug use remained stable or declined, according to the survey.

"It's going to be a while before things stabilize"

Drug policy experts say it's far too early to know the full effects of legal pot sales. Mark Kleiman of UCLA and Beau Kilmer of the RAND Drug Policy Research Center cautioned on Monday that even Colorado's first-in-the-country recreational marijuana industry is far from stable, with prices for recreational pot still higher than prices in the medical market.

"It's going to be a while before things stabilize," Kilmer said.

Kleiman and Kilmer said they expect recreational prices to drop as more vendors and producers get into the industry, which could make excessive marijuana use more affordable and common. More production and the commercialization of marijuana could also bring fresh attempts to push the product to new consumers across the country and globe.

"We're seeing the expected level of marketing irresponsibility from the vendors, but they don't have much to sell at the moment," Kleiman said in September. "When they've got something to sell, we'll see how aggressive they get."