What is El Niño — and why should I care?

Back in 1997-'98, a massive El Niño in the Pacific Ocean pushed global temperatures to new highs and triggered a spate of extreme weather around the world, ultimately causing some $35 billion in damage and 23,000 deaths.

It was a reminder that El Niños can be extremely powerful events, disrupting weather patterns all around the world. Climatologists have been talking up the possibility of a strong El Niño in late 2015, which is worth watching. 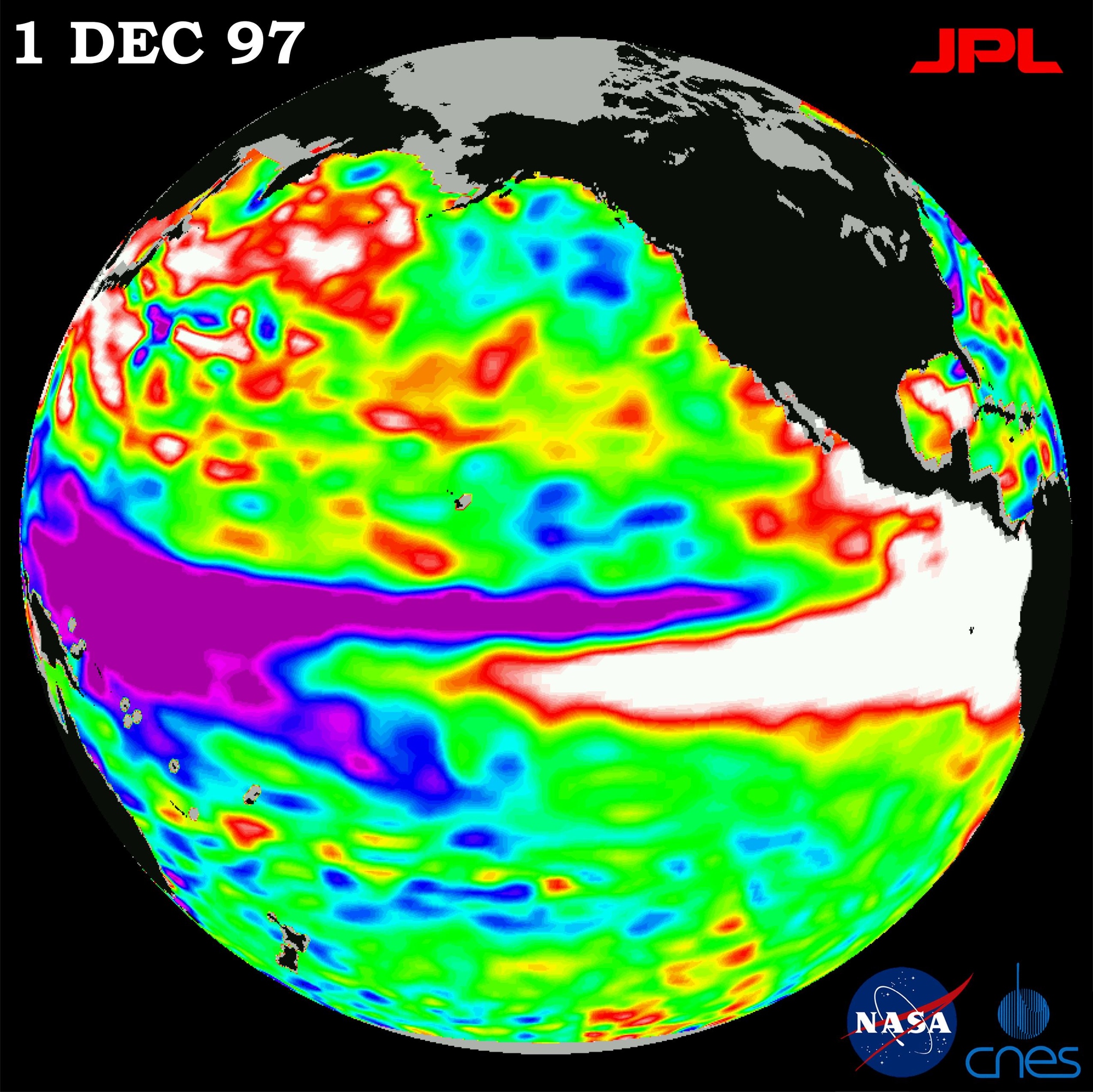 El Niño is a complex weather phenomenon that occurs irregularly in the eastern tropical Pacific Ocean every two to seven years. When the trade winds that typically blow from east to west in this region weaken, sea surface temperatures in the east and central tropical Pacific start rising.

Some El Niño events are strong, some are mild — and they can last anywhere from seven months to two years. But El Niño events typically push up global surface temperatures and bring heavy rain to South America, drought to countries in the western Pacific, and warmer winters to the United States.

A strong El Niño, in combination with global warming, can push global surface temperatures to new highs. It can bring heavier rain to Peru and serious drought to Australia. But the effects aren't always negative: a strong El Niño can also bring needed rain to California, for instance.

How does El Niño work, exactly?

To understand how El Niño works, we first need to see what the equatorial Pacific looks like under normal, or "neutral," conditions — and then look at how things change: 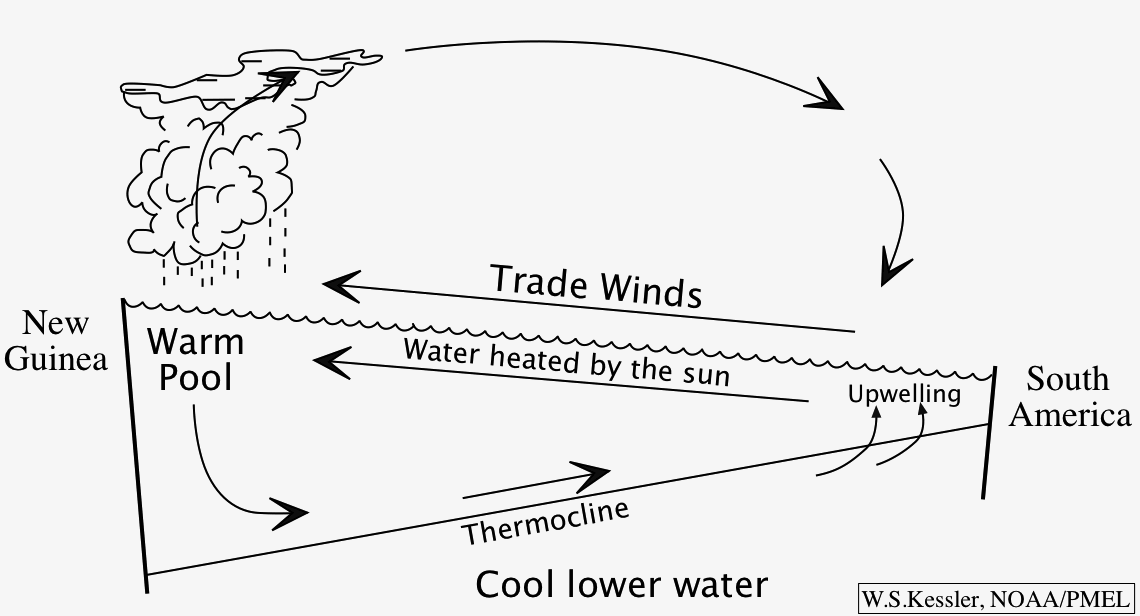 Normally, the tropical Pacific features strong trade winds that blow ocean water from east to west. All that warm water piles up in the west, near Indonesia. Meanwhile, back east along South America, frigid water deep down in the ocean gets pulled up closer to the surface, cooling the waters around Peru.

AS THE TRADE WINDS BLOW WEST, WARM WATER PILES UP NEAR INDONESIA

The result? During "neutral" conditions, sea levels are about half a meter higher in Indonesia than they are in South America. Sea surface temperatures near Indonesia are also about 8°C (14.4°F) warmer than they are near Peru. That temperature difference creates a convective loop in the atmosphere that, in turn, reinforces the trade winds.

Because the Pacific Ocean is so vast, this system is a major driving force in the global climate. The large warm pool of water near Indonesia causes the air above it to rise, creating rainfall. And this system shapes the jet streams that guide weather and storms around the world.

But every so often, along comes El Niño to disrupt the usual pattern: 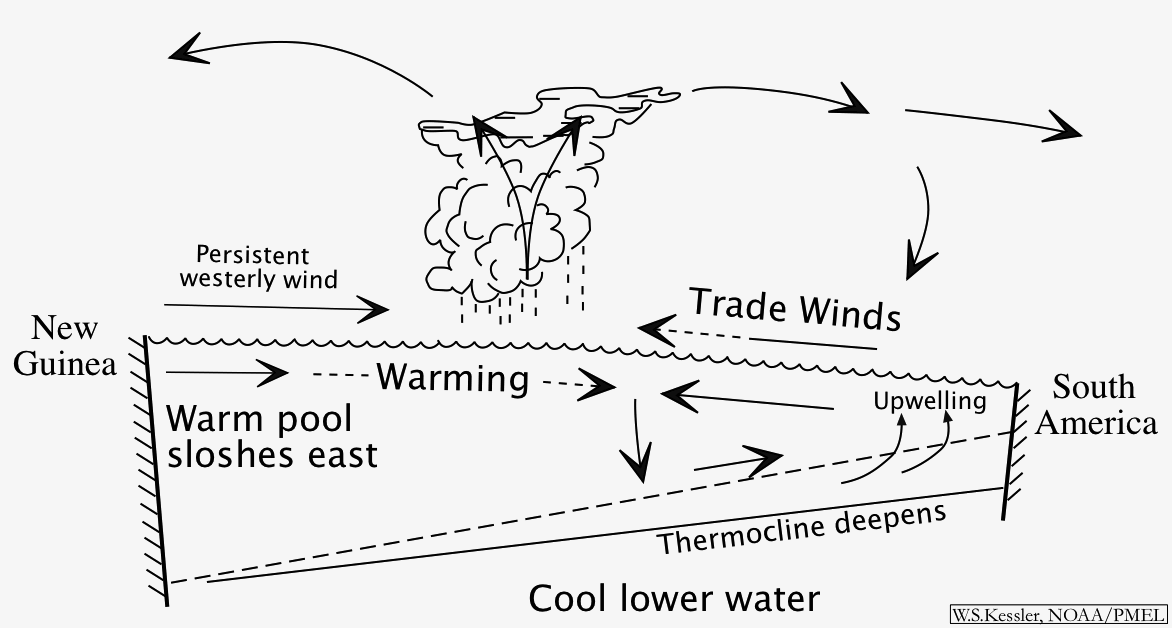 For reasons that are still being debated, those prevailing Pacific trade winds can get disrupted every few years.

This causes sea surface temperatures in the east and central Pacific to start rising and the trade winds to weaken further. What's more, rainfall starts following that warm pool of water as it travels eastward. That's why El Niño is usually associated with drier weather in places like Indonesia and Australia, as well as heavier rains in places like Peru.

Scientists typically declare an official El Niño when sea-surface temperatures in the equatorial Pacific Ocean (namely, the Niño 3.4 region) rise 0.5°C above their historical average for three months in a row — and once atmospheric conditions and rainfall patterns shift accordingly.

By the way, La Niña is basically the opposite of El Niño — it occurs when those east-to-west trade winds strengthen. The result: cooler sea surface temperatures in the center and east pacific and a more intense version of "neutral" conditions (drier weather in South America, wetter weather in Indonesia, and so on).

(For a more detailed description of El Niño, see this overview from William Kessler, an oceanographer at NOAA's Pacific Marine Environment Laboratory — and thanks to him for sending along the graphics used above. See also here and here.)

How often does El Niño occur?

Every two to seven years, on average.

What's the difference between a strong El Niño and a weak one?

Remember, an El Niño occurs after the Pacific trade winds that normally blow east to west weaken. That allows the warm water that's pooled up in the west to start spreading eastward.

The "strength" of El Niño depends, in part, on how far that pool of warm water moves eastward. There are a couple possibilities:

El Niño "Modoki": In so-called Modoki events, the warm water only spreads to the central Pacific, and the water remains cold near South America. This is sort of a twist on the El Niño, and the effects can vary — for one, the lack of warm water in the eastern Pacific means that a Modoki might not bring as much rain to California.

Strong El Niño: In a strong El Niño, the warmer water spreads all the way to the eastern Pacific. This is what happened in 1997-'98. By October 1997, the water near South America was significantly warmer than usual:

This El Niño was the strongest on record, causing some $35 billion in damages worldwide and a spate of extreme weather events that were blamed for at least 23,000 deaths.

Even when forecasters do expect an El Niño, the strength is often tough to predict. William Kessler, an oceanographer at NOAA's Pacific Marine Environment Laboratory, offers this word of caution: "We get a lot of surprises. Nobody even knew about these Modoki events until the last decade," he says. "I've been surprised before, and I'm ready to be surprised again."

What sort of weather impacts does El Niño have?

An El Niño can have vast and far-reaching effects around the world. A lot depends on how strong or weak the El Niño is, but here are some of the broad global impacts:

Flooding in South America: Warmer water in the eastern Pacific typically brings heavier rain and flooding to South America. Peru and Ecuador typically get hit with storms and floods, as well as cholera epidemics and other waterborne diseases. 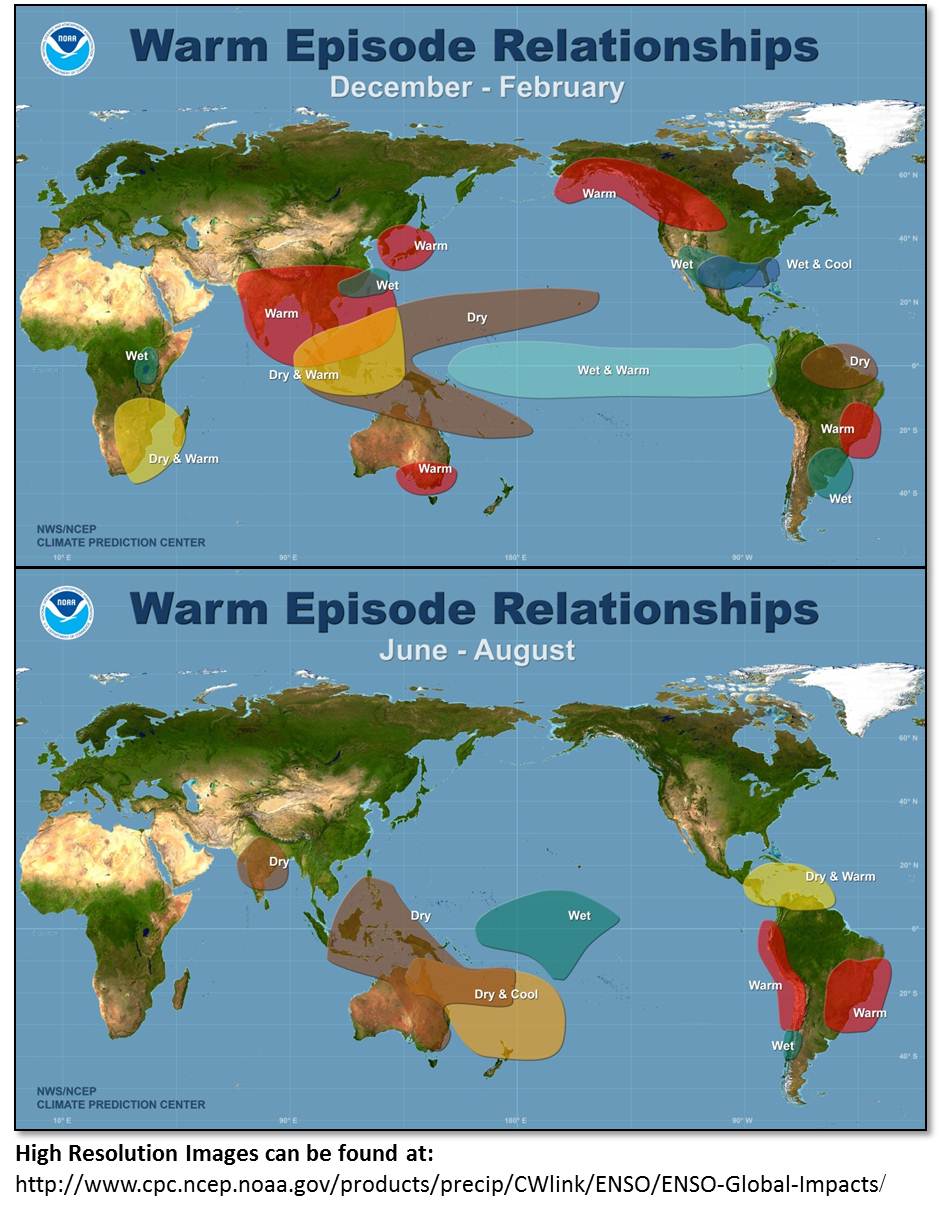 Warmer, drier winters in the eastern and midwestern US: El Niño's effects in the United States don't usually kick in until winter — and the phenomenon is usually associated with drier, warmer winters around the Midwest and East Coast. That often means less snowfall, though it depends on the shape of El Niño.

Declining fisheries: In normal conditions, the upwelling of cold water from the deep ocean off the coast of South America churns up plenty of nutrients that make those fisheries some of the most productive in the world. But during El Niño, that supply of nutrient-rich water from the deep ocean is cut off, causing these fisheries to decline. (Indeed, fishermen in South America were the first to notice — and name — El Niño.)

By contrast, El Niño is usually associated with relatively fewer hurricanes in the Atlantic. One hypothesis is that El Niño brings stronger winds to the upper atmosphere of the Atlantic that can shear apart (some) tropical storms before they can get too strong.

Higher global temperatures: During an El Niño, the warmer tropical waters in the Pacific can transfer their energy to the atmosphere. When combined with man-made global warming, this can push global average surface temperatures to new highs. But, again, this may depend on the type of El Niño we get.

(For more information, this page from the National Oceanic and Atmospheric Administration has a wealth of detail on El Niño's impacts.)

How could El Niño affect the United States?

El Niño tends to affect the tropical areas in the Pacific first, while its impacts on the United States usually aren't felt until the winter. That's because El Niño affects the jet stream, which mainly affects winter weather in the US.

Here are a few broad patterns — though they are only patterns, not certainties: 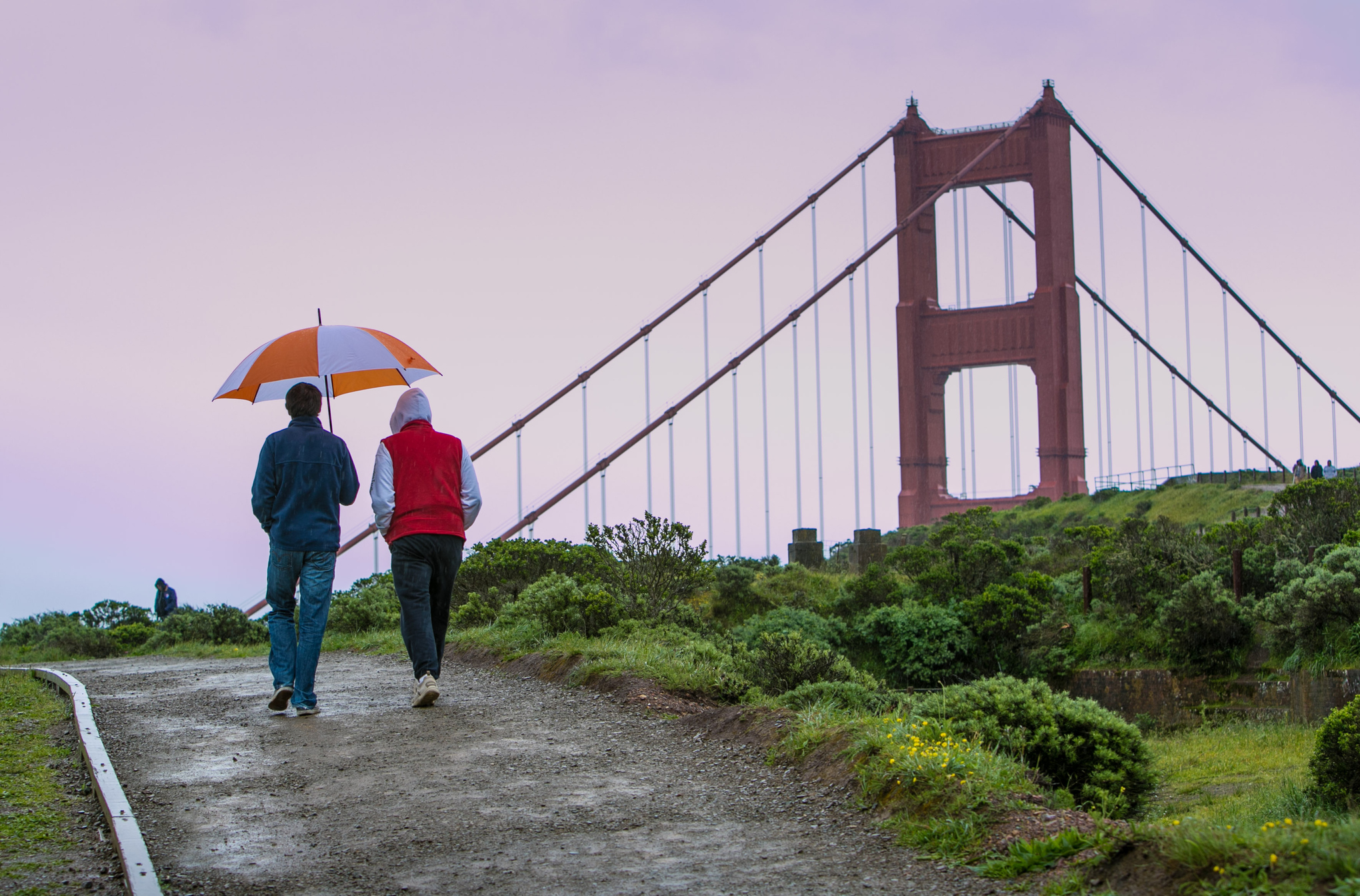 Wetter winters in California: A strong El Niño can bring heavier precipitation to California and the southwestern US in the winter. But there are twists here — a medium-size El Niño or "Modoki" event might not bring that much rain to California.

More severe weather in the South: During an El Niño, the jet stream stretches from the eastern Pacific across the southern United States, often bringing more frequent and stronger storms to the region, particularly during the winter.

Somewhat fewer Atlantic hurricanes: A strong El Niño typically increases hurricane activity in the Pacific and lowers it slightly in the Atlantic (by increasing the wind shear that prevents storms from forming). On the other hand, Hawaii could see an increased risk of tropical storms.

More tornadoes (?): There's some evidence that El Niño events are associated with increased tornado activity in some parts of the United States, although this is still much debated.

Caveats: There are a few things to keep in mind. El Niño doesn't guarantee any specific weather pattern. It's an influence, yes, but not necessarily a deciding factor.

What's more, there's not a lot of historical data to work with here. Over the past 30 years, subsurface ocean temperatures in the Pacific have only risen as high as they currently are once — in 1997. So unexpected impacts are very possible.

Why does El Niño often lead to record global temperatures?

Because of global warming, the Earth's average surface temperature has been going up over time. But there's a lot of variation from year to year.

What's going on? As humans put more greenhouse gases into the atmosphere, we're trapping more and more heat on the Earth's surface. But more than 90 percent of that extra heat is absorbed by the oceans. So subtle interactions between the ocean and the atmosphere can make a big difference for surface temperatures.

During La Niña events, more of that heat is trapped beneath the ocean surface, suppressing surface temperatures a bit.

When an El Niño hits, by contrast, more of that heat is essentially transferred to the surface. As NASA's Gavin Schmidt explains, temperatures typically peak about three months after an El Niño event. And a strong El Niño tends to transfer more heat to the surface than a weak one does.

So a strong El Niño can often lead to new record highs. Earth's average surface temperatures reached a then-record in 1998 — due to the combination of global warming and an extremely strong El Niño. Then, in 2005, surface temperatures reached another new high, due to continued global warming (and the end of a much weaker El Niño).

In 2014, meanwhile, global temperatures reached a new high without an El Niño — again, global warming is still ongoing. It's possible that a subsequent El Niño could push those temperatures up even higher.

How did El Niño get its name?

One oft-told story is that Peruvian fisherman in the 1800s noticed a warm ocean current that would appear around Christmas and called it "El Niño" (meaning "little boy" or "Christ child").

Over time, people realized that these events could be stronger or weaker, and started referring only to the stronger events as El Niño. Then, in the 1960s, scientists realized that El Niño wasn't just a phenomenon limited to Peru — it was a phenomenon that occurred all across the tropical Pacific Ocean.