The EPA's ozone rule could be its biggest, most controversial regulation yet

Share All sharing options for: The EPA's ozone rule could be its biggest, most controversial regulation yet

What is ozone — and why is it a problem?

The downtown skyline is enveloped in smog shortly before sunset on November 17, 2006 in Los Angeles, California. (David McNew/Getty Images)

Ground-level ozone — the main ingredient in smog — is formed when pollutants such as nitrogen oxides from cars and power plants interact with heat and sunlight.

The resulting pollution can "trigger a variety of health problems including chest pain, coughing, throat irritation, and congestion. It can worsen bronchitis, emphysema, and asthma." High levels of ozone can also damage crops and farms.

The American Lung Association estimates that 140.5 million Americans live in areas with unhealthy levels of ozone, putting them at higher risk for respiratory diseases. During the summer, the Clean Air Campaign issues "code red" alerts for cities if smog levels spike, warning those with heart or lung disease to avoid any strenuous activities.

The emissions that help create ozone come from a variety of sources — cars and trucks, refineries, power plants, factories, oil and gas wells. Ozone levels are also partly dependent on the amount of heat and sunlight around (that's why global warming is expected to increase ozone pollution further). And in California's Central Valley, weather patterns tend to trap pollutants, leading to unusually high levels of smog.

(By the way, when ozone is near the Earth's surface, it acts as a lung irritant. But ozone high up in the stratosphere actually protects us from the sun's harmful ultraviolet rays. So too much ozone on the ground is bad, but too little ozone up high — an "ozone hole" — is also bad.)

Why is the EPA regulating ozone?

Under the Clean Air Act, the EPA is required to conduct a review of its national ozone standards every five years and update them as needed to protect human health. By law, the EPA is not supposed to consider costs when crafting these rules.

Back in 1997, the Clinton administration set the standard at 84 parts per billion. Then, in 2006, the EPA revisited the science on ozone and health and recommended a lower level of 60 to 70 parts per billion. This was based on new data, as researchers realized ground-level ozone might actually be killing people, not just causing respiratory problems.

In 2008, the Bush administration proposed a less-stringent standard of 75 parts per billion. Groups like the American Lung Association quickly sued to stop the Bush rules, which they claimed were too weak and would lead to thousands of unnecessary deaths and cases of respiratory disease.

After coming into office, President Obama promised a fresh review. The EPA's scientists again proposed a limit between 60 and 70 parts per billion. But industry groups warned this could cost billions, and the White House decided to postpone any new ozone rules until after the 2012 election. (Obama's then-chief of staff, William Daley, was reportedly nervous about the impact the rule might have on industries in swing states.)

Environmental groups were outraged and filed lawsuits. The courts ordered the EPA to come up with a proposal by December 1, 2014. So that's what's happening now. A final rule is supposed to get finished by October 1, 2015.

How will these new standards work?

The EPA is proposing to tighten the standard for ozone in the air to somewhere between 65 to 70 parts per billion. (The agency is also soliciting comment on other options, like an even stricter 60 parts per billion standard that many environmental groups would prefer.)

Here's a map of all the areas where ozone pollution is currently higher than the proposed limit:

In its proposal, the agency calculates that stricter standards will save thousands of lives and lead to fewer heart attacks, asthma attacks, and other respiratory illnesses. Many of those benefits come not just from cleaning up ozone, but a corresponding reduction in particulate matter pollution. All told, the agency estimated that an ozone standard of 65 parts per billion would produce between $19 billion and $39 billion in health benefits by 2025 (in today's dollars).

So how will the rule work? The EPA will monitor air quality around the United States. If any county has ozone levels over the limit for an extended period, then the EPA deems it a "non-attainment area." States then have to come up with plans to reduce pollution in these places over the next 3 to 20 years. (Areas with the worst smog, like Los Angeles, typically get more time.)

In these "non-attainment" areas, anyone hoping to build a new factory or power plant might have to go through extra permitting hoops, adopt stricter new pollution-control technology, or even pay to offset their emissions. (In practice, many companies just end up moving to areas with less smog.)

How much will these regulations cost?

The short answer is that it's really unclear — a lot depends on what the final rule looks like and how many counties are affected.

In either case, the health benefits to the broader public would exceed the costs to polluters. But the companies that have to bear those costs aren't pleased with that trade-off. The National Association of Manufacturers (NAM) has warned that strict ozone standards "would be the most expensive regulation ever imposed."

Meanwhile, outside analysts say it's worth being skeptical of any cost predictions right now. Even if a stricter ozone rule does get proposed, it will take a long time to implement. After the Bush administration put forward its ozone standard in 2008, it took three years for the EPA to figure out which areas were in non-attainment. States then had an additional three years to come up with clean-up plans. Until we know what that looks like, it's hard to gauge costs.

"At the moment," writes James McCarthy of the Congressional Research Service, "no one knows what a revised [ozone standard] would cost, because ... we don't know what areas will be designated nonattainment. But even after a proposal is signed, cost estimates will be little better than guesses."

Another caveat to any predictions of doomsday: Historically, many pollution regulations end up costing less than originally estimated because new, unforeseen technologies helped companies adapt. That might turn out to be the case here: new techniques to reduce ozone-forming emissions are already popping up in the oil and gas sector.

Even so, some companies are still worried about the potential impact. The American Chemistry Council has warned that a stringent ozone rule could thwart plans for factories and petrochemical plants that were hoping to take advantage of cheap shale gas in fracking areas. These groups have asked EPA to focus on fully enforcing its 2008 standard before rolling out a new one.

Industry groups also point out that this is just one of a number of new EPA rules that have been proposed in recent years. There are forthcoming rules on to curtail mercury pollution from coal plants. There are the Obama administration's new climate regulations to cut carbon-dioxide emissions from the electricity sector. And now this.

Republicans will try to fight this new ozone rule in Congress. Back in September, Sen. John Thune (R-SD) introduced legislation that would prevent the EPA from updating its ozone standards until at least 85 percent of counties that aren't meeting the old Bush-era standard are in compliance. Expect bills like that to get a lot of attention next year.

Is the air in the US getting better or worse?

Better. As the chart below shows, the six most common air pollutants in the US have all fallen 72 percent since 1970 — due, in large part, to the Clean Air Act. 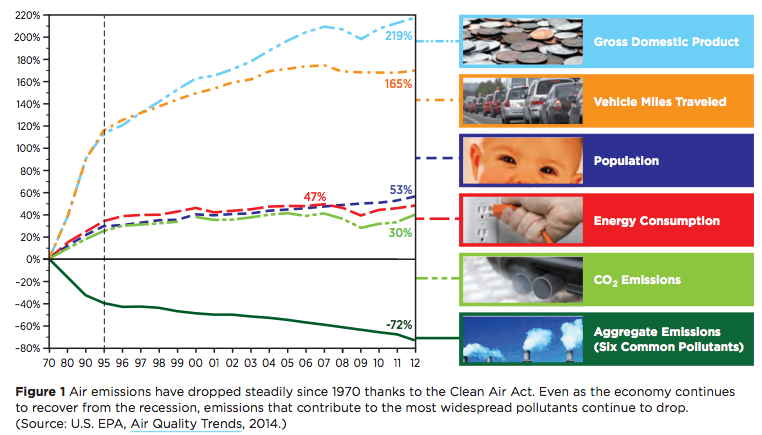 Over that same period, the US economy has grown 219 percent, the number of miles we drive has grown 165 percent, and the amount of energy we use has grown 47 percent.

So that's the very broad view. In the past, at least, the United States has been able to curtail air pollution and still get much, much richer.