When FDR moved Thanksgiving: the presidential power grab that tore a nation apart

Share All sharing options for: When FDR moved Thanksgiving: the presidential power grab that tore a nation apart

Thanksgiving is rarely too far removed from politics. Whether it's the holiday's origins in a 1621 alliance, its first presidential commemoration by Abraham Lincoln at the height of the Civil War, or the contentious arguments many families have over their dinner tables today, political controversy often manages to intrude on a day that celebrates gratitude.

All of those pale, however, compared with the uproar that swept the nation in 1939, when President Franklin D. Roosevelt tried to move the holiday's date. States split on whether to abide by his decree, and for three years many celebrated the holiday on separate dates — with FDR's new chosen date being derisively dubbed "Franksgiving" by Republicans.

FDR carves a Thanksgiving turkey in 1935, four years before he went mad with power and changed the holiday's date. (Franklin D. Roosevelt Library via Digital Library of Georgia)

Since the late 19th century, Thanksgiving had traditionally been celebrated on the final Thursday in November. But in 1939, Roosevelt's seventh year in office, that last Thursday fell on November 30. And that left a mere 24 days of shopping time between Thanksgiving and Christmas.

Retailers believed this would lead to less money spent on holiday gifts, and would therefore hurt the economy (and, of course, their own bottom lines). The solution seemed obvious — the date should be moved one week earlier, to Thursday, November 23. Roosevelt agreed, and announced on August 15, 1939, that he would do just that, with an executive proclamation.

The partisan uproar, from Hitler comparisons to sardine cans

What may have seemed like a wonkish, technocratic, good-government policy clashed with what turned out to be deeply ingrained feelings among many Americans about when Thanksgiving should be celebrated. The Associated Press story announcing the move said Roosevelt "was shattering another precedent," and quoted a town official of Plymouth, Massachusetts, saying the traditional date was "sacred."

In addition, it's unclear that the president anticipated how much of a problem his big-government solution would pose to an active, and prescheduled, day of football. The New York Times reported that on the day of the announcement, "most football managers were too dumbfounded for any comment other than expressions of amazement." Frightening projections were thrown around that game attendance could fall by as much as half.

Republicans pounced, and used the move to portray Roosevelt as a power-mad tyrant. In an early example of Godwin's Law, FDR's recent presidential opponent Alf Landon said Roosevelt sprung his decision on "an unprepared country with the omnipotence of a Hitler." Sen. Styles Bridges of New Hampshire suggested that while Roosevelt was at it, he should abolish winter.

Accordingly, many GOP governors announced they would refuse to move Thanksgiving's date. Kansas Gov. Payne Ratner said that in his state, "we do not destroy tradition merely to gain newspaper headlines." And Time reported that Maine's Republican governor, Lewis Barrows, refused to carve a turkey at a banquet on the earlier date, and "whipped from his pocket a can of sardines instead."

But it was the Republican mayor of Atlantic City, Charles D. White, who would bestow an enduring name on the controversy. When New Jersey's Democratic governor, Harry Moore, agreed to move the date, White announced, tongue in cheek, that Atlantic City would celebrate the earlier date only "as 'Franksgiving,' in honor of our President."

In the end, only 23 out of 48 states ended up moving the holiday to FDR's preferred date — with a few others, including Texas and Colorado, celebrating on both Thursdays. 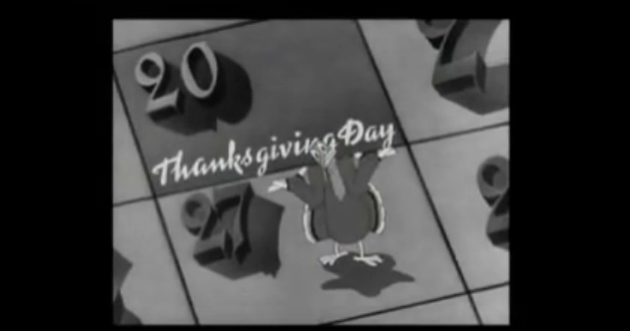 As 1941 began, the controversy still raged, with FDR setting that year's date for the particularly early November 20. That year, two-thirds of states opted to go along. An animated sequence in the film Holiday Inn — which starred Bing Crosby and Fred Astaire and premiered the song "White Christmas" by Irving Berlin — portrayed a confused turkey jumping back and forth between those two dates on the calendar, as you can see above.

But in May of that year, Roosevelt changed his mind again, and announced he'd move the date back in 1942. The Times reported that FDR "conceded frankly that the Commerce Department had found that expected expansion of retail sales had not occurred" — and he had concluded it was an "experiment" that "had not worked." (Interestingly enough, though, more recent research indicates this judgment may have been mistaken. A study by professor Robert Urbatsch of Iowa State found that "an earlier Thanksgiving appears to serve as economic stimulus in the labor market.")

However, things didn't go back entirely to the way they were before. At the end of 1941, Congress passed, and Roosevelt signed, a joint resolution setting Thanksgiving as not the final but the fourth Thursday in November. Essentially, that means that Thanksgiving will fall between November 22 and 28 — never on the month's last two days. The new law struck a sensible balance between the business interests of retailers and Americans' beliefs that Thanksgiving shouldn't be too early, and it has lasted ever since.