Energy East is Canada's alternative to Keystone XL. And it's in trouble.

Share All sharing options for: Energy East is Canada's alternative to Keystone XL. And it's in trouble.

What is the Energy East project? 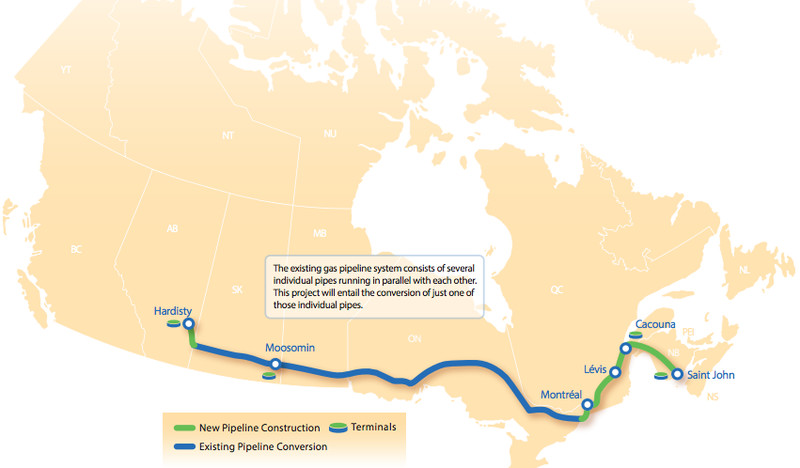 Energy East is a $12 billion pipeline project by TransCanada — the same company behind the Keystone Pipeline. The idea is to reconfigure existing natural gas pipelines to carry crude oil from Alberta to shipping terminals in eastern Canada.

If built, Energy East would be even bigger than Keystone XL

If built, Energy East would transport 1.1 million barrels of crude oil per day — more than the 830,000 barrels per day that Keystone XL would.

What's the point of this? Over the last decade, spurred on by high oil prices, energy companies have been mining Alberta's oil sands (once known as "tar sands") for oil. They just need a way to ship this oil to refineries who can turn it into gasoline and other usable fuel.

Some of this oil is being shipped out of Alberta by rail. Some by existing pipelines. But for the industry to expand further, it needs more shipping capacity. And railroads are harder to scale up quickly. So the industry has been looking at pipelines.

So why is Energy East in trouble?

This week, the Quebec government came out and imposed strict new conditions on the project. That may not be enough to kill the pipeline altogether, but it's a significant new hurdle.

One poll found that two-thirds of Quebecers are against the project. Many protestors oppose it for the same reason that environmentalists in the US oppose Keystone XL — more pipelines would allow Alberta's oil sands to expand, which means more fossil fuels that exacerbate global warming.

The Quebec government has imposed strict conditions on the project

Some context here: Canada has currently pledged to curtail its greenhouse-gas emissions 17 percent below 2005 levels by 2020 as part of efforts to tackle global warming. Most analysts think that the country will miss that goal — in part because the country's oil and gas sector has seen a dramatic expansion over the past decade.

At the same time, the Quebec government has specific local concerns, like the prospect of pipeline spills or the fact that the project would mean more supertankers encroaching on a habitat for beluga whales on the St. Lawrence River.

Both Quebec and Ontario recently spelled out a list of seven broad requirement that must be followed before any pipeline that goes through eastern Canada is approved, including new environmental protections and spill response plans.

That at least makes the fate of Energy East murkier. Ultimately, Canada’s National Energy Board reviews all pipeline proposals that cross provincial borders and the prime minister's cabinet has the ultimate say on approval. But provinces have say over regional environmental permits and land use, so the Quebec government's opposition could at least delay the project

The premier of Alberta, Jim Prentice, is traveling around Canada trying to make the economic case for the pipeline  "We need pipelines in every direction and that’s an imperative for our province," he said. (On climate change, Prentice argued that Alberta is trying to do its part: the province imposes a $15 per ton carbon tax on oil producers who exceed a certain production limit and is investing in carbon-capture technology.)

There are still other potential options for shipping oil out of Alberta. But if Energy East gets delayed or stopped, that certainly makes the task harder.

Oil producers are shipping more oil by rail — about 165,000 barrels per day in the second quarter of 2014. Still, that's significantly less than could be shipped by either Keystone XL or Energy East alone. And rail bottlenecks mean that producers have to pay a premium to ship by trains. When oil prices were sky-high, that wasn't a problem. But now that global oil prices are falling, the extra cost of rail could start to pinch.

Meanwhile, there are still other pipeline projects out there — though they could also run into hurdles. Another company, Enbridge, is in the process of expanding an existing oil pipeline that runs from Alberta to Wisconsin, a pipeline that could ultimately be comparable in size to Keystone XL. Some US environmental groups are calling on the State Department to scrutinize this expansion.

Enbridge is also proposing a $7.9 billion Northern Gateway project that would transport oil from Alberta's oil sands to western Canada, where it could be shipped to Asia. This one has received tentative federal approval (with conditions), but it's also met steep opposition from First Nations tribes.

Are Canada's oil sands in danger?

But if more and more pipelines are blocked, it becomes that much harder to expand.

There's also the matter of falling oil prices. Energy companies first started flocking to Canada's oil sands because prices were high. Even though it takes extra effort to extract oil from these sands, it was worth it. But global prices are now falling, and that could put a crimp in production whether or not a pipeline gets built. By some estimates, many of Canada's oil sands projects start to become unprofitable when the price of oil falls to around $65 per barrel or lower.

Further reading: 9 questions about the Keystone XL pipeline you were too embarrassed to ask