An organ shortage is killing people. Are lab-grown organs the answer?

Share All sharing options for: An organ shortage is killing people. Are lab-grown organs the answer?

The medical need for organ transplants far outstrips our supply, and the gap is only getting worse. One possible solution may be to grow custom-made organs for people out of their own cells.

It may sound crazy, but it's already happening. Humans are currently walking around with artificial bladders, urethras, windpipes, and vaginas — all grown from their own cells in a laboratory.

Advances in the basic biology of how these cells normally grow and develop in the body, combined with technological advances in materials and fabrication, have led to a boom in research within the past decade or so. And today, many top universities have labs dedicated to engineering tissues and organs.

"When we started out in the field about 25 years ago, a lot of this was considered science fiction," says Anthony Atala, of the Wake Forest School of Medicine, who's a real leader in this area. "Then the field exploded, of course, as soon as there were a few successes."

However, some body parts are far more difficult to make than others. The relatively simple tube of the urethra is nothing compared to the liver or the kidney's complex architecture, with various cell types all working together to do some fairly complex things. So far, scientists haven't demonstrated that they can make something as complicated as a liver work inside a person. (We still rely on organ donors for those.) But they're certainly working on it.

Here's what you need to know about lab-grown organs:

The need for more organs is real, and growing 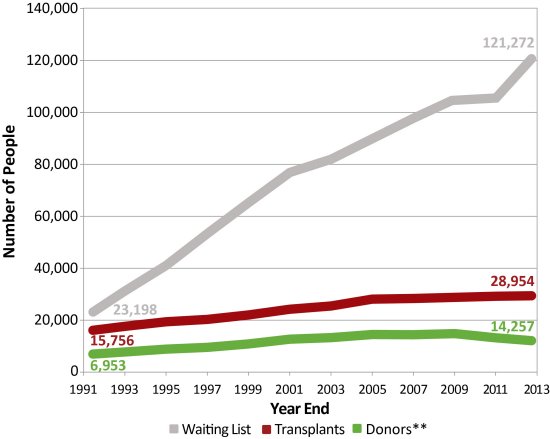 The gray skyrocketing line on this graph is the number of patients waiting for organ donations in the US: more than 120,000 people. And about 18 people in the US die each day because they haven't received a donation. (By the way, note that there are more transplants than donors here — likely because one donor can provide multiple organs, especially if the donor is deceased.)

Obviously one way to help fix the shortfall would be to get more people to sign up to be donors. But even organ donation isn't a perfect system. For one, the body will naturally react against tissue from someone else. The body is very good at sensing and attacking foreign invaders, and this includes organs from other people. Although doctors match organs as carefully as they can, based on blood type and other biological factors, the body's foreigner-detection system is so sophisticated that it can generally tell that something's not quite right.

This problem is called "rejection," and it's a major issue with organ transplants. Many patients have to be on drugs that suppress their immune systems for the rest of their lives in order to stop their bodies from attacking their transplanted organ.

This is one reason why many scientists are interested in an alternative strategy: making replacement organs out of a patient's own cells. There's no risk of rejection when you're your own organ donor.

Researchers have already started giving some patients organs made out of their very own cells. Although these aren't necessarily the most complicated organs around, it's a promising start.

In 2006, Anthony Atala's group at Wake Forest School of Medicine published a paper in the Lancet describing how they had made bladders for seven patients out of their cells, and the patients had been doing very well after five years of observation.

And research in this area continues to accelerate. In 2011, surgeons in Sweden gave a man with cancer the first windpipe made out of a patient's own cells. Several others have received similar lab-grown windpipes since.

That same year, Atala's group announced that they had created artificial urethras for five boys who had damaged theirs (again, from the patients' own cells). All five were doing well.

And, more recently, in April of 2014, Atala's group published a paper showing that they had successfully implanted lab-grown vaginas in four female teenagers whose vaginas never formed normally. Scientists grew the organs using cells from the patients' vulva tissue. Then, they surgically implanted the vaginas and attached them to the patients' healthy uteruses. Over the following years, the women were able to regain normal function, including menstruation and sex.

How to make an organ in the lab

Techniques vary, but they tend to have a similar strategy (note, this includes many experimental methods that have yet to be tried out in people):

1) Scan the patient's organ. Sometimes researchers first scan the patient's body to determine exactly what size and shape their existing organ is. This allows them to make a replacement that perfectly matches those parameters. For example, you'd probably want a new windpipe that fits your throat.

2) Create a scaffold. The scaffold is in the shape of the organ and will give the cells something to grow on. Sometimes researchers do this by reusing the natural scaffolding of a natural organ. They'll take a donor organ and dissolve all the cells until nothing is left but the dead structural material. Other times, they'll create the scaffold from scratch, using things like 3D printing and other techniques to generate its intricate shape.

3) Add cells. Ideally, these cells come from the patient. Sometimes they will be able to get the right cell type straight from the patient. And in other research, they'll use precursor cells, such as stem cells, which scientists then direct to become what they need by providing the right molecules in their environment.

4) Put it in a bioreactor. This is a fancy name for a body-temperature environment with plenty of oxygen and food and everything else the cells need to grow and multiply. Cells can create an organ fairly quickly. For example, human bladders take several weeks.

One obstacle? Cells can be very picky

A key step in making artificial organs is being able to grow various kinds of human cells in a laboratory. And for a long time, this was a major hurdle. (It still is for some types.)

Each specialized type of cell in your body needs certain chemical clues from its environment in order to thrive and multiply. And even a simple-seeming body part, like a urethra, requires more than one cell type, arranged in certain ways relative to one another.

Cells also need the right kinds of structures to climb on and stick to. And some need to feel appropriate kinds of physical forces from their environments, as well. Researchers have done a ton of work painstakingly figuring many of these signals out. "It was all very basic biology," says Atala.

Sometimes researchers need to use stem cells rather than adult cells. And in that case, they need to figure out how to tell these cells to become what they need. A major factor now allowing this research to flourish is basic research into what kinds of environmental cues tell the body to produce certain types of cells in the womb.

Kidneys are needed the most, but they're really difficult to make

About 80 percent of people waiting for organs are waiting for kidneys. But creating artificial organs like livers, hearts, lungs, and kidneys is way more difficult than the kinds of organs researchers have implanted into people so far.

The structures of these solid organs are very complex — they're not just sheets (like skin) or tubes (like windpipes or urethras), but contain an intricate architecture of many different cell subtypes.

Researchers have made some initial demonstrations in rodents. They've put lab-grown kidneys in rats and lab-grown lungs and tiny "liver buds" in mice. (However, these organs don't necessarily work as well as the real thing or last all that long.)

And scaling up is a huge hurdle. The bigger the organ, the more blood vessels it needs to get nourishment all throughout the cells hidden inside. And this includes capillaries — blood vessels smaller than a human hair. Making those isn't easy, but researchers are using various techniques, including 3D printing, to create those exceptionally tiny but vitally important features. The key to going big is going small.