Everything you need to know about occupational licensing

Share All sharing options for: Everything you need to know about occupational licensing

What is occupational licensure?

Jestina Clayton learned traditional African hair braiding as a young girl in Sierra Leone. In 2006, after immigrating to the US, Jestina started a hair braiding business in Utah to help support her family while she and her husband attended college. But after a few years, the state of Utah told her she needed a cosmetology license in order to continue her business. That would require 2,000 hours of training, little of it related to hair braiding.

These kinds of barriers to the workplace are known as occupational licensure, and they have gotten increasingly common in recent years. In the 1950s, only 70 occupations had licensing requirements, and these accounted for 5 percent of all workers. By 2008, more than 800 occupations were licensed in the various states and they accounted for 29 percent of all workers. Licensed occupations include everything from barbers and interior designers to nurse practitioners and physicians.

Defenders of licensing regulations argue that they are needed to make sure that service providers meet minimum standards of quality and safety. In order to get a license, prospective applicants typically need a minimum level of education, they often need to pass an exam and to meet other qualifications.

Quality and safety are important issues because consumers often have difficulty obtaining information about service providers. How can I tell if my doctor knows what she is doing or not? Her medical license tells me that she at least has a minimum level of competence and knowledge.

But while this argument might make sense for doctors, it doesn't seem so strong for other professions such as flower arrangers or interior decorators.

Also, many professions have licensing requirements that vastly exceed any plausible health and safety rationale. In the states where they are licensed, interior decorators are required to pass a national exam, pay fees, and devote six years to education and apprenticeship. Yet studies show little safety or quality benefits: interior decorators do not have lower insurance premiums, lower rates of fire deaths, or fewer complaints to the Better Business Bureau in states that impose these requirements.

Why do states have so many licensing restrictions?

Licensing restrictions raise the incomes of practitioners by limiting competition; so incumbent service providers have a strong incentive to lobby for stricter regulations. Many professions have been lobbying for stricter regulations over the last several decades. In 1995 alone, 850 health professions licensure bills were introduced in state legislatures and more than 300 were enacted into law. That’s an average of 17 new health licensing bills introduced and 6 enacted in each state in a single year. The Bureau of Labor Statistics only counts 50 detailed occupations in healthcare, so this level of legislative activity is quite high. And there were many other bills for non-health occupations.

Lobbying appears to have played a large role in determining the success of many of these measures. One study explored the factors accounting for differences between states in whether they licensed five different occupations. The most important determining factors were political influence and whether professional organizations funded a licensing initiative. In short, political influence peddling was a key difference in whether a state licensed an occupation. Occupational licensing benefits small occupational groups. But when those groups are well organized and funded, they can be far more motivated and far more successful than representatives of diffuse consumer interests.

Why has there been a recent surge in occupational licensing? The greater role of money in politics may be one reason. Lawrence Lessig reports that the mean cost of winning a Congressional seat has risen to over one million dollars, a six-fold increase since 1974, after adjusting for inflation. Spending on races for state legislatures has risen in parallel. A large part of those campaign funds comes from professional organizations.

How do professions use licensing rules to limit competition?

In many cases, the law gives regulatory powers to licensing boards composed of members of the profession or occupation being regulated. These boards can limit competition by restricting entry into the occupation and by restricting the activities that different occupations can perform. Less competition means they can earn more. There are a number of ways these boards can create entry roadblocks for would-be competitors.

Many restrictions apply only to prospective newcomers to the occupation, not to the professionals who are already practicing. In these cases, incumbent professionals are protected from competition without having to meet the same requirements.

How does licensing restrict the work occupations can do?

Licensing doesn't just lock people out of occupations, it can also limit competition between occupations. In some industries, work is divided across many occupations, each of which is licensed. This is especially true in healthcare, where 76% of the non-physician jobs are subject to licensing, ranging from nursing assistants to radiologic technicians to nurse practitioners. Regulations limit what different occupations can do and how they are supervised.

For example, Cathy Kasprak is a dental hygienist in rural western Maine. She inspects her patients’ teeth and gums, cleans them, takes x-rays, and applies protective treatments and temporary fillings. Cathy works independently, providing dental care to patients who cannot easily get to a dentist or who cannot afford one. She refers patients to dentists for tasks that she cannot perform.

Cathy is lucky she works in Maine, where lawmakers recently changed the law to allow hygienists to work independently, although with significant restrictions. In most states, dental hygienists like Cathy are not permitted to work at all outside a dentist’s office, despite a nationwide shortage of dentists.

These "scope of practice" regulations limit competition between dentists and hygienists, but they also drive up the cost of routine dental care. These high costs are one reason that one in three Americans don’t get dental care each year. The numbers are far worse for poor and rural Americans.

How much does excessive licensing harm consumers?

Licensing raises costs and reduces consumer choice, and research has found that these costs are economically significant. For example, economists Morris Kleiner and Alan Krueger have found that licensing is associated with about 18% higher wages on average, and those higher costs are often passed on to consumers. Economists have estimated that entry restrictions on non-physician health care workers cost consumers over $100 billion per year.

Dentistry provides a striking example of how excessive regulation can harm patients. Dental fees are substantially higher in states that do not recognize out-of-state licenses for dentists. The Federal Trade Commission found that just the regulations on the roles of dental hygienists and the numbers working per dentist raised dental fees by 7 to 11%. 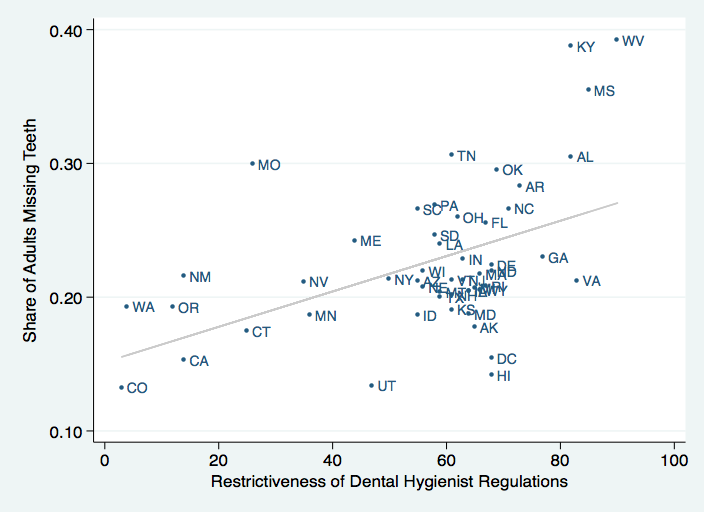 The figure shows that on average, states with stricter regulations of dental hygiene perform worse on one measure of oral health: the percentage of adults who have lost teeth from tooth decay or gum disease. Dental hygienists provide preventive care that can avert tooth loss. States with the most restrictive occupational regulations have about twice as many adults who have lost teeth. While factors other than regulation affect oral health, careful studies (and this one) find a robust relationship between regulation and access to care.

How much does excessive licensing harm workers?

Occupational regulation restricts entry into the occupation. This means fewer jobs, but the jobs that do exist may earn higher wages. So entry restrictions sometimes benefit incumbent workers, but harm prospective ones. The number of "missing" jobs may be quite substantial. For example, economists estimate that entry restrictions on non-physician health care workers cost consumers over $100 billion per year. This corresponds to about half a million fewer jobs for mid-skill health workers.

Also, when multiple occupations within a field are licensed, regulation may boost wages only for the most highly paid occupations. The wages of mid-skill occupations are influenced by regulations controlling what tasks workers are allowed to perform. Regulations on the scope of practice have been found to reduce the wages of dental hygienists and nurse practitioners.

Which states have the most restrictive licensing regimes?

The Institute for Justice, a libertarian public interest law firm, conducted a survey of state licensing laws. They examined 102 low-wage occupations such as preschool teacher, barber, security guard, and tree trimmer. This chart shows the percentage of those professions that were subject to licensing requirements in each of the 50 states. 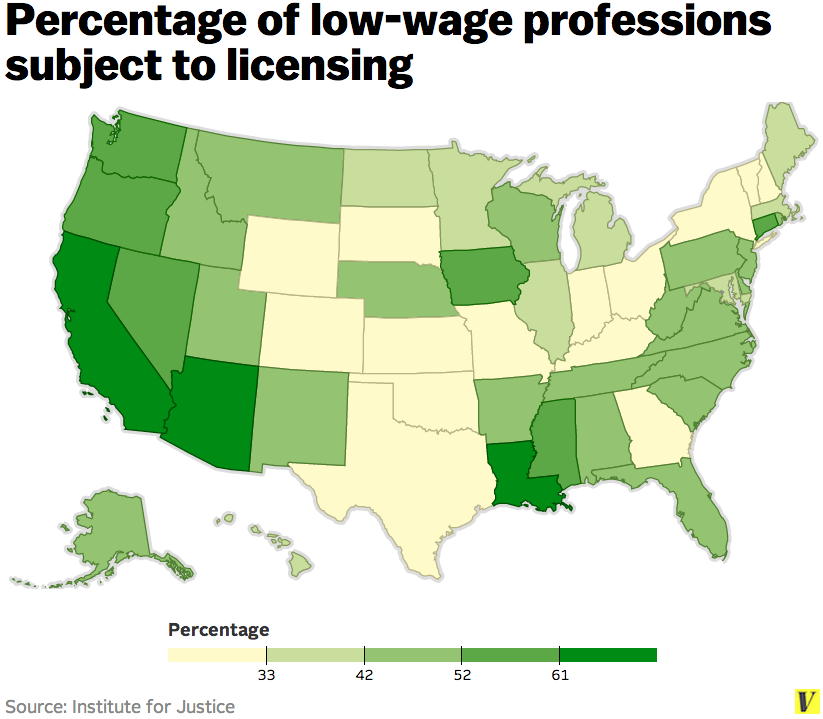 Are there alternatives to occupational licensing?

Licensing is designed to ensure that consumers are not harmed by dishonest or incompetent service providers. But licensing is not the only way to accomplish this goal. Many occupations are certified rather than licensed. Certification also requires education, training, and examinations. But there's a big difference: certification is voluntary. You can’t work without a license; you can work without being certified.

For example, to be certified as a surgeon, a medical doctor needs to complete a surgical residency, pass oral and written exams, and maintain that certification with renewal training and exams. But a doctor who has not been certified can legally perform surgery.