Everything you need to know about Jobs Day

Share All sharing options for: Everything you need to know about Jobs Day

What is Jobs Day?

Jobs Day is the econ dorks' nickname for the first Friday of every month when the Bureau of Labor Statistics releases its monthly Employment Situation Report at 8:30 AM.

The Employment Situation Report tells us what the unemployment rate is, and also how many jobs the economy added (or lost) over the previous month. It also offers revisions to the previous two months' worth of jobs numbers.

The household survey is also known as the Current Population Survey and it's basically a big poll. The BLS calls people up and asks them questions about a variety of issues that are relevant to assessing the labor market. For example, they ask whether you have a job. If you don't have a job, they ask whether you're looking for a job. If you do have a job, they ask how many hours you're working. If you're working part-time, they ask if you'd like to have a full-time job.

The reason for this survey is that a lot of important labor market concepts require us to know how people feel about their current labor market situation. An increase in the number of people who want part-time jobs is one kind of issue for the economy. An increase in the number of people who are having trouble getting as many hours of work as they would like to have is another kind of issue. People retiring early amidst a booming stock market is different from people leaving the labor force because they've been unable to find a job after a year of searching.

The establishment survey is a survey of workplaces where the BLS asks how many people are working at any given facility.

What is the labor force participation rate?

Starting in the mid-1960s this indicator rose fairly steadily as women joined the workforce. But after peaking at around 67 percent in 1999-2000 it has tended to decline. LFP decline has been especially steep since the financial crisis and is currently just above 63 percent, a level not previously seen since the late 1970s.

What is the unemployment rate?

The unemployment rate rose sharply in the wake of the 2008 financial crisis, and has been falling since 2010.

What are the other unemployment rates?

The main unemployment rate that you hear about is what the Bureau of Labor Statistics dubs U3 — unemployed workers divided by the total labor force, with the labor force defined as employed people plus currently jobless people who are actively looking for work.

But there are alternative unemployment rates you can also measure:

Naturally, at all times the U6 unemployment rate is higher than the U3 rate. But during the current recovery the gap has been unusually large due to an increase in the number of discouraged and marginally attached workers during a period of prolonged economic weakness

Why do people pay attention to jobs day?

In a secondary sense, jobs day is a big deal because it matters to financial markets. A surprising employment situation report leads investors to update their thinking about the state of the economy and also their ideas about the Federal Reserve's next move. The jobs report moves financial markets. It also becomes a political football during election years, as good jobs reports are thought to reflect well on the incumbent president while bad jobs reports reflect poorly on him.

Last but by no means least, jobs day is a media event. Because the report's release is utterly predictable but its contents are unpredictable, every jobs day is eagerly awaited by econ enthusiasts on Twitter. The headline data is processed in minutes, and fairly deep analysis can be expected within half an hour.

Is the jobs report even accurate?

The employment situation report really is the most important and most accurate piece of big picture economic data that we get on a month-to-month basis. That said, this is a bit like the warmest day in Antarctica-the information simply isn't that informative.

Compared to the over 130 million jobs in the United States, the establishment survey's +/- 100,000 jobs margin of error is quite small.

But relative to the change in employment in a typical month, it's a pretty huge margin of error. Blindly guessing that next month's report will say the economy added 100,000 jobs will put you within the margin of error about 85 percent of the time.

Another way of looking at it is that any given month's jobs number is revised several times in subsequent months. On average, the final number is 90,000 jobs more or less than the original numbers. We should, however, distinguish these concerns about survey error and revisions from conspiracy theories about manipulation of the numbers for political purposes.

Measuring the economy in real time is hard. Ignoring the jobs report is foolish, but overreacting is equally foolish.

What’s up with seasonal adjustments?

The labor market is subject to a lot of calendar-based fluctuations driven by things like holiday season demand, summer vacation from school, and the difficulty of undertaking construction projects in cold weather. To see the difference, check out this chart: 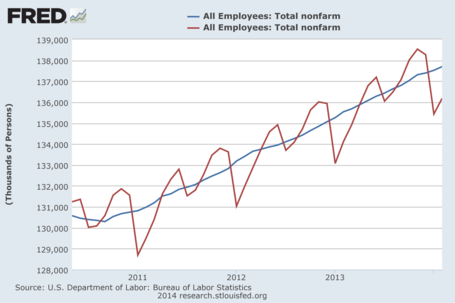 The blue line is the jobs number you normally see reported in the media. The red line is what's actually happening. The blue line shows three years of slow-but-steady job growth. The red line shows annual depressions in January when stores lay off their holiday hires and small recessions in the fall when kids go back to school.

The blue line is more useful for assessing macroeconomic conditions, which is why it's the one people talk about. But it's also a statistical construct — a mathematical model based on past experience — that can get things wrong when the underlying structure of the economy shifts or even if unusual weather skews the model.

What's the best way to read the jobs report?

The most solid piece of information in any monthly jobs report is the revisions made to the previous two months' data. So the best way to tell whether the news is bad or good is to look at those. An upward revision is better than a downward revision, of course, but it's actually where the revisions end up that matters. If the jobs report tells you that the economy added a lot of jobs two months ago, that's a solid datapoint that you can take to the bank.

On the household survey, the unemployment rate is obviously interesting. But in some ways it's even more illuminating to look at the size of the labor force. To an extent this is driven by broad social and demographic trends. But on a month-to-month basis, a strong economy should be pulling more people into the labor force while a weak economy pushes them into early retirement or extra years of school. Since it's the existence of data on the size of the labor force that makes the household survey valuable, you might as well zero-in on that.