Share All sharing options for: Lava from Hawaii's Kilauea volcano is about to engulf a nearby town

For months, the town of Pahoa on Hawaii's Big Island has been watching in horror as volcanic lava creeps closer and closer, swallowing everything in its path. Now the lava flow has finally reached the town — and is forcing residents to flee.

Authorities are preparing to evacuate the town of 900 people

The lava is coming from the Kilauea volcano, which has been erupting more or less continuously since 1983. In recent years, those eruptions haven't posed a major problem for people living on the island — the lava was mostly just flowing south into the ocean.

But since June 27, 2014, a fresh lava flow has been traveling northeast, gradually making its way toward the 1,000-person town of Pahoa. On Tuesday, October 28, the lava flow began entering private property on the outskirts of town and was just a day away from reaching the central road. At least 50 homes lie in the lava's path, and many residents have already been forced to flee.

Here's an updated map from the US Geological Survey showing the situation. The red is, as you might guess, the lava — which is hotter than 1,650 °F:

And here's an aerial photo:

The flow front was heading towards a low spot on the Pāhoa Village Road, between Apaʻa St. and the post office. (US Geological Survey)

The USGS notes that the lava flow is now moving as fast as 17 yards per hour — and, as of Tuesday, was just 340 yards away from Pahoa Village Road, the central road in town.

So far, the lava has overrun a (mostly Buddhist) cemetery, two roads into town have been closed, and at least 50 homes now lie in the lava's path. Officials are evacuating residents in danger, although many have been allowed to linger and take pictures for insurance purposes.

The USGS has a ton of photos of the flow. Here is the lava busting down a fence onto private property on Tuesday, October 28:

Here is lava running through another barbed wire fence on October 27: 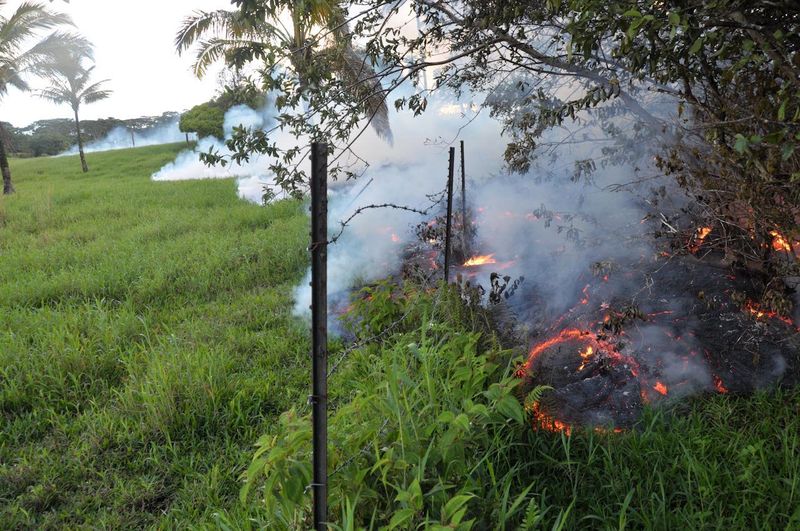 Late on Sunday afternoon, a barbed wire fence is overrun by lava from the June 27th flow lobe that crossed through the Pāhoa cemetery earlier in the day. To the far left in the distance, a plume of smoke marks the location of the flow lobe that passed southeast of the cemetery and through the pasture. (US Geological Survey)

Here's an earlier picture of lava encountering a shed on October 25. The shed did not fare well: 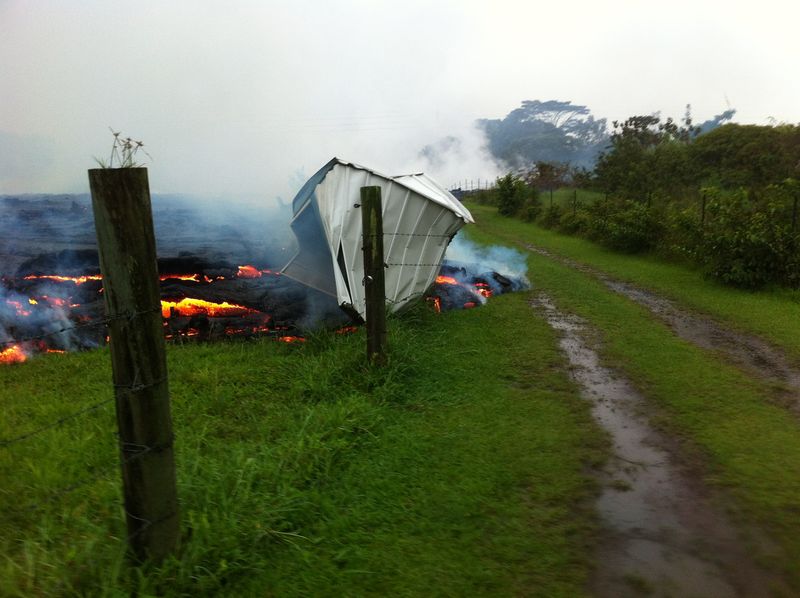 A small shed is consumed by lava in the pasture between the Pāhoa cemetery and Apaʻa Street on October 25, 2014. (US Geological Survey)

Here's what the lava looks like when it's destroying a road: 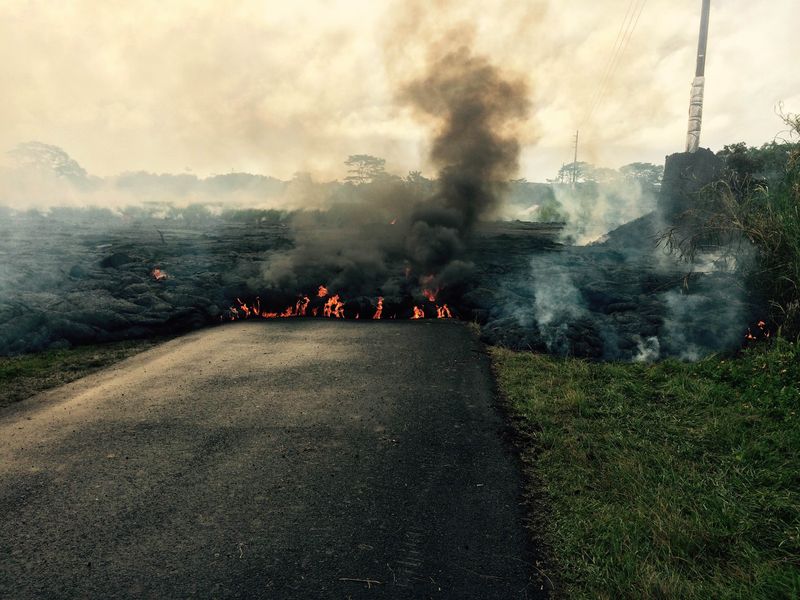 The lava flow crossed Apaʻa Street / Cemetery Road at 3:50 AM, HST, Saturday morning, October 25, 2014. In this photo, which was taken at about 9 AM Saturday, the flow is moving from right to left, with burning asphalt visible along it's NW margin. A utility pole, far right, was surrounded by lava but remained standing at the time of the photo. The hope is that the protective insulation and cinder/cement barrier around the pole will prevent it from burning through. (US Geological Survey)

Here's what the lava looks like when it cools: 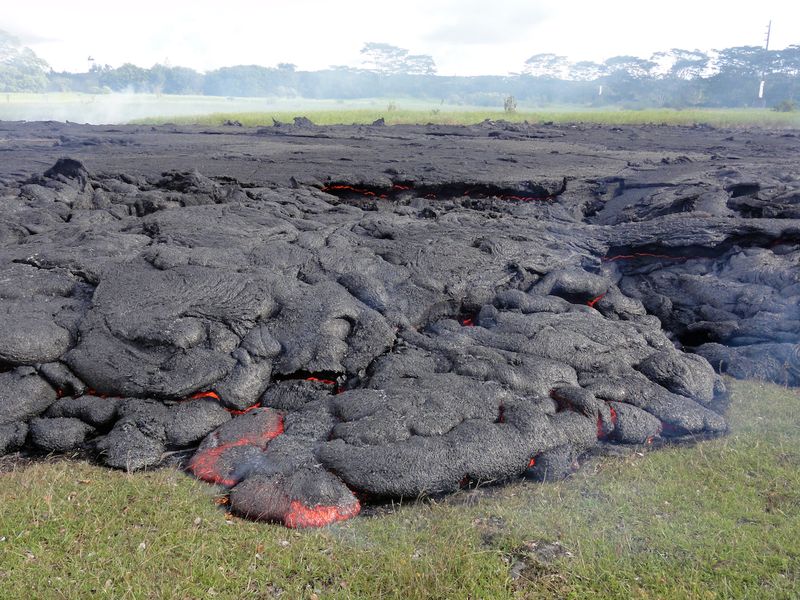 A typical portion of the pāhoehoe flow margin near the flow front, just downslope of Cemetery Rd./Apaʻa St. The horizontal incandescent cracks seen in the center and right portions of the photo indicate that the flow was inflating. Pāhoehoe inflation is driven by continued supply of lava beneath the surface crust, which slowly raises the surface. (US Geological Survey)

Last month, Hawaii's governor declared a state of emergency for the area.

Where did Kilauea come from?

The prevailing theory on how the Hawaiian Islands formed goes like this: For the past 70 million years or so, the Pacific tectonic plate has been slowly passing over the Hawaii hotspot, an unusually hot and active region that (possibly) originates from deep within the Earth's mantle.

As the tectonic plate moves northwest, the hotspot has created a series of volcanoes that spewed out volcanic material and created a chain of underwater mountains in the Pacific — as well as, most recently, the Hawaiian islands: 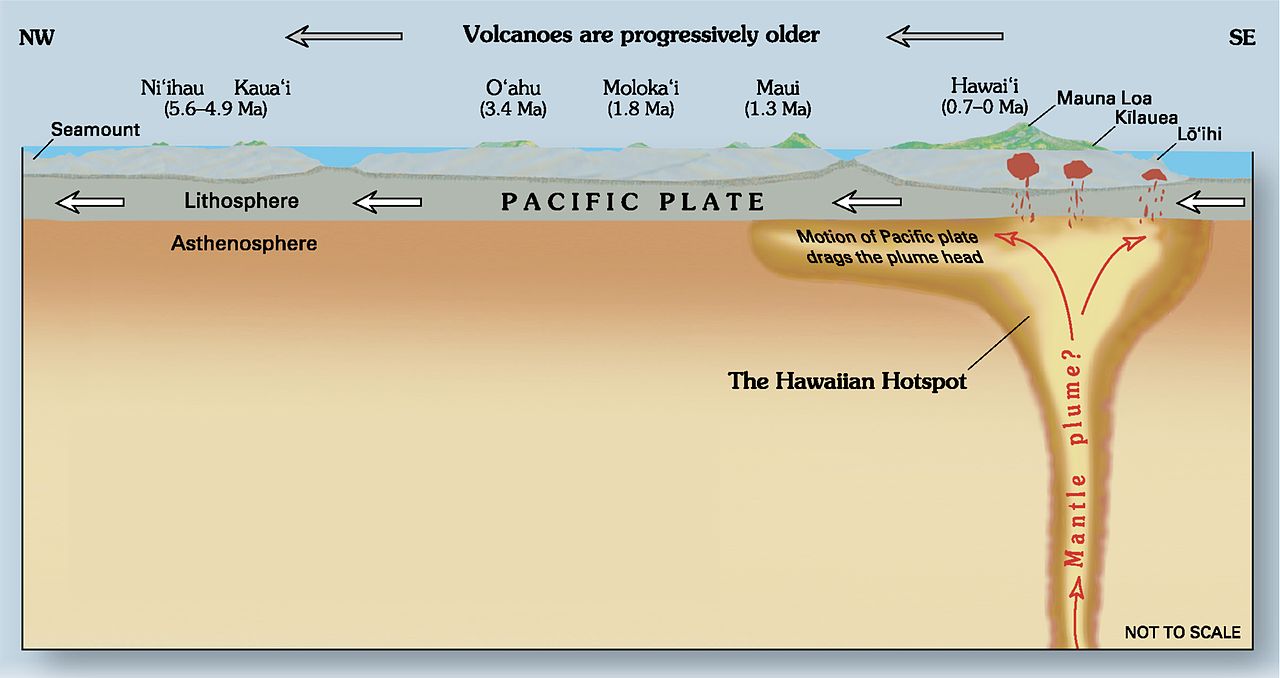 (Note that some recent work has cast doubt on the idea that the "hotspot" stretches all the way down to the mantle, so there's still lots of active debate over the specifics here.)

The big island of Hawaii is the most recent of these islands to emerge and was formed by five different shield volcanoes erupting one after the other. The youngest of those volcanoes, Mauna Loa and Kilauea, are still active and sit above the hotspot (see graphic right). 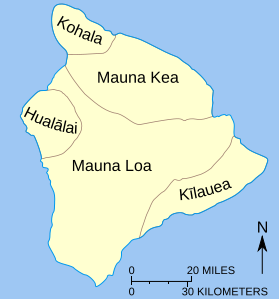 (By the way, there's actually another volcano forming even further to the southeast of the island, named Loihi. That volcano is still underwater — it's expected to reach the surface and become a island in the next 10,000 to 100,000 years. And there should be more volcanoes after that.)

Kilauea erupts pretty much constantly — save for a brief respite in the 1930s and '40s. The current eruption, which started back in 1983, is now one of the longest-lived in the world and has now gone through multiple stages, as new vents opened up. Over time, this ongoing eruption has destroyed a variety of man-made structures on the island — including the visitor's center in Hawaii Volcanoes National Park in 1986. In 1990, the volcano had a particularly violent eruption that destroyed more than 100 homes in the town of Kalapana.

In the past few years, however, the volcano seemed to have settled down a bit and the lava was mostly flowing south, into the ocean. But on June 27, 2014, a fresh vent opened up on the volcano's northeast flank, and lava began slowly streaming in a new direction — straight toward the town of Pahoa.

(Sort of) related story: What would happen if the Yellowstone supervolcano actually erupted?