Deforestation in Brazil is surging again — after years of decline

Share All sharing options for: Deforestation in Brazil is surging again — after years of decline

Brazil's battle against deforestation was one of the big environmental success stories of the last decade. Between 2005 and 2012, the amount of Amazon rainforest cut down each year fell by 70 percent.

But the good news didn't last. Deforestation in the Brazilian Amazon started ticking up again in 2013. And early satellite data now suggests that the amount of forest being cleared away is surging dramatically in 2014 — increasing 190 percent in August and September compared with the previous year. 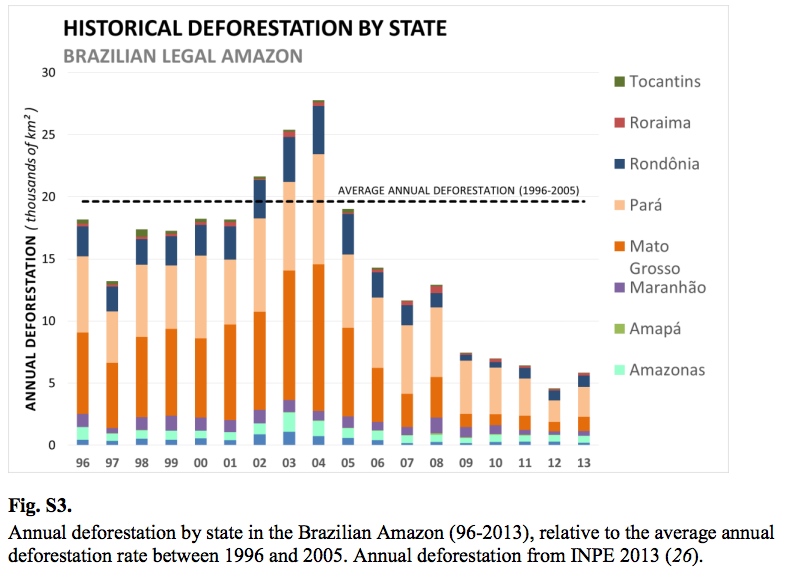 The 2014 increase in deforestation was first reported by Imazon, a Brazilian non-profit, which used satellite data to estimate that 838 square kilometers (323 square miles) of rainforest was cleared in August and September of 2014. That's a 190 percent increase over the 288 square kilometers cleared in the same period last year.

The data shows a rise in deforestation all around the country. In the western states of Mato Grosso and Rondônia, forests are being burned and cleared away for cattle grazing and cropland. In the northern state of Para, illegal logging appears to be on the rise. (The government has yet to release its own numbers for 2014, but they're expected to show similar results.)

Deforestation in the Amazon has been a major contributor to the rise of greenhouse-gases causing global warming — as those trees are burned, all the carbon they've stored goes up into the atmosphere. Dwindling forest cover has also been a major reason for the decline of wildlife in the Amazon, one of the most species-rich places on Earth.

Why deforestation in Brazil is rising again

Brazilian president Dilma Rousseff walks during the ceremony for new ambassadors in Itamaraty on Januaty 23, 2013 in Brasilia, Brazil. (Globo/Getty Images)

So why is deforestation in Brazil on the rise after a decade of decline? It depends on who you ask.

Some green groups have blamed the government for weakening protections

Plenty of environmentalists have blamed current Brazilian President Dilma Rousseff for de-emphasizing rainforest protections since coming to office in 2011. Among other things, they argue that, back in 2012, Rousseff helped weaken the country's "Forest Code," which dictates the amount of forest that farmers and timber companies have to leave intact on their lands.

The rainforest has become a hot issue in Brazil's presidential elections, which will hold a final run-off between Rousseff and challenger Aecio Neves on Sunday, October 26. Indeed, Rouseff's track record was reportedly one reason why popular former environmental minister Marina Silver endorsed Neves.

Yet at the same time, experts had long warned that Brazil's crackdown on deforestation wasn't likely to last without major new policies. Deforestation in Brazil fell between 2005 and 2012 for a couple main reasons: 1) The government pushed to protect more areas from logging and burning but also 2) The soybean and cattle industries came under heavy activist pressure to quit expanding through deforestation. So, in recent years, farmers and ranchers have found ways to boost productivity on existing lands rather than clear forest for new space.

It was always going to be tough for those trends to continue indefinitely. Brazil's government is now struggling to enforce a crackdown on illegal logging, particularly as deforestation expands into remote parts of the jungle. Land speculators and arsonists are now learning to evade the environmental police. Meanwhile, as the country's beef and soy industries keep growing, so does the pressure to find new farmland.

Can Brazil pay farmers to stop cutting down rainforests?

Some experts now think it will be much more difficult for Brazil to stop deforestation than it has been in the past. And it might involve a lot more money.

One recent study in the Proceedings of the National Academies of Sciences argued that the Brazilian Amazon was now at a "critical juncture." Current policies to stop deforestation have basically reached the limits of their effectiveness, the authors noted. The Brazilian government would have to resort to new tactics — that, unfortunately, would be much more difficult and expensive.

Among other things, the study's authors found that deforestation in Brazil is largely shifting to remote areas — which are much harder for the government to protect. What's more, the authors noted that deforestation by smaller subsistence farmers is also rising sharply. Because these smaller farmers are often clearing forests for their livelihoods and subsistence, the government can't use the same crackdown techniques it used on larger corporations — to do so, the authors note, was likely to be "politically and socially problematic."

Instead, the authors noted that the government would likely need to turn to incentive-based programs that alleviate rural poverty or programs that essentially pay people not to cut down rainforests. But these programs are neither easy nor cheap. (Outside countries like Norway, Britain, and Germany have committed some $1 billion in financing through the REDD+ program to help Brazil reduce its greenhouse-gas emissions from forestry.)

"Further reductions in deforestation in the Amazon are challenging both because deforestation is happening in more, smaller, and remoter areas and is therefore harder to detect and more expensive to control," said lead author Javier Godar of the Stockhom Environment Institute. "New approaches are needed, particularly to engage smallholders more."

Simon Romero of The New York Times had an excellent story earlier this month on how environmental issues are playing into Brazil's presidential race. He also details some of the problems the government has had in cracking down on illegal logging.

Back in May, Jonathan Watts of the Guardian wrote a great profile of Kátia Abreu, the head of Brazil's agricultural lobby, who is often on the other side of environmentalists on various rainforest issues.